Stern Pinball and ARCADE1UP announces more greatness from the annals of gaming and movie history with availability of new in-home arcade and pinball machines.

Most recently, the two companies have added to their growing libraries of home arcade machines, with Stern pulling from a beloved film franchise and ARCADE1UP reviving a number of iconic arcade games of the 80s and 90s.

Before we get to the fun stuff, Stern Pinball’s long-time president and founder, Gary Stern, recently announced he would be stepping down as president. Stern will remain the company’s chairman and CEO, stating he is still “committed to the future of pinball” but is passing the presidential mantle down to the newly recruited Seth Davis.

Davis brings 13 years of experience from Disney’s gaming divisions to Stern and, according to an official statement made in a press release, Davis comes to Stern with an attitude of enthusiasm and drive. Davis also offered the following quote;

“I’m very excited about the future of Stern Pinball and pinball in general”.

Right before Davis joined Stern Pinball, he led Disney’s Digital Games Console and PC line of business; where he held an executive position, with the rather long — yet impressive — corporate title “Director of Disney Games’ Strategy, Market Analytics, and Product Planning”. Davis was also involved with the creation and launch of Disney+ and ESPN+ and is clearly a well-merited entertainment executive. Hopefully, Davis will be able to take Stern and pinball gaming to new heights.

Back in 2019, Stern Pinball released a rather wild pinball machine based on the blockbuster film series Jurassic Park. Featuring scenarios and artwork inspired by Steven Spielberg’s cinematic CGI wonder, Jurassic Park dropped for a hefty $5,999 and was available primarily for commercial locations.

Recently, Stern’s president, Gary Stern, announced the company was working with Jack Danger of pinball creator and influencer Dead Flip on a home version of the Jurassic Park machine. The pinball machine is the third of Stern’s ‘The Pin’ models, which makes pinball entertainment more accessible for at-home use.

Jurassic Park Pin is the first machine that Danger has designed, and, according to Stern, the pinball Twitch streamer was sure to create a unique unit that’s so much more than a reskin of Stern’s other “home-arcade” machines, namely Star Wars Comic Art Pin and Star Wars Original Pin. Stern’s line of ‘The Pin’ pinball machines come with a few modifications for easy, at-home use, including a ‘no coin operator’ feature and easy-to-assemble construction. However, ‘The Pin’ product line still offer a full-sized playfield.

“Navigate Isla Nublar amidst a volcanic eruption, recapture the escaped dinosaurs, and head to safety in a thrilling scenario sure to send your home 63 million years into the past.”

Stern isn’t the only company looking to the past. ARCADE1UP’s latest announcement pulls from the annals of gaming history to reveal three new home arcade cabinets. Not long after dazzling gamers with Ms. Pack-Man and Street Fighter II machines, the cabinet developer is showcasing its renditions of Killer Instinct, Tron, and Ridge Racer machines. 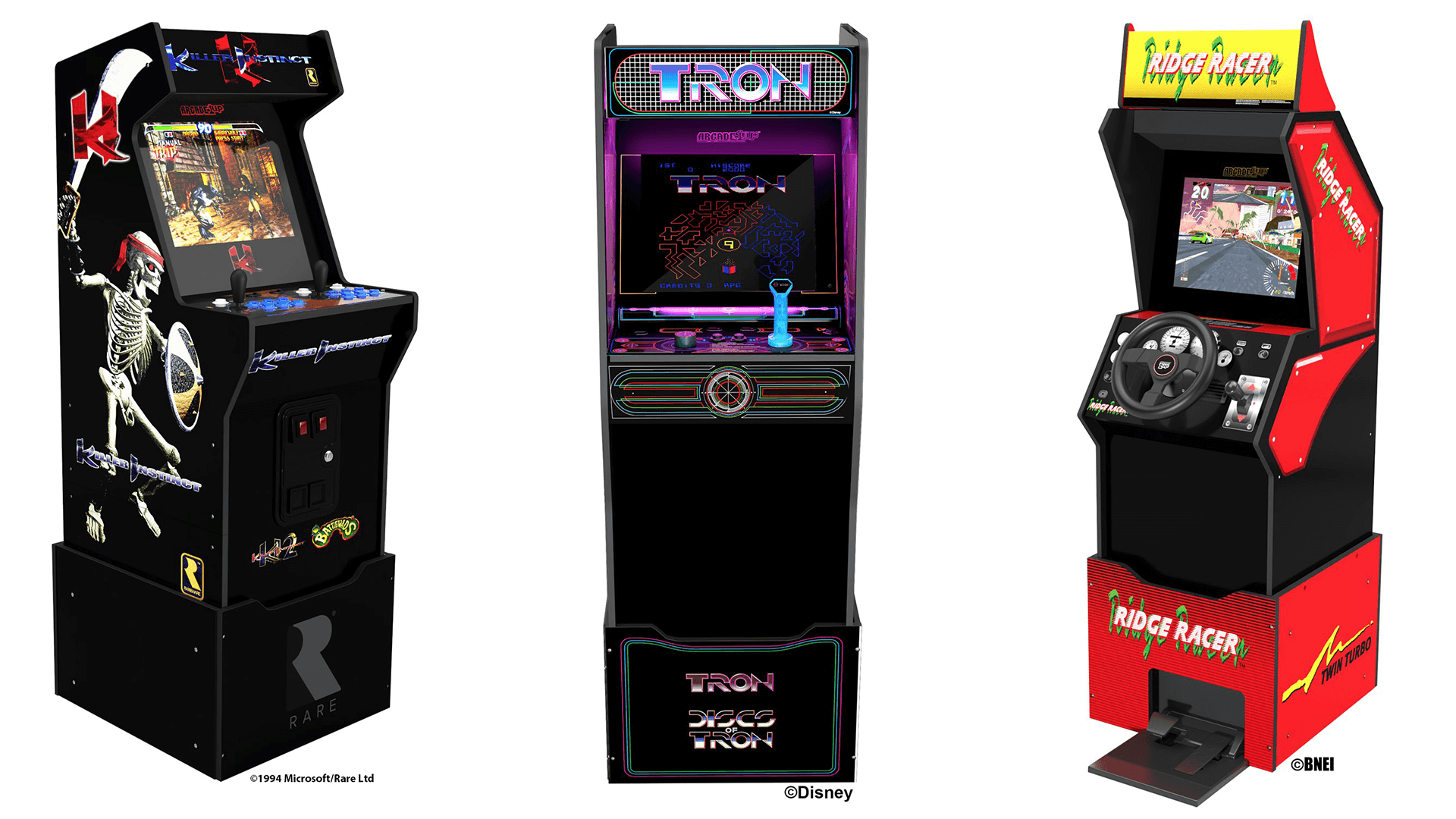 Even more nostalgic entertainment can be had on October 19, when ARCADE1UP launches the Tron cabinet. Loaded with the classic Tron arcade game, the cabinet is a faithful reproduction of the iconic unit of the 1980s. A light-up front panel, marquee, and flight stick help this cabinet stand out in any home arcade and recapture the essence of that old-school arcade experience.

All ARCADE1UP machines are WiFi-enabled, allowing users to connect to online leaderboards to share high scoring with like-minded arcade fans from all over the world.