October 27, 2020 — Mulan is one of the most famous Chinese heroines in history — and she has entered the spotlight once again. Disney’s latest adaptation released in March 2020 and largely stood as a remake of their earlier 1998 animated film (though with some major differences). Despite her status as a legendary figure, what greeted the heroine was not widespread admiration and applause in her home country, but instead controversy and criticism.

Mulan originates from a folk song composed in the Northern Wei Dynasty (386-535 CE), known as Ballad of Mulan. Even now, it is still found in Chinese high school textbooks, to be recited by generation after generation. Hence, for Chinese people, Mulan is iconic because of her long history in their culture, and not because of any film, as someone elsewhere might say. Whereas those in the West think of Mulan as an animated character, in China she is mostly depicted from Ballad of Mulan.

In spite of the mysticism commonly found in oriental tales from the time, Ballad of Mulan was written in a more realistic, grounded style. In this way, it had more in common with legends and poems found in the West, like Beowulf or Nibelungenlied. Stories concerning gods and spirits, like Journey to the West, The Legend of Deification, and Ghost Romance differ from Ballad of Mulan in this way.

Mulan’s story was simple —  when China recruited soldiers to fight against the enemies from the Eurasian steppe in the north, an ordinary girl joined the army in place of her father. She defeated her enemies and found honor, and finally returned to her hometown and restored her traditional female identity. No witches or phoenixes, like you would find in the latest film. Just one girl, who when the time called, fought alongside and equal to men in order to defend her homeland.

Disney’s original 1998 adaptation of this legendary tale presented a magnificent view of the ancient Chinese world and traditional Chinese beliefs. First and foremost, Chi (life energy, a force or aura known natively as Qi) fills Mulan with loyalty, brave, and honesty. In order to manifest her feminine characteristics in her daily life, and hide her identity in the army, Mulan has to suppress her strong Chi.

Chi, “mystery upon mystery” (as described in the 600s BCE text Tao Te Ching, by Tao Tzu), is common terminology in Qigong and Chinese Kung-fu, describing the circulation of energy inside the human body to transmit strength. From the perspective of ordinary people, Chi is like a mystical aura, and difficult to describe. In the film, to the ordinary non-native person, it is a more common perspective that Mulan is just restraining her talents and strength. The idea of Chi and any sort of life energy surrounding Mulan and being part of this is less considered outside of the film’s Chinese audience.

However, oriental mysticism is fundamental to Mulan’s tale, even if the average person may not see it. One example lies in the climax of the story, where the Chinese emperor wears a black crown, almost like the hats worn by the ancient Taoist priests. Many ancient emperors sought immortality from the Taoist alchemy, and it is likely this character would have followed suit. However, though he had mastered some martial arts, this was not enough; he was too weak and ultimately needed to be saved by our heroine, who possessed stronger Chi.

Most in the West are unfamiliar with the concept of Chi and other deep aspects of Chinese mythology. It makes sense, then, that much Western criticism of the 2020 remake lies elsewhere. Various controversies have surrounded it, like one of the stars’ comments on the Hong Kong protests, and the film’s erasure of the historical role of the Han Chinese. Mostly though, people just do not think it is particularly good. Even beforehand, this was to be expected concerning Disney’s recent remakes, like The Lion King, which was not received overly well. Many in the West were not expecting anything special from Mulan either.

In China, however, Mulan’s importance and ties to Chinese history and mythology make any remake of it arguably more important than the average movie. Whereas the 1998 original film was accurate to and conveyed much of traditional Chinese culture, the 2020 remake, however, does not accurately reflect it, and even depicts events that completely contradict it — something that is much more of an issue for Chinese audiences.

In ancient Chinese culture, a phoenix is a divine bird that stands for good luck and power; legend says the phoenix was capable of commanding all other birds. A famous Chinese Suona horn piece, “A Hundred Birds Paying Homage to the Phoenix”, symbolizes this. Later in time, the phoenix became the symbol of empresses, as the dragon is for emperors. Therefore, in accordance with Chinese culture, there is no chance a phoenix would guide a girl like Mulan since its mission was to lead the imperial concubines. Instead, the phoenix in 2020’s Mulan acts more like the bluebird. The bluebird appeared in both European and Chinese fairy tales and acted as a messenger, standing as a symbol for women who stood outside the roles prescribed for traditional women — this much better fits Mulan. Therefore, a bluebird should have been the symbol to accompany her in the film.

Also in the 2020 adaptation, a witch transforms into an eagle to help the Mongolian Rouran Khaganate, but she ultimately stands up to them and is killed by the Rouran tribe leader. The eagle is another significant symbol in Chinese culture; it is one of the ancestral figures of the Mongolians, who likely inherited it from Huns and Scythians (the eagle is used in many cultures, including ancient Rome and modern America.) It is still considered the totem and deity of the nomadic tribes in the Eurasian steppe — the tribe depicted would likely follow similar Shamanism as modern worshippers today. Those who have faith in Shamanism often worship the birds of prey, particularly the eagle and vulture. Priestesses and witches, being the spirit medium between the tribal people and their deceased ancestors, held supreme status amongst all Shamanist followers. So, it goes completely against Chinese culture and tradition that a Shamanist tribe leader would kill a witch following the same beliefs as them. Criticism from Chinese audiences towards 2020’s Mulan includes concerns about inaccuracies in Chinese mythology and history like this.

Early in the film, Mulan is shown to have grown up in an area where dozens of circular households are found. In addition to the round buildings, there are square ones – all of these are known as tulou, or “earthen buildings”. Chinese history tells how tulou were established by the Hakka people, who were avoiding war in Central China near the end of the Tang Dynasty (618 – 906 CE); dynasty meaning ruling regime or time period (depending on specific usage).

It is impossible that Mulan could have lived in a tulou like these. The aforementioned war broke out between the North Wei Dynasty and the Rouran Khaganate. This time period, throughout which China was extremely divided, is known as the Northern and Southern dynasties (386-589 CE). This was followed by the Sui dynasty (581-618 CE), during which China was united, and then the Tang Dynasty. The North Wei, where Mulan is from, contained the southernmost territory in the Jiangsu Province, while the tulou were in reality located far from the North Wei. Rather, they were found in what is now Fujian and Guangdong, near the south-eastern coast of China, which at the time belonged to the Northern Qi Dynasty (550-577 CE). The architecture of Mulan’s home and the North Wei territory she is shown to live in do not match up.

Another oversight comes from the matchmaker scene. In China, kids near the beginning of their education learn simple antithetical couplets, found in textbooks like Enlightenment of Rhythm. Things like ‘cloud’ vs ‘rain’, ‘snow’ vs ‘wind’, and ‘sunset’ vs ‘clear sky’ etc. In essence, two opposite words are put in the same position in the upper and lower parts of a scroll — it is the basic standard for ancient poems and couplets. In this scene of the 2020 film, the upper and lower terms in the depicted scroll express the same meaning! This mistake is unbearable, considering how common and intrinsic couplets like this are throughout Chinese writings and society — like how people often create their own couplets during the Spring Festival. In addition, the makeup, armor, clothing, and swords in the movie show various styles from completely separate dynasties.

Disney’s Mulan is a typical fairy tale, not a Chinese folk story, and certainly not a historical documentary, so it did not need to be completely faithful to just one time period. That said, since Disney continues to pursue greater realism and more advanced technology through their films, one wonders what is holding back Disney from presenting legendary tales and historical events with greater accuracy. 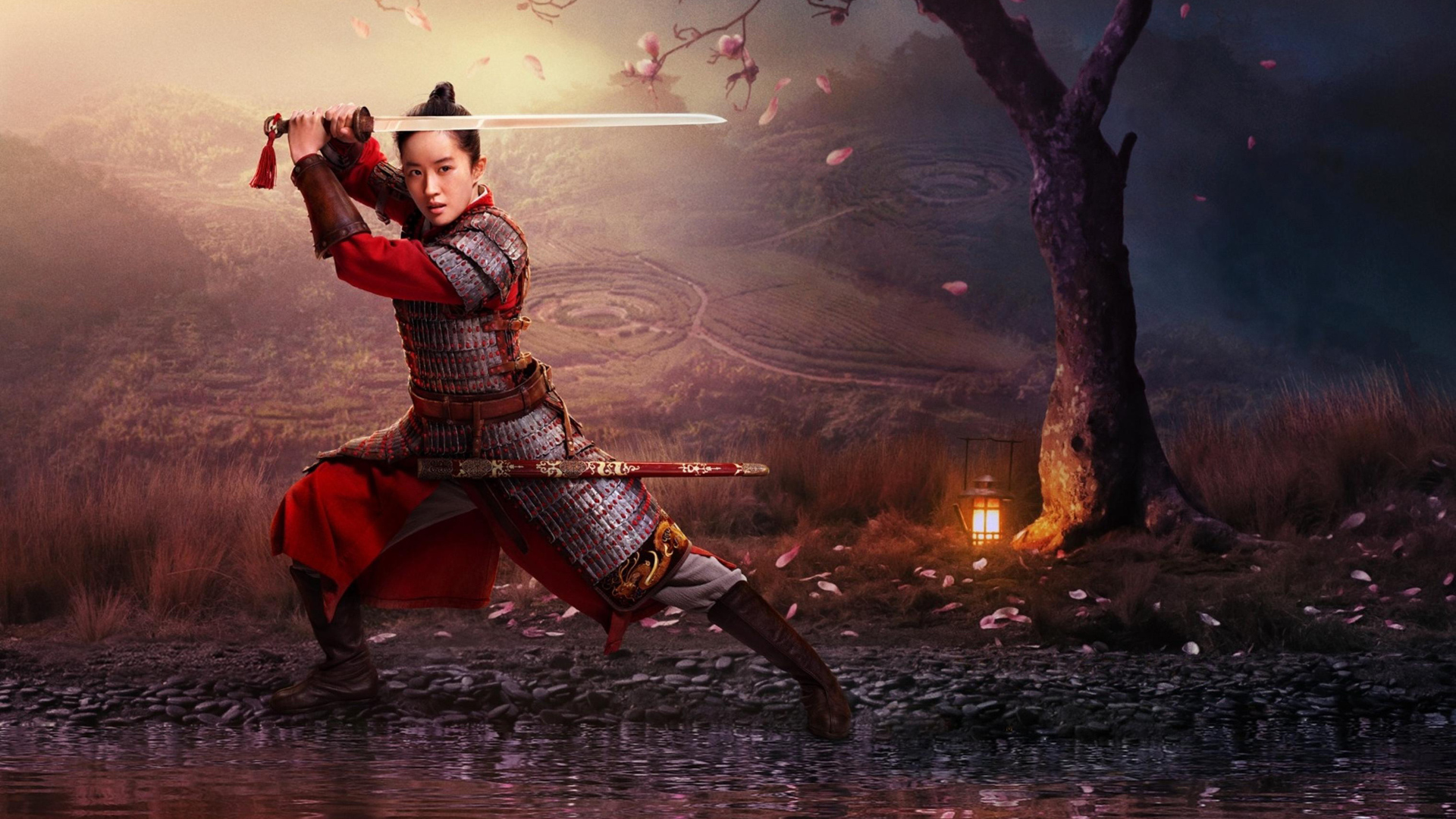