‘They Live’ is cheesy, questionably acted, before its time, and probably one of the best worst movies ever made.

Instead, this film is proof that even at his worst, John Carpenter creates art that grows only stronger and more charming with time.

Nada (Pro-Wrestler Rowdy Roddy Piper) plays a bad luck outcast looking for construction work. He lands a job at a new site and meets Frank (Keith David), who invites him to a local camp for homeless people where he is given a shower and a warm meal. A church right across the street sponsors the center, but Nada immediately becomes suspicious of the religious building. After some detective work, he discovers the church serves as the base of a resistance movement that believes aliens have taken over the earth. What at first sounds like a conspiracy theory becomes a little more probable when an army of police suddenly raids the church.

After the attack, Nada sneaks back into the church building where he, lo and behold, discovers a pair of sunglasses — the kind that changes his life forever — and also the lives of everyone who has come to love They Live over the years. In a painfully long scene, Nada realizes his newfound glasses allow him to see the reality as it is, beyond the made-up façade the aliens have created. Humans have been brainwashed and turned into herded, mindless cattle, subconsciously reprogrammed to breed and consume as they are hammered by messaging and commercials from a corrupt media run by none other than the aliens. The mind-bending realization that the world is not what it seems to sends Nada on a killing spree taking out every alien he encounters while spitting some of the best — and worst — dialogue ever written.

“I’m here to chew bubble gum and kick ass, and I’m all out of bubble gum.” — Nada, They Live 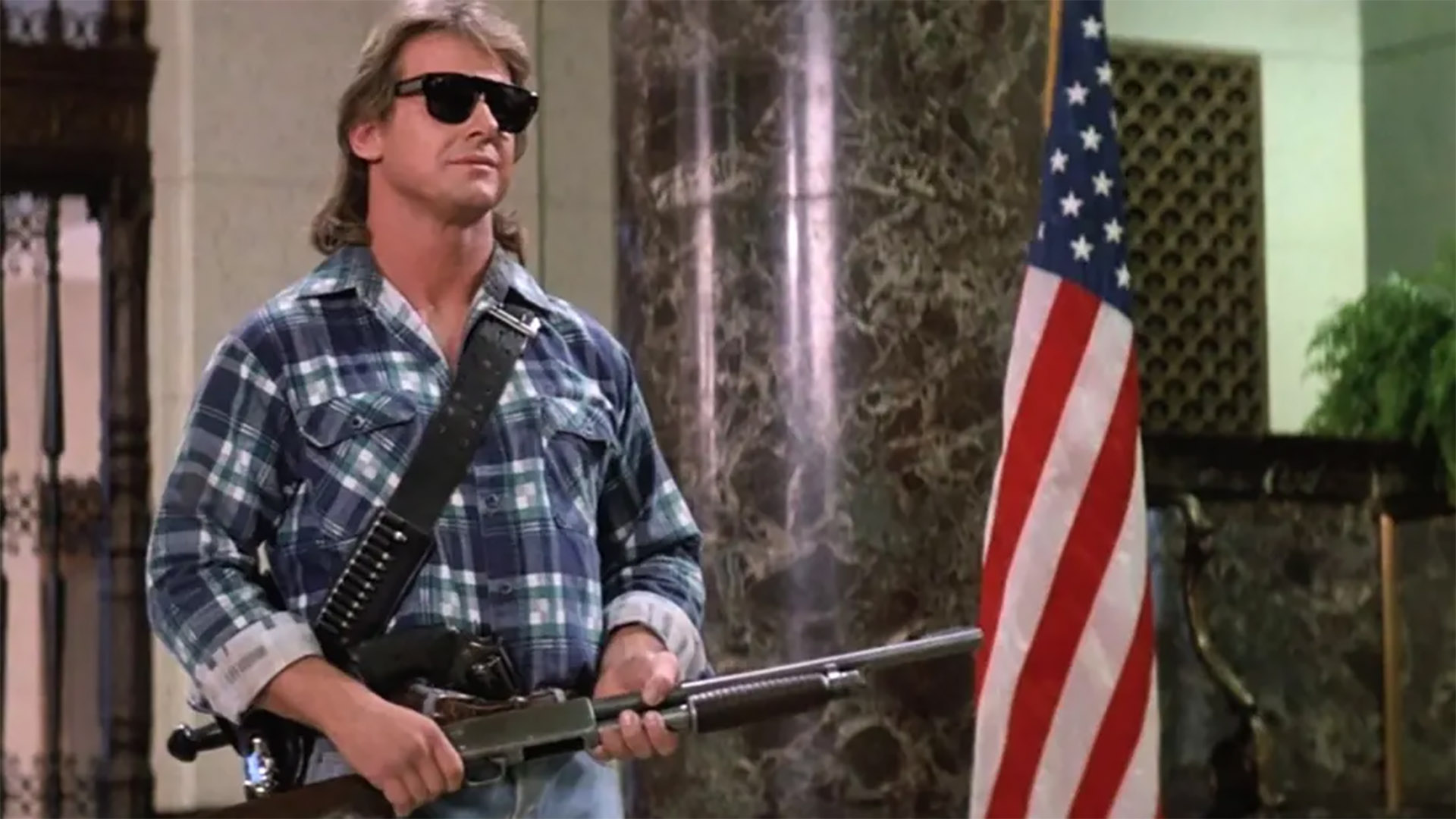 Roddy Piper may be a better wrestler than he was an actor, but it is hard to imagine anybody else taking on his role as Nada.

After a successful getaway, Nada hooks up with Frank once more, and the two hash out a couple of differences physically after which Nada convinces Frank the aliens are in fact real. The duo then breaks into the main TV station which they believe is the source of the mind-altering signals the aliens send out to control humanity. In a rare turn of events for an action movie, going after the alien headquarter turns out to be a suicide mission, however, the lonely hero still gets the last laugh by disabling the alien signal device which immediately opens up humanity to the truth, so they too can see the alien overlords who have not only been controlling them, but also live comfortably among them in everyday society.

It is difficult to criticize a John Carpenter project, and as already mentioned, They Live has grown on viewers over the years, but some negativity needs to be aired out. Some of the dialogue in this film is legendary, while other lines are downright awful. In Nada’s initial rampage, he exclaims, “I’m here to chew bubble gum and kick ass, and I’m all out of bubble gum.” A masterful line that some people still use without even knowing its origin. However, the very next line shouted at an alien is a cringing “mama don’t like tattletales.” Also, Roddy Piper’s acting effort as Nada, a role intended to be stoic, often comes off like he forgot half his lines but the crew just kept filming.

Now that we got all the bad stuff out of the way, let me tell you why this movie is great. First of all, it does not make use of a lot of special effects, except for its low-budget explosions. There is also one scene where the audience is introduced to the alien’s off-planet transportation device, which is entirely lame by today’s standards but was certainly a great fit back in 1988. The handcrafted special effect I love the most about this movie is the alien makeup which makes them appear like humans without skin, only with bug eyes and star-shaped pupils — an effective look that is so ingeniously simple it is more than a little surprising the approach has never been duplicated by others. 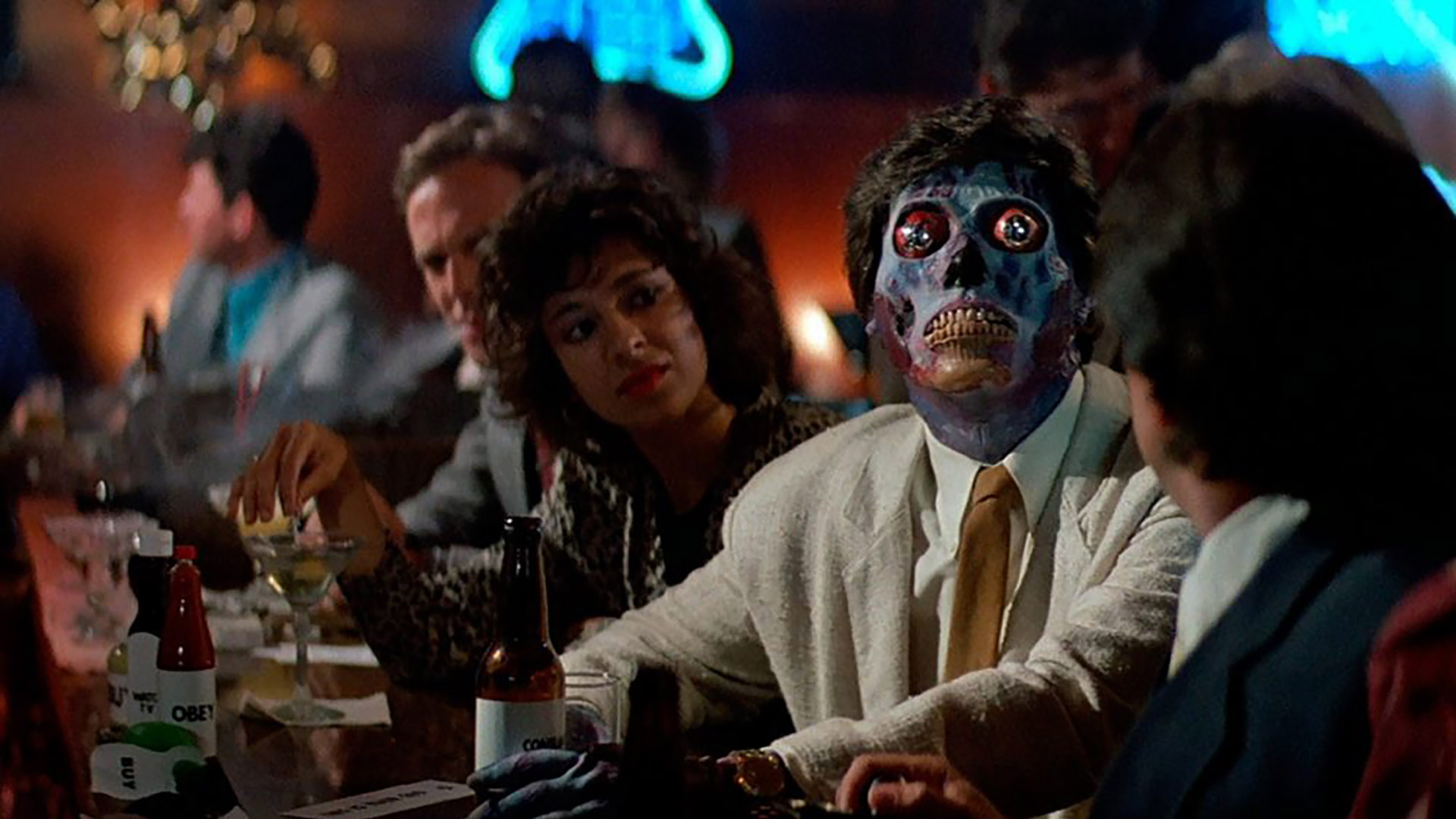 The aliens are given a make-up that is so ingeniously effective it is surprising the look has never been duplicated.

Fans of 80s movies will surely appreciate a few minor roles, like a couple of hobo-turned-alien sympathizers credited only as Drifter, played by Buck Flowers who is a character actor known for his distinctively graveling voice. Another sort of cameo is Holly, a double agent played by a young Meg Foster who can be picked out of a crowd by her intense blue eyes.

Of course, you cannot write of a John Carpenter movie without talking about its soundtrack. In true Carpenter tradition, he collaborated with Alan Howarth to create the movie score. Surprisingly, They Live is not your typical synth-driven Carpenter affair — instead, the film score can be described as a fusion of spaghetti western music instrumentation like harmonicas and maracas, with only a touch of modern (for the time) rock flair.

One of the most striking aspects of They Live is how it closely parallels some of the world’s most significant political arguments today. It is a biting commentary on the “haves” and the “have nots„ and racial justice, elements that have been the mainstay message of most Carpenter productions. Watching They Live after so many years was a great reminder of how art imitates life, and the more things change, the more they stay the same.

When it comes to cult status, They Live has definitely earned its title as a classic. While I am usually all for sequels and reboots, this movie is one better left untouched. If you have never had the pleasure of enjoying They Live, do yourself a favor and watch it at your earliest convenience. It is not unlikely that you too will become a fan too.