April 29, 2021 — Legendary super-pixeler Henk Nieborg’s retro-romp Battle Axe takes inspiration from arcade classics like Gauntlet and 1992’s The Chaos Engine, but perhaps even more so from Commodore 64’s Druid  — a long-forgotten top-down brawler that introduced co-op to early home computer user Nieborg is a legend amongst pixel artists, having single-handedly created all of the art for several classic titles like Psygnosis’ Lemmings-platformer The Adventures of Lomax for PlayStation 1. Working alongside equally established Manami Matsumae, a female piano composer who has created music for Mighty No. 9, Magic Sword, the first MegaMan title, and many more, can now add Battle Axe to her roster — the combined talent of Nieborg’s pixel art and Matsumae’s music is craftsmanship on steroids; the genuine retro vibe Battle Axe conveys is more grounded than most other games inspired by the past.

Battle Axe’s immediate title screen presents players with the choice of three warriors — Fae the Elf, Iolo the Druid, and Rooney the Marauder. After selection, retro fans will find themselves in the land of Mercia, in either single or co-op mode, to rescue captured locals who have been robbed away by the evil sorceress, Etheldred, and her army of (mostly undead) evildoers. Split over four refreshingly compact levels, blasting through Battle Axe with a friend takes less than an hour! Also, each player character has unique abilities — a weapon attack, a ranged projectile attack, and a special move.

“Nieborg has not held back on the pixels, and almost every enemy and foe killed explodes in a satisfyingly violent manner.”

Fae wields twin blades, flings deadly daggers from distance, and can zip in and around arenas at speed, whilst Iolo can teleport, fire off powerful blue energy balls, and use his longbeard for close-combat attacks. Rooney makes use of cannonballs for both melee encounters and ranged damage, and features a powerful dash that can wipe multiple enemies in a single charge.

On the surface, there seems to be plenty of diversity in players’ moves, although the moment-to-moment action can quickly become a bit repetitive. Regardless of whom of the trio of warriors Battle Axe is used, players are likely to rely almost exclusively on ranged attacks as they blast their way through Mercia and Etheldred’s hoards of golem-like creatures, goblins, and skeletons.

Pick-ups are plentily available as players traverse around levels, although the variation during gameplay is limited to a health potion, a bomb, and a spell that megablasts the player’s immediate area. Players also collect gems and coins which are used as resources to shop at Ælfwyn the Merchant who conveniently appears between stages. 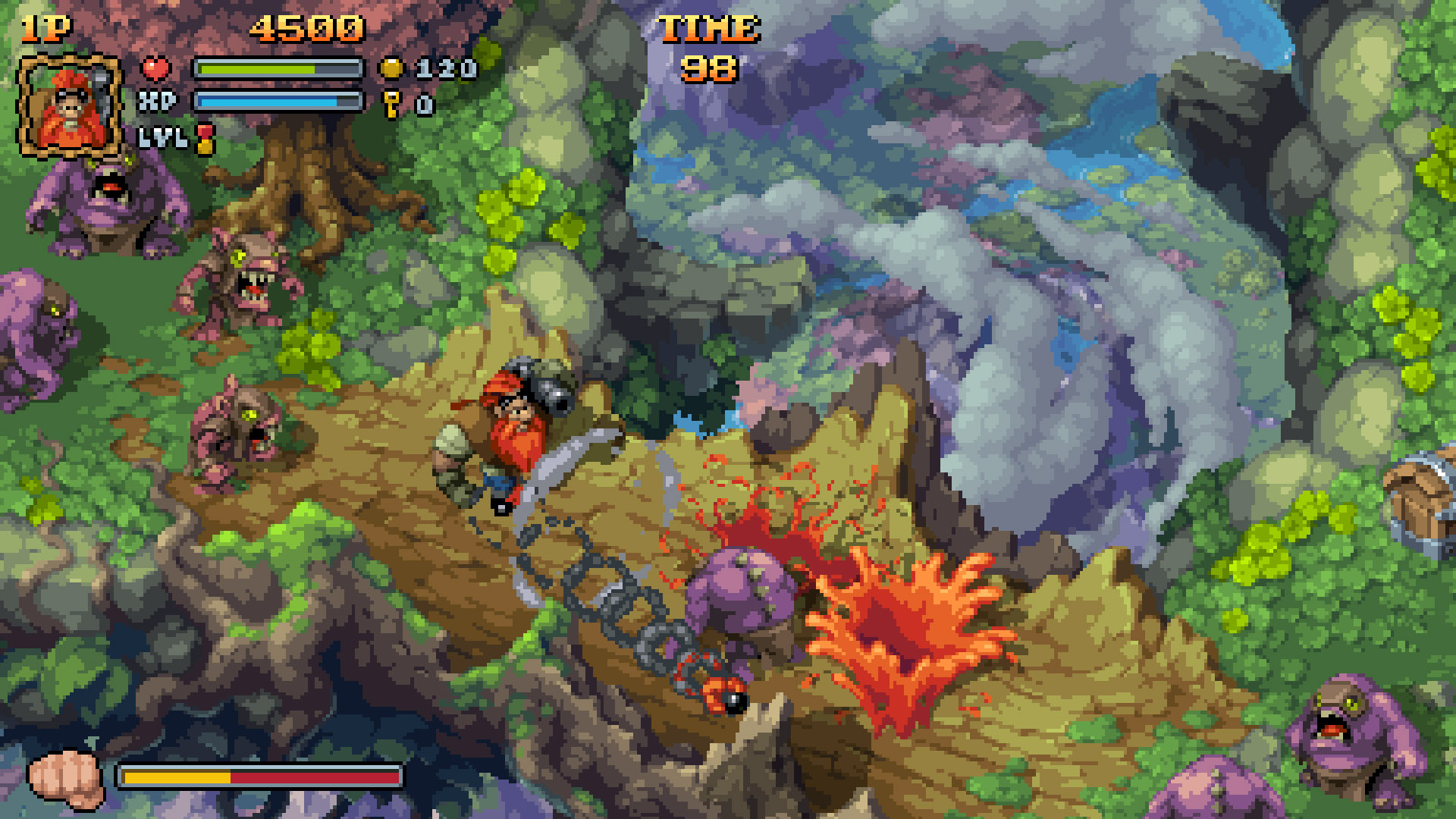 Battle Axe is a dense experience that is surprisingly tight. In this day and age, with a never-before-seen amount of all sorts of entertainment becoming available on a daily basis, we here at Yestermade believe short games are a good thing. That said, Battle Axe costs $29.99/€26.99 at the time of release, which puts it in the “overpriced” category since players can easily romp through the entire game 10 times a day, be it solo or with a friend (and having tons of fun whilst doing so!)

At the end of each stage, players of course encounter the video game trope of large bosses. They do their job well but are easy to read and predict, with obvious patterns that have an upside in the sense simplistic boss design ensure players not familiar with the difficulty of real arcade games can get through Battle Axe without too much effort, and get that satisfactory feeling of completion.

Battle Axe’s gameplay looks, feels, and oozes awesomeness by making use of rather large sprites. Nieborg has not held back on the pixels, and almost every enemy and foe killed explodes in a satisfyingly blook-like and violent manner. Also, player characters Fae the Elf, Iolo the Druid, or Rooney the Marauder are perfectly tuned to offer a decent sense of weight and robustness through the gorgeously detailed animations.

Battle Axe is a great-looking tribute to classic hack ’n slash games, including the repetitive action found in most arcade games of the 1980s. The music brilliantly empowers the game’s irresistible aesthetics to make the less-than-an-hour-long experience intense and satisfactory. There is little reason to go back and play the game again solo, but the unpredictable dynamics of playing with a buddy ensures Battle Axe will be fondly remembered by future generations.

Battle Axe is a gorgeously intense game developed by Henk Nieborg and UK-based Bitmap Bureau with Numskull Games taking on console publisher duties. The game is out now on Nintendo Switch, Steam, Xbox, and PlayStation. Battle Axe is a dense game in terms of content so we recommend waiting until its price drops before purchasing. 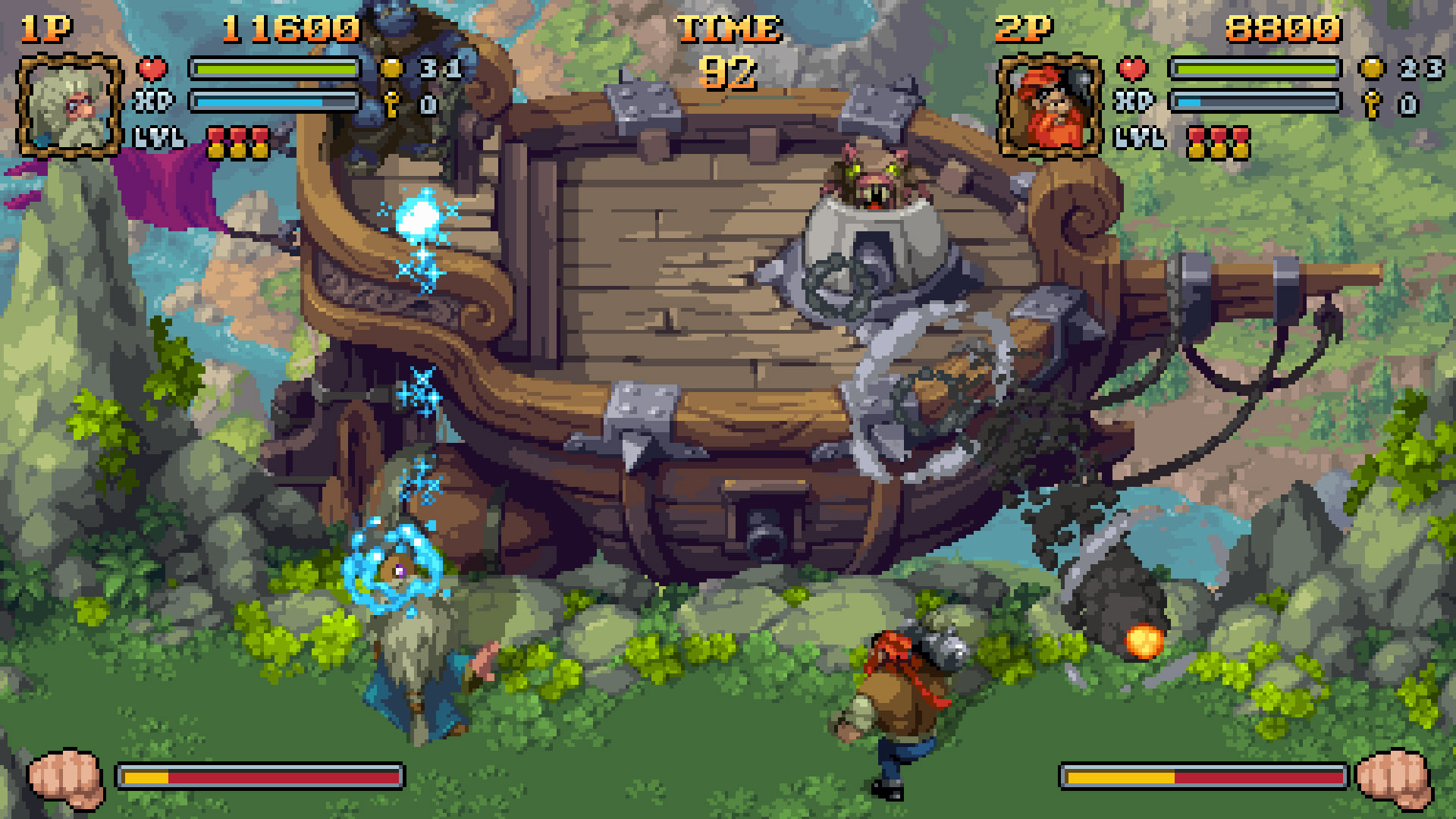 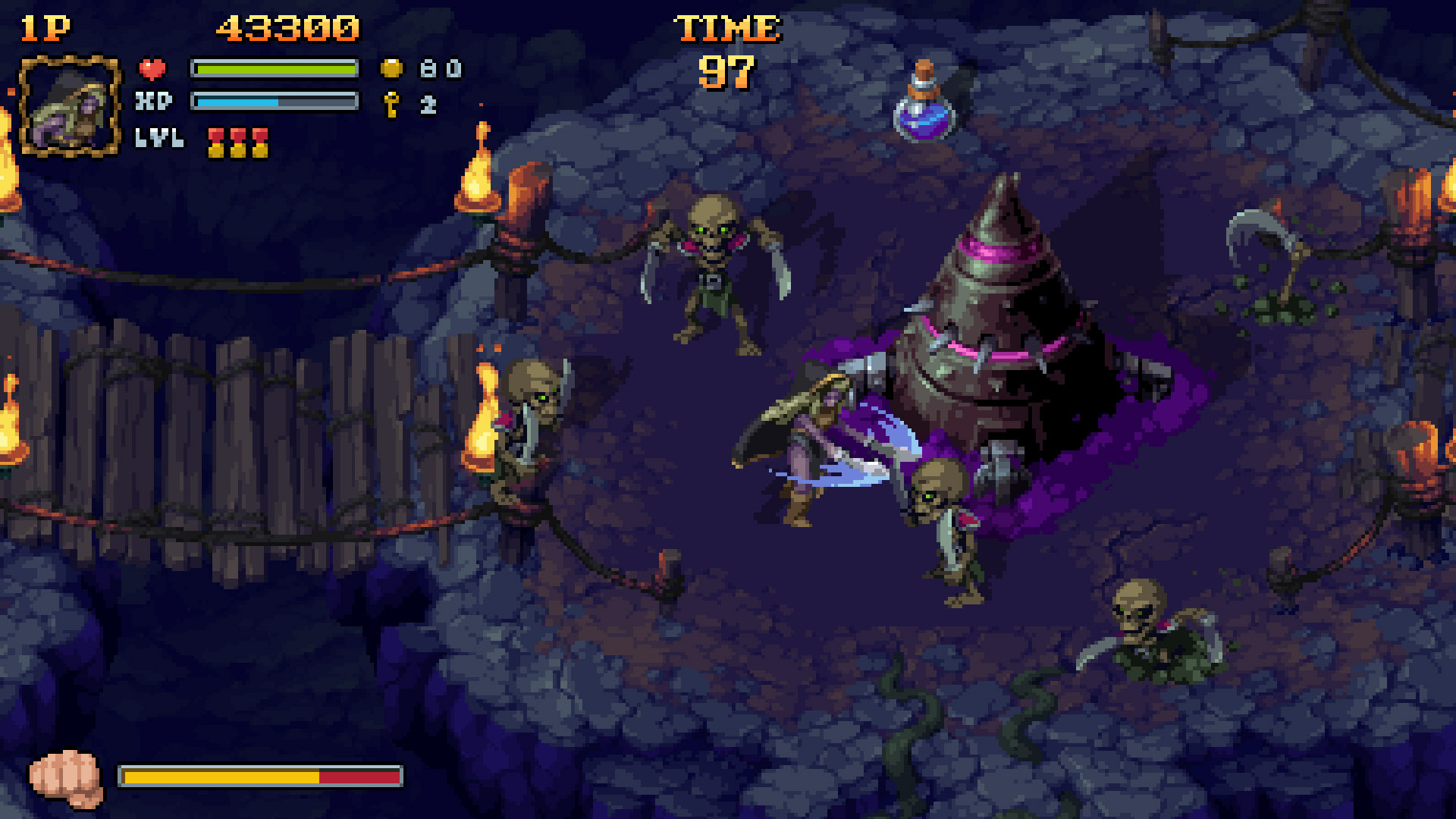 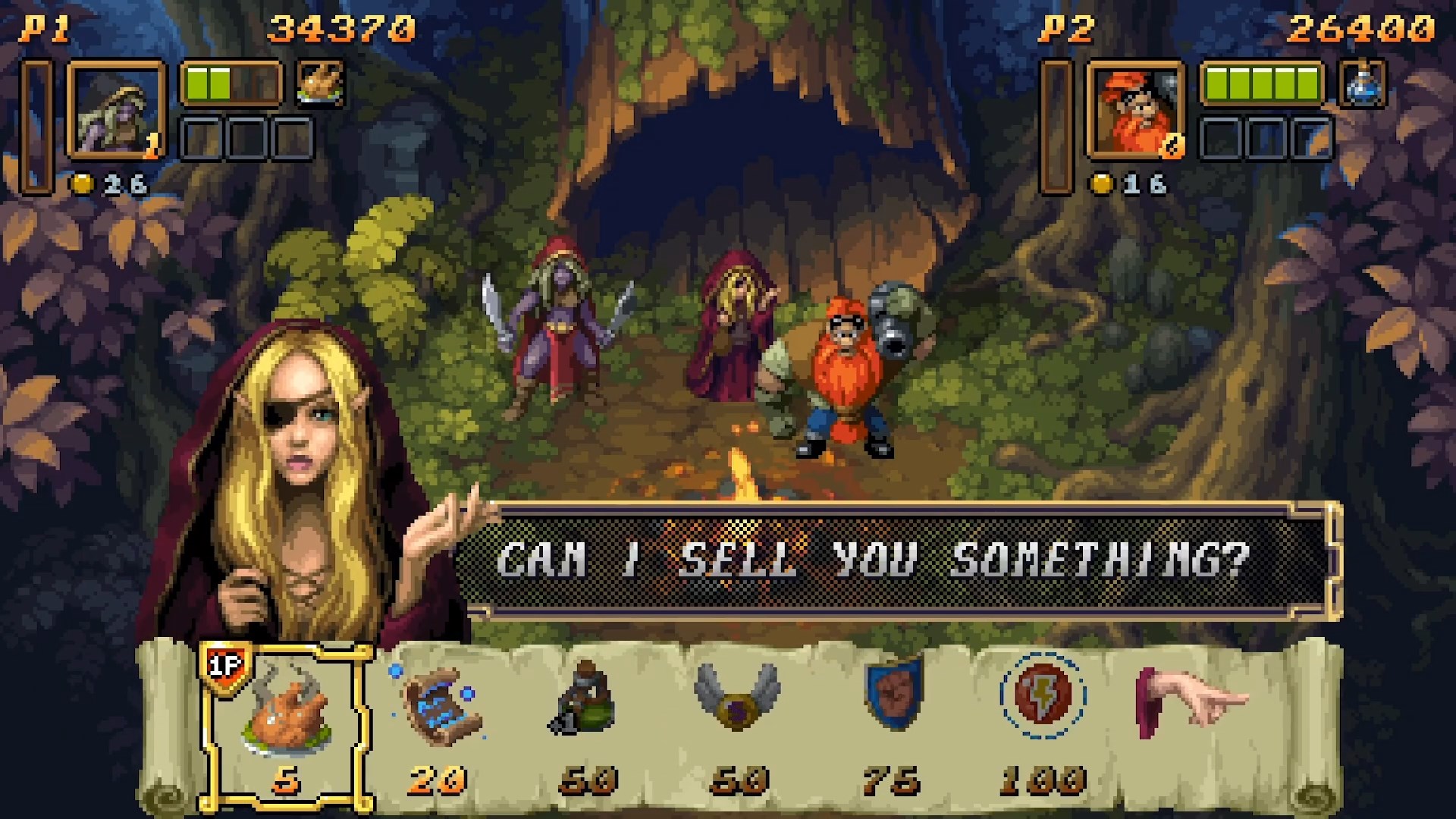 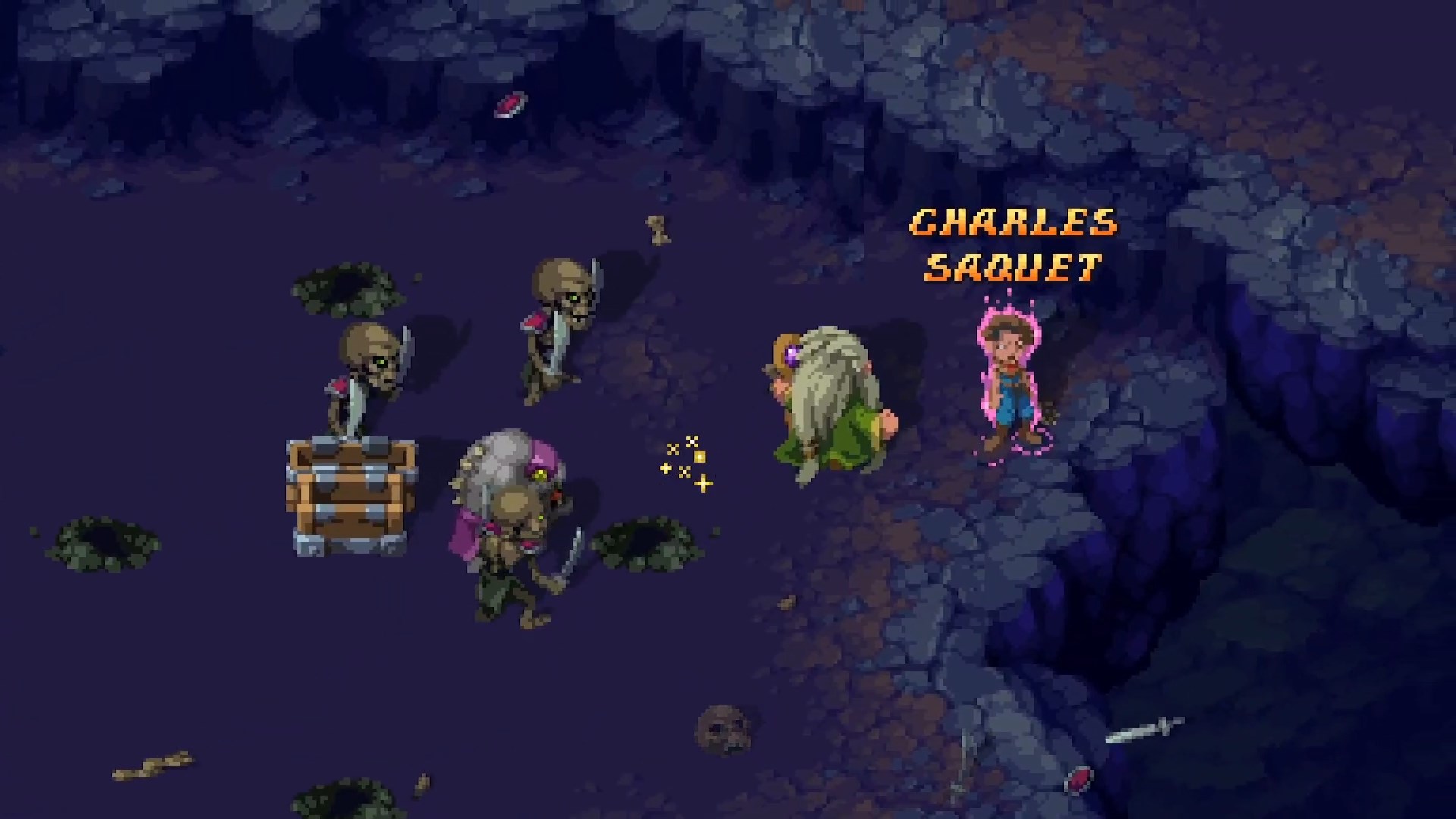 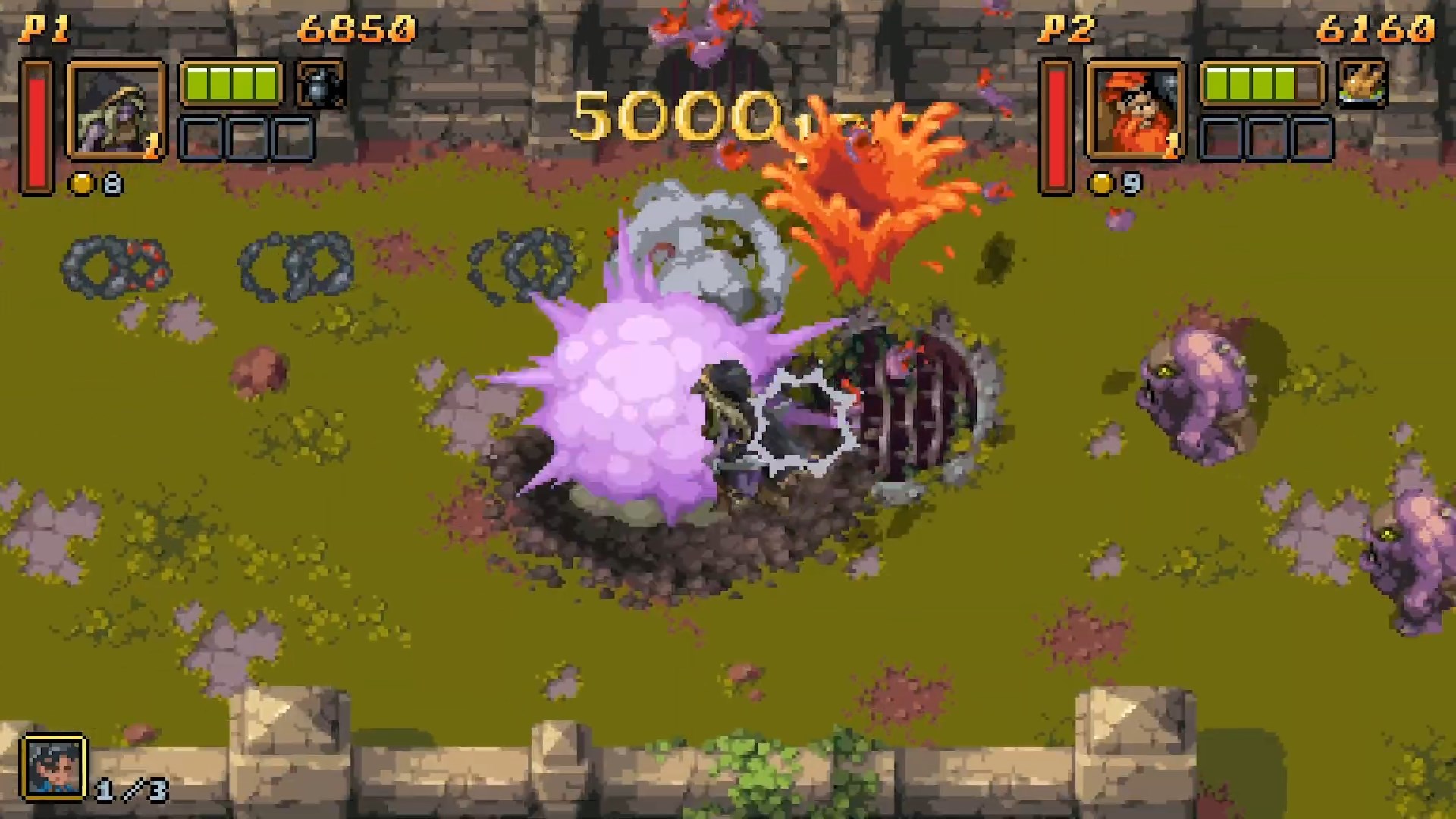 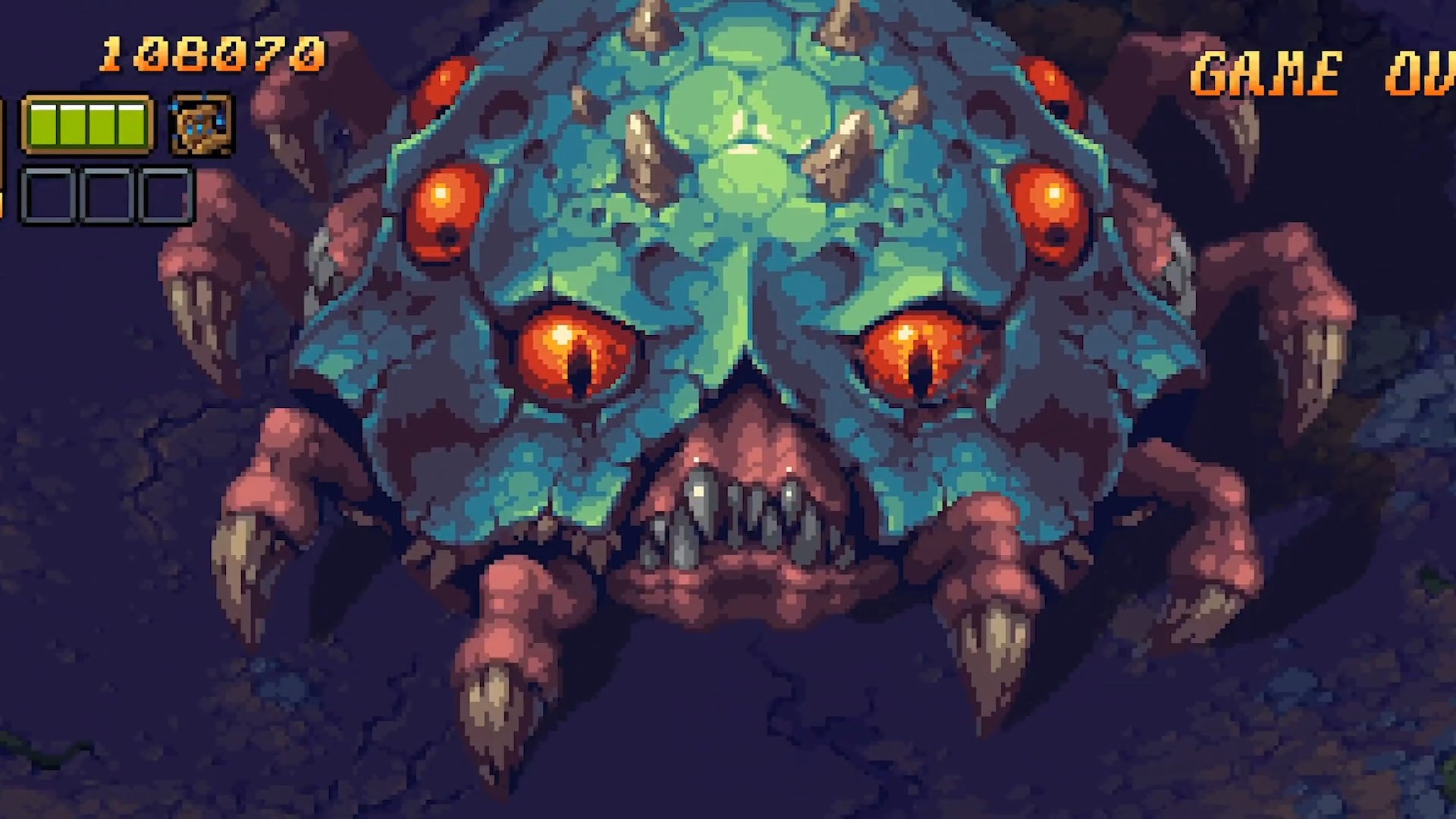 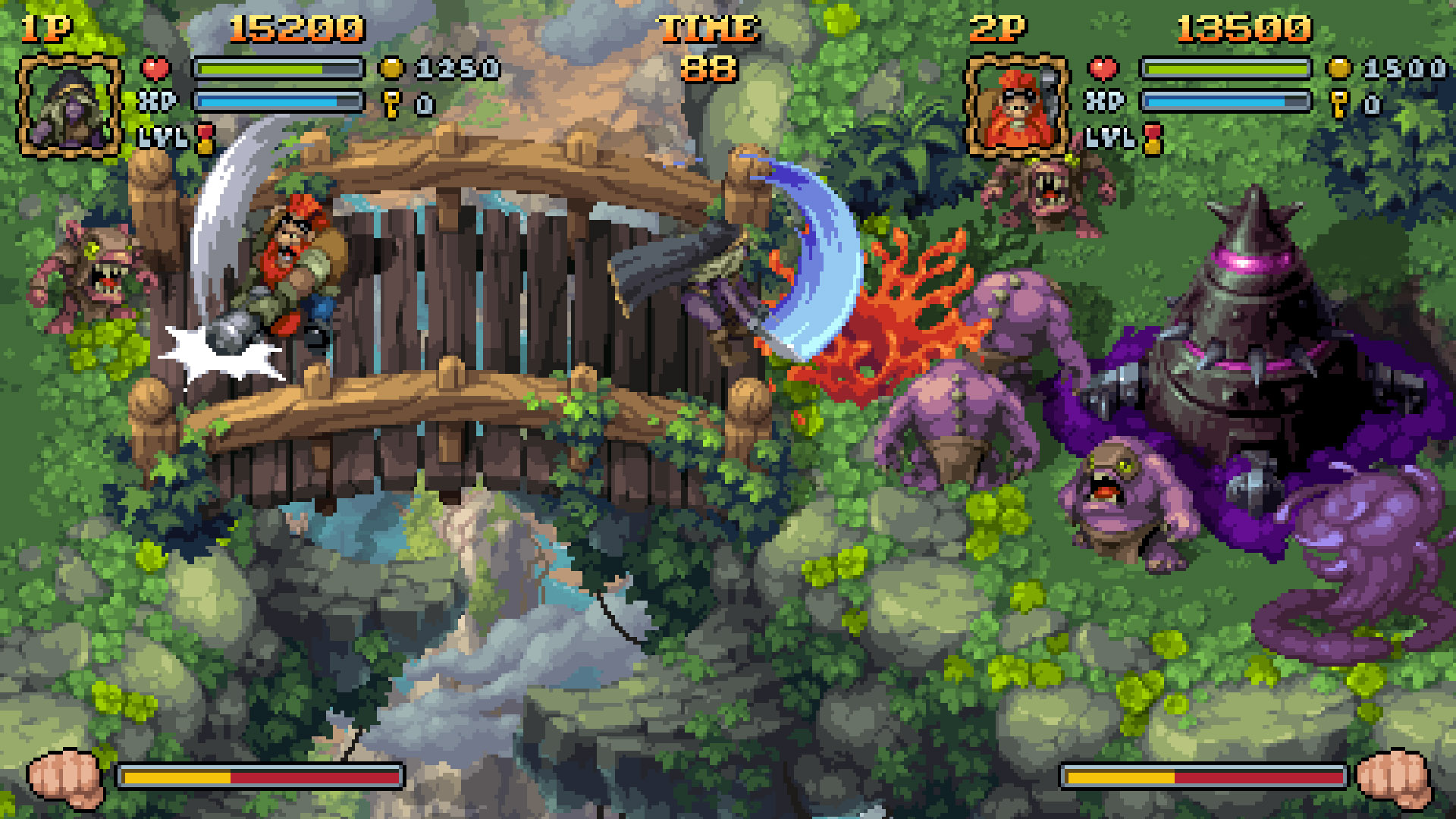 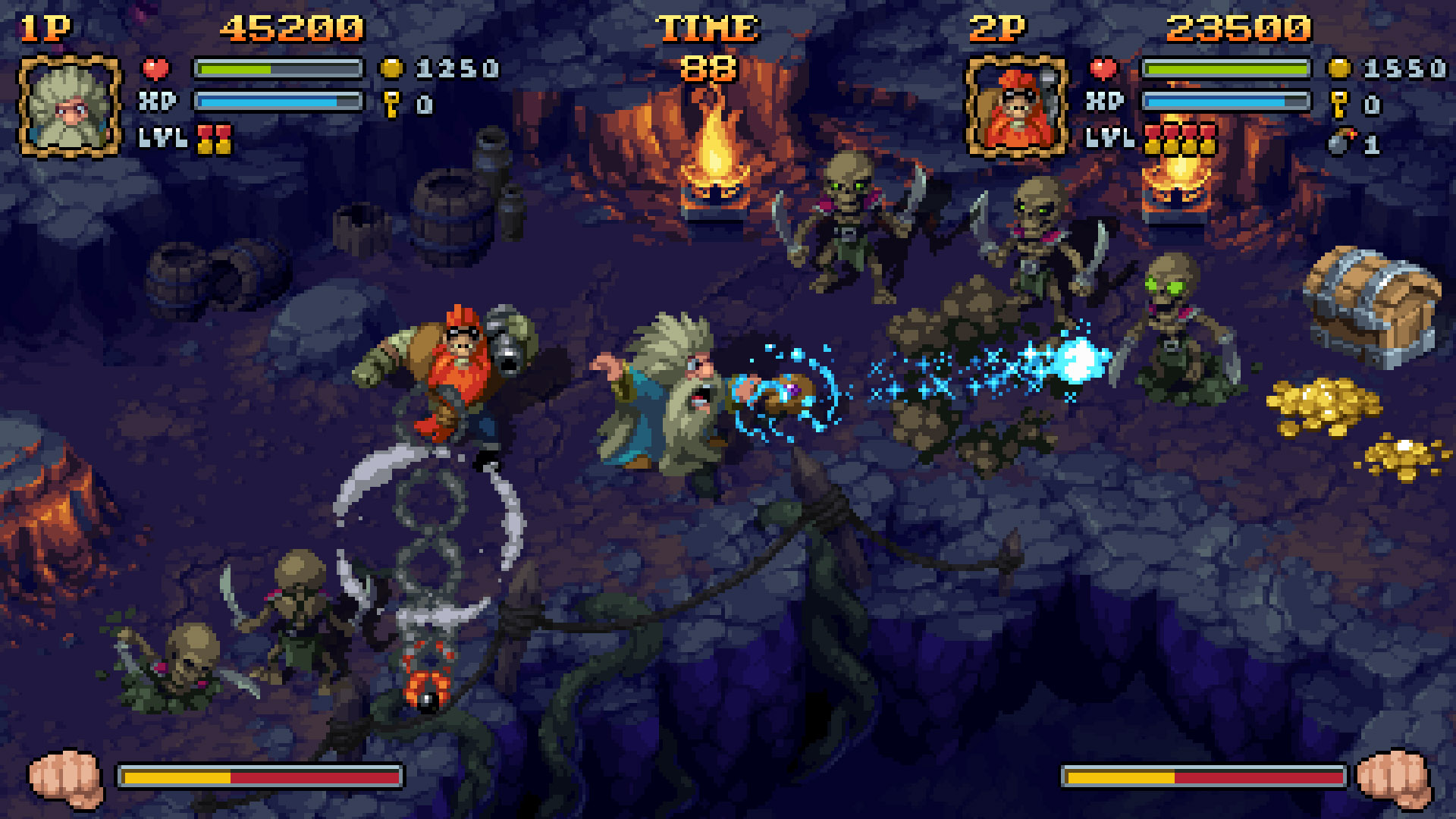