Console Port Review:
‘Within the Blade’

July 16, 2021 — Long before Ryu Hayabusa faced off against all matter of villainy in a 3D plane, he occupied a 2D space in one of the NES’ most beloved series. Ninja Gaiden was one of a few titles that lined my NES library as a young lad, giving me an early taste of engaging but often frustrating gameplay.

It has been so long since I’ve tried playing one of the retro Ninja Gaiden titles that I just assume I’d be just as bad now as I was then. Thanks to Ametist Studio, I can confirm without question that my assumptions were correct.

I am not going to outright peg Within the Blade as a Ninja Gaiden clone, but Ametist Studio was clearly influenced by Ryu’s earliest incarnations, whether they realize it or not. The thing is, that’s far from a bad thing. If it had emulated Atari’s E.T. travesty, this would be an entirely different discussion. However, this 2D side-scrolling adventure chose enjoyable source material while bringing some new things to the table to make it less of a Ninja Gaiden clone and more of an homage to the classic series.

“While I do not discourage difficult gameplay, sometimes a game feels like it is designed to be difficult just for the sake of falling within a relatively new video game mold. ‘Within the Blade’ is a little guilty of this, with attack animations that take much longer than they should to reset.”

Within the Blade was released on Steam back in 2017 (as Pixel Shinobi: Nine Demons of Mamoru), but the version I got my hands on was the recently released Switch port courtesy of the programming specialists at Spanish “platform conversion” studio Ratalaika Games. While I can’t speak to how differently the PC and console versions play and run, I do not really think that’s important. Sure, the PC version may play and look better, but this is the kind of compact retro game that the Switch was made for. It is so easy to jump into and what story is there about rival ninja clans and demonic influences plays out in panels reminiscent of — dare I say it? — old-school Ninja Gaiden.

I could talk a bit about the story, but it is really the weakest part of Within the Blade. The dialogue often feels shockingly out of place, using words and phrases that a 1500 AD Shinobi or his master would certainly not use. This is unfortunate as the text is sorely mismatched to the period, although the illustrations are well done and help ground the experience. 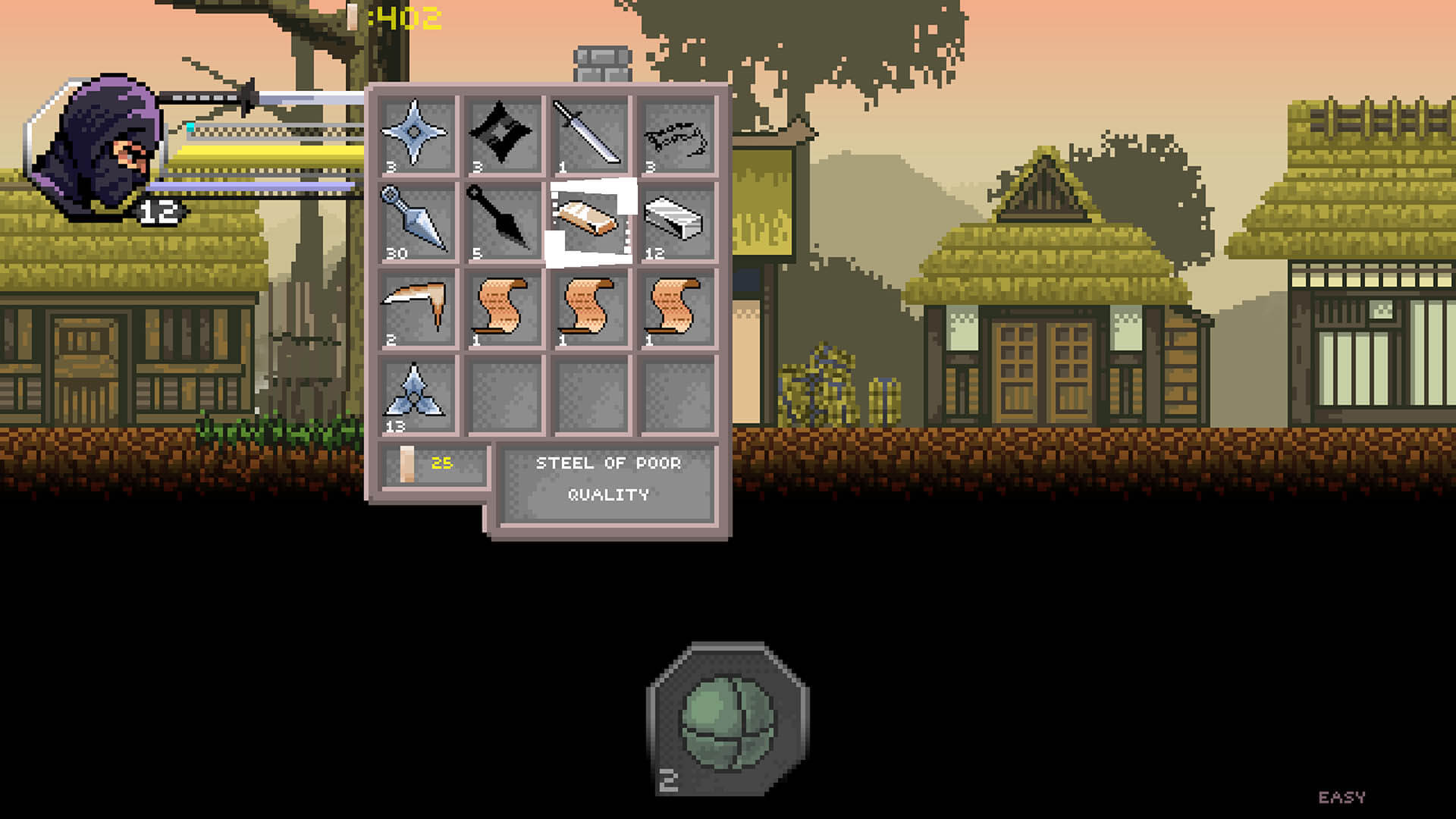 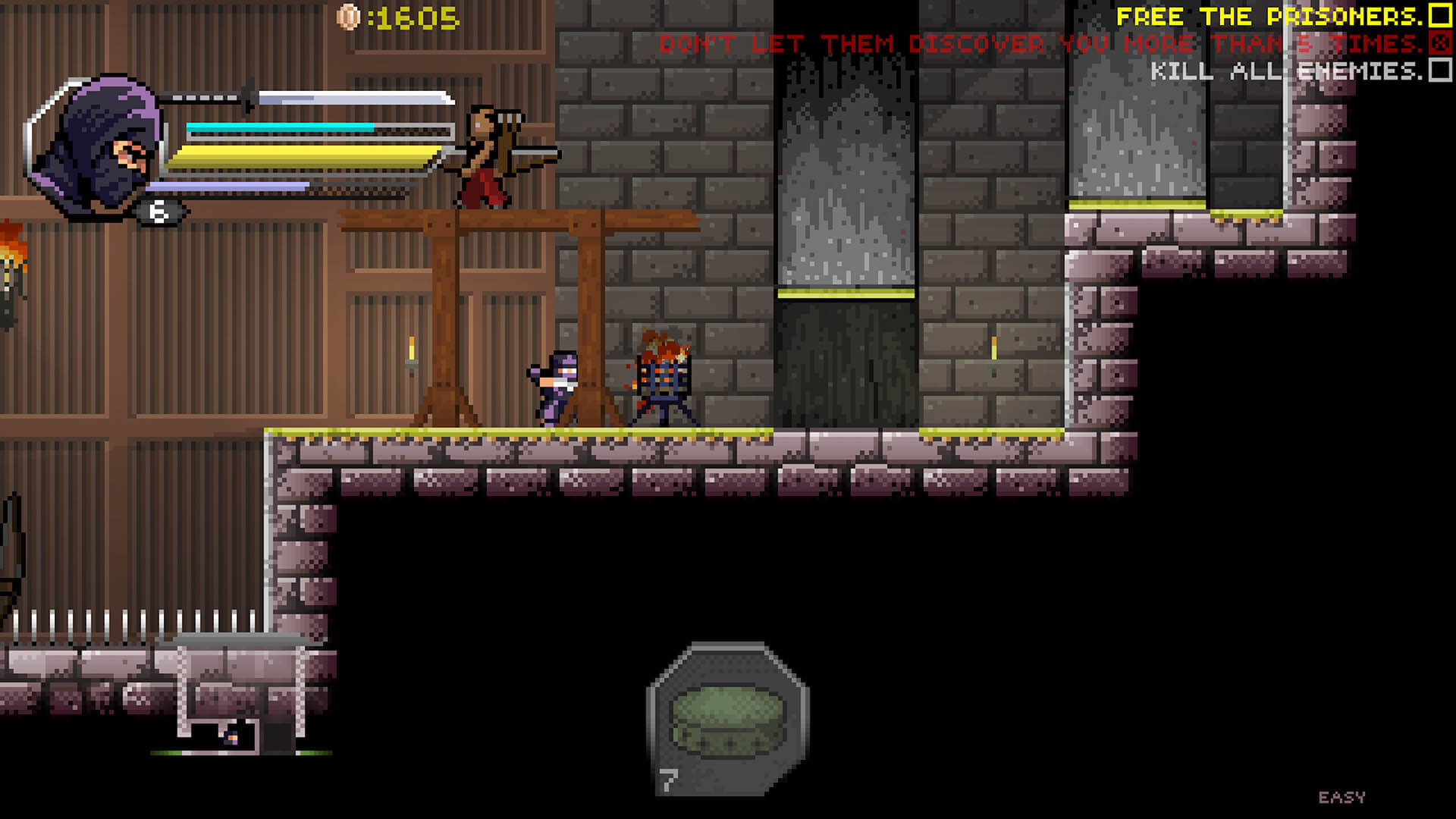 Visually, Within the Blade has quite a bit going for it. The pixelated world is straightforward and may not be winning any awards, but character and level design are effective and ensure the action on-screen is smooth and easy to follow. Some hazards may have been harder to spot at first, but they hardly break the experience.

Ametist also did a wonderful job with the audio design, with music that perfectly captures the period. There is not much to critique in terms of ambient and combat audio as it all fits well within their respective places. Could there have been more variety? Sure, but the grunts of battling ninjas and clang of connecting blades do their job more than well enough.

You start this stealthy side-scrolling adventure as a purple-clad Shiboni with a near fully shrouded face. Okay, kind of off on a bad foot in not comparing Within the Blade to Ninja Gaiden. However, almost immediately, we get a taste of how the game does walk its own path. To start, each level has a series of optional and mandatory missions to complete. Additionally, the whole “run ‘n sword” thing is not going to work. Not only can some enemies block or distance themselves from you quickly to nock an arrow, but the Shinobi’s attacks also aren’t fluid. You can string a few combos together, but otherwise, you will need to compensate for a considerable delay before you can land the next strike. Within the Blade stays true to its arcade roots as it demands players learn patterns of varied enemies and genre “stock hazards” that can end progress in an instant. 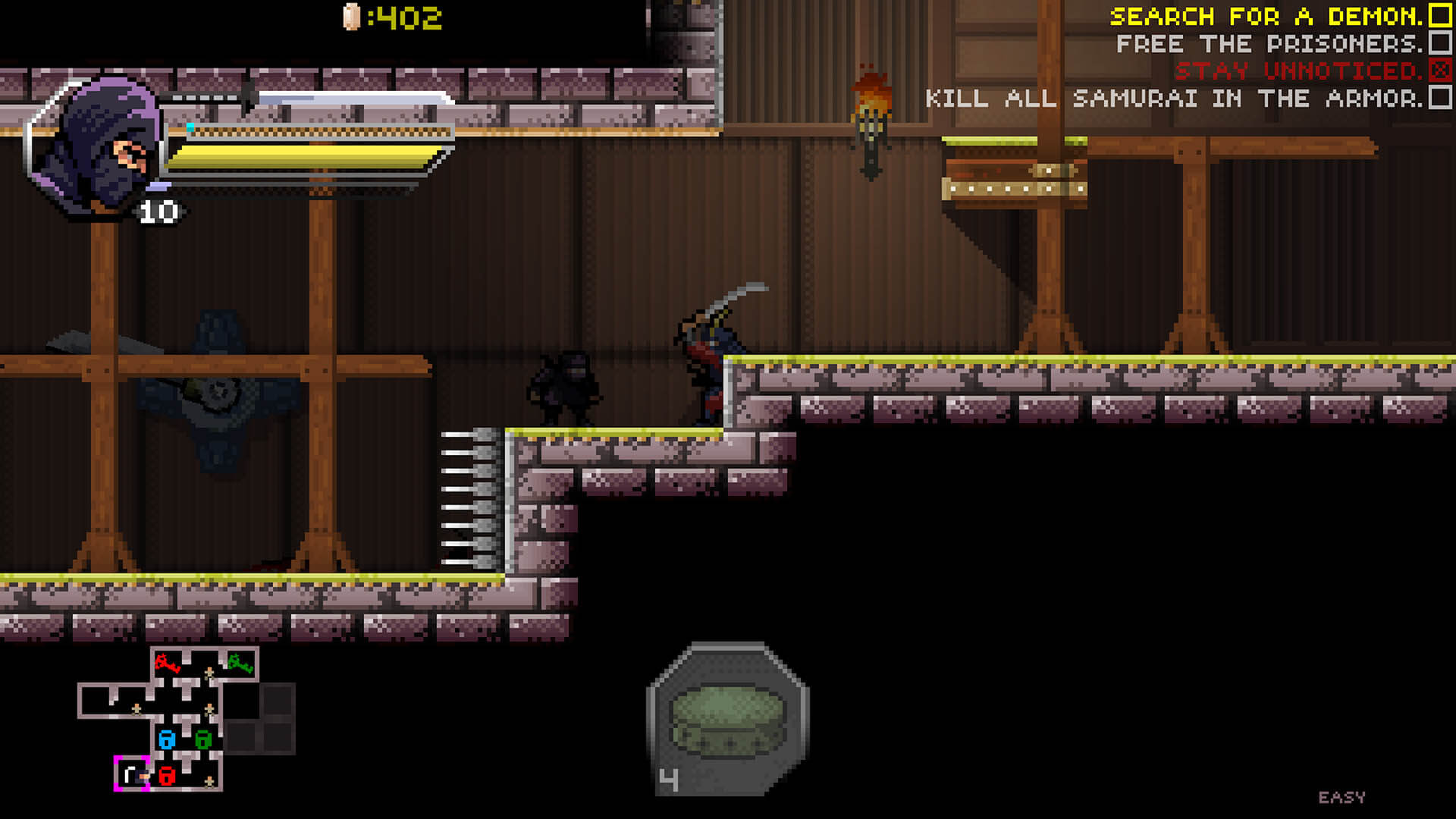 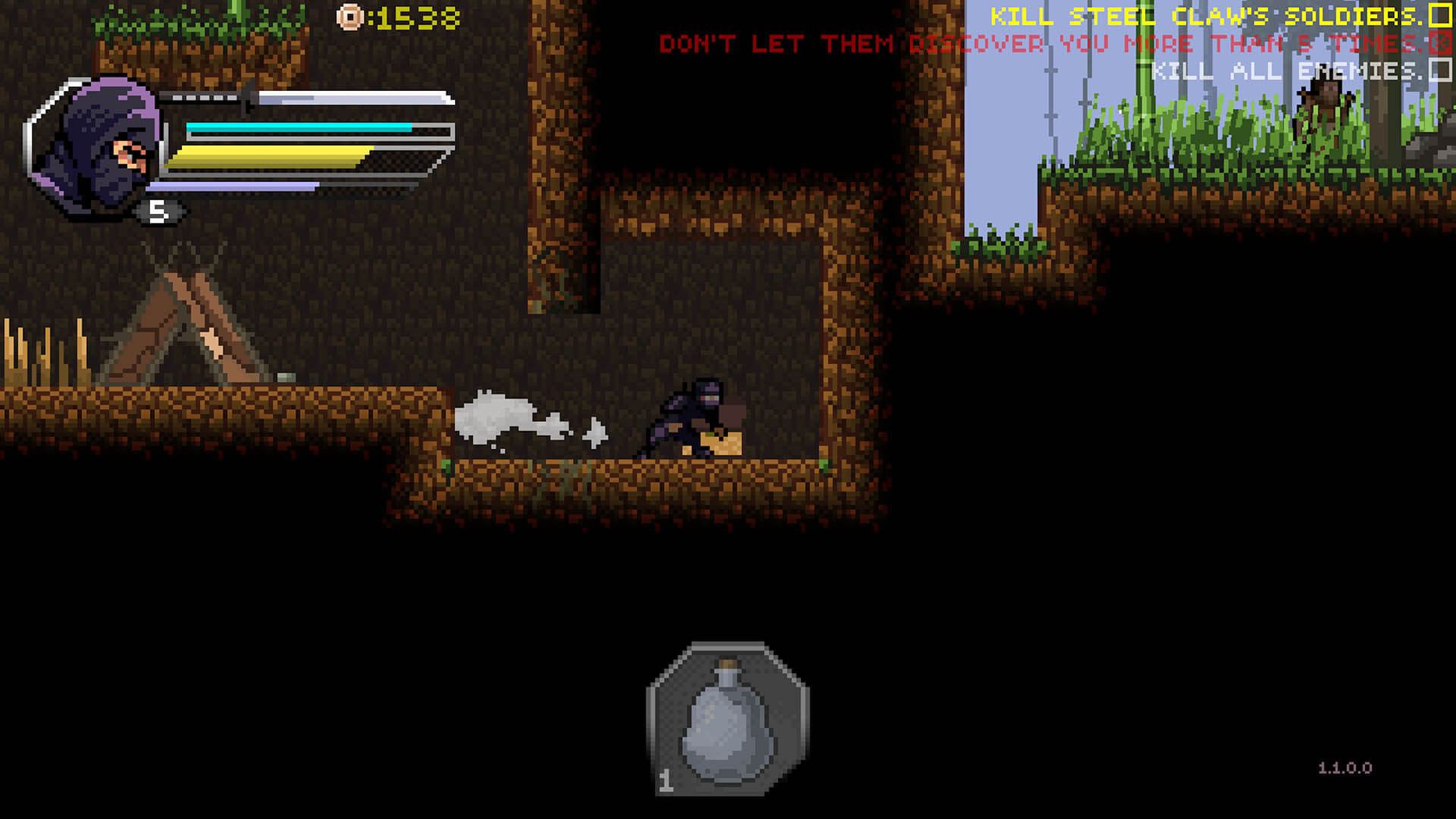 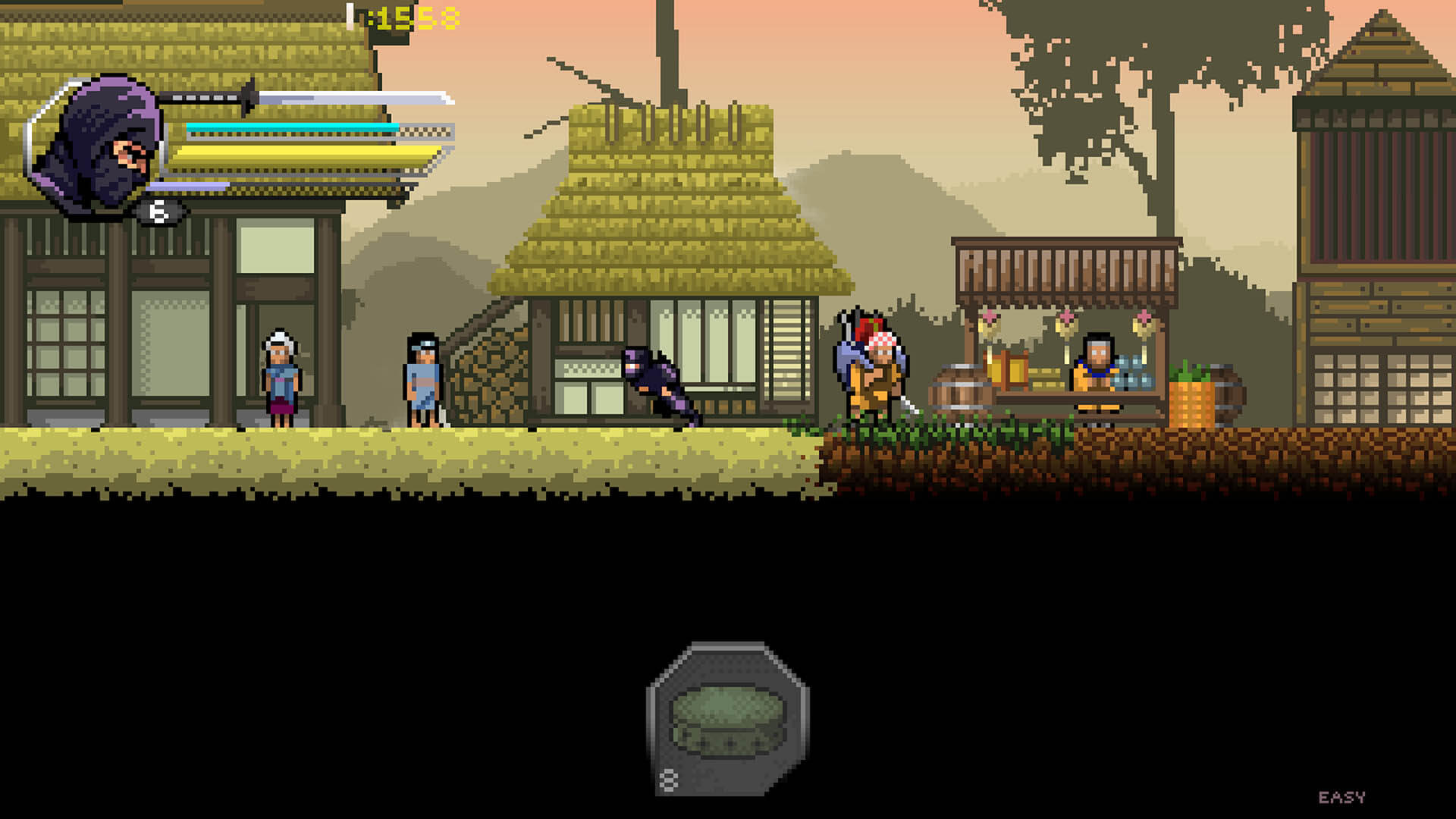 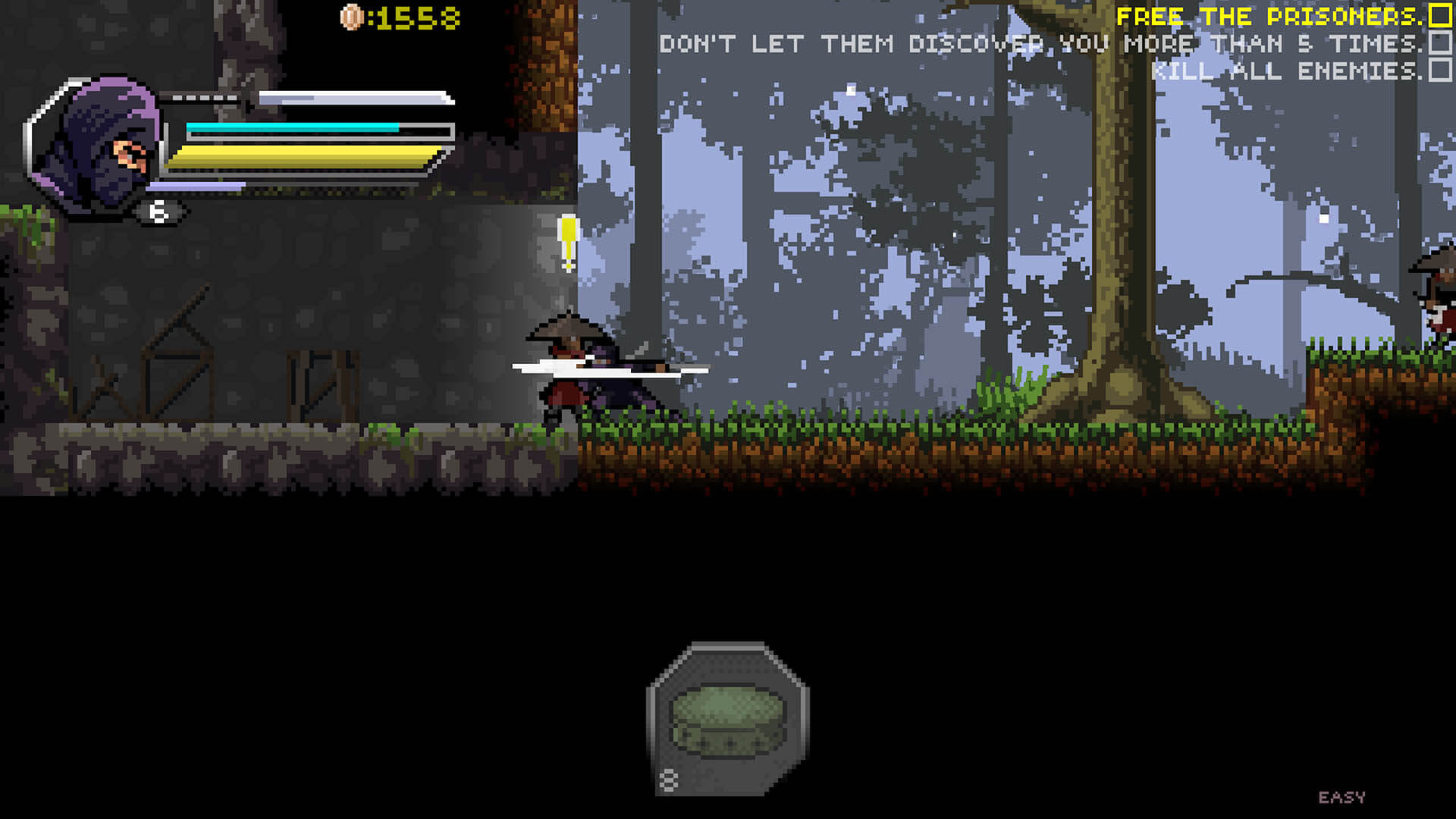 I bounced back and forth between loving and hating the combat, but it depended on whether I remembered that I could not mash the attack button. While I do not discourage difficult gameplay, sometimes a game feels like it is designed to be difficult just for the sake of falling within a relatively new video game mold. Within the Blade is a little guilty of this, with attack animations that take much longer than they should to reset. For a swift ninja that has no issue dashing across the level, the pause feels inorganic and forced just for the sake of the difficulty. It is not a considerable issue, as unlockable skills can increase the number of hits in a combo and other beneficial combat mechanics.

The biggest issue with landing more hits, however, is the melee weapons in Within the Blade are destructible. There is no shortage of weapons at your disposal, and you will need to familiarize yourself with the inventory of smoke bombs, explosives, swords, and more to understand which tools can take a beating before breaking and which are suitable for specific occasions. For instance, you will find certain enemies are too quick for your standard sword or that to snag a stealth kill, you must have a sword equipped. And trust me, you want to snag those stealth kills! Not only could you have a level objective that requires you to stick to the shadows, but it is also easy to get overrun by enemies if you’re not careful.

Thankfully for the Shinobi, if he does get cornered without a proper weapon, he may have an ability that could get him out of a bind. The abilities range from unlocking a stealth assassination to increasing the hero’s maximum health. Within the Blade could have been a relatively standard side-scrolling hack ‘n slash, but Ametist Studio wanted to expand the experience with elements that navigate into role-playing territory.

I did run into some issues when it came to the Crafting, Inventory, and Shop menus. I am not sure if it’s a glitch or an oversight, but none of them had a cursor, and, in some instances, the item avatars weren’t showing. Sadly, I could not take full advantage of these mechanics, but I could glean at the potential depth, especially with crafting and can appreciate what Ametist was working towards.

Overall, Within the Blade’s Switch port is a successful one. To reiterate, I have had no time with the Steam version. Beyond the glitched menus, subpar narrative design, and often-forced difficulty spikes, I found myself enjoying my time as the unnamed Shinobi. Touches of RPG mechanics and the assortment of weapons and tools add on to already solid gameplay. It is a solid experience I am happy to take with me everywhere I go — especially so I can tackle the various Challenge scenarios that test your abilities and patience. 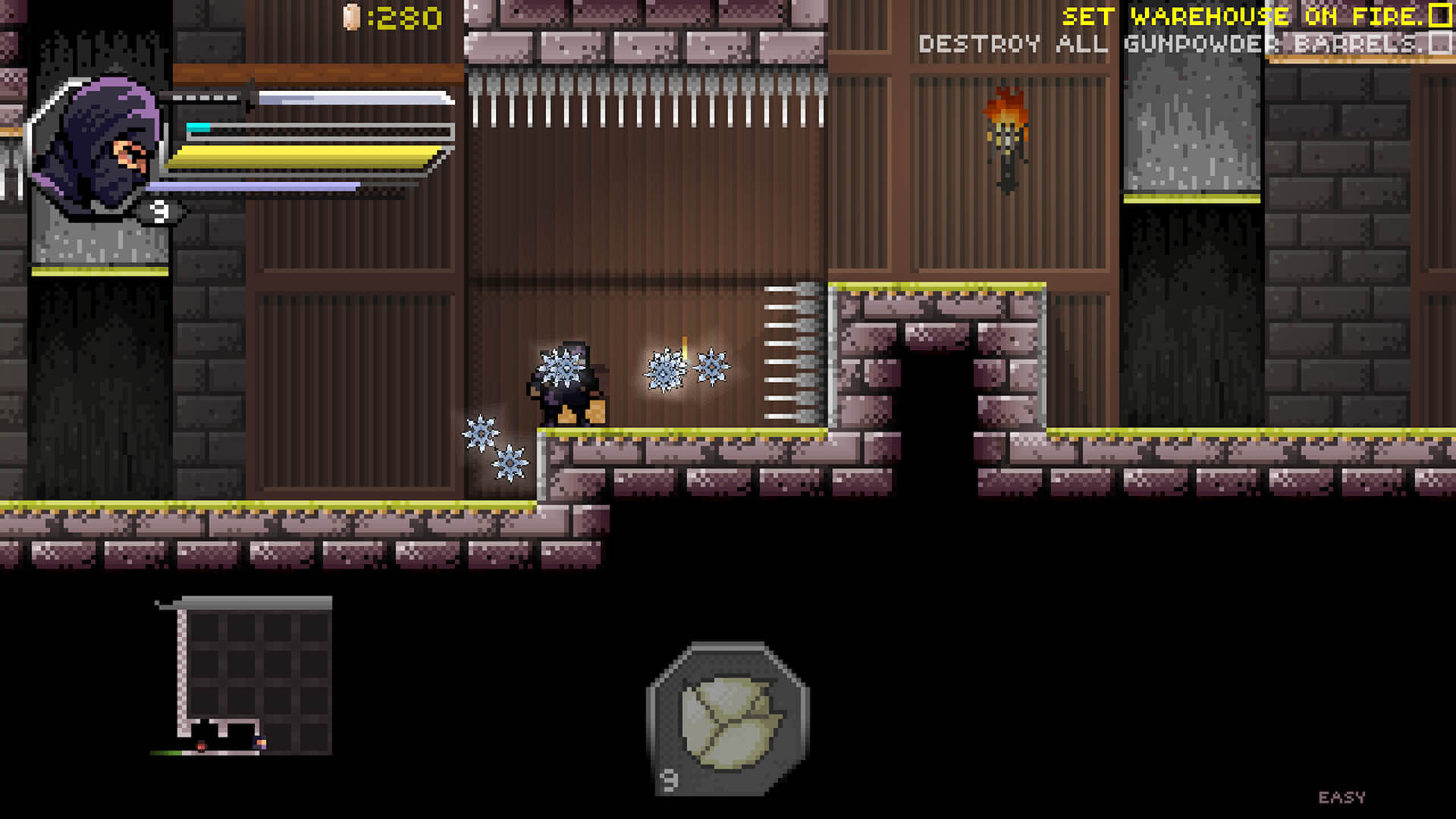 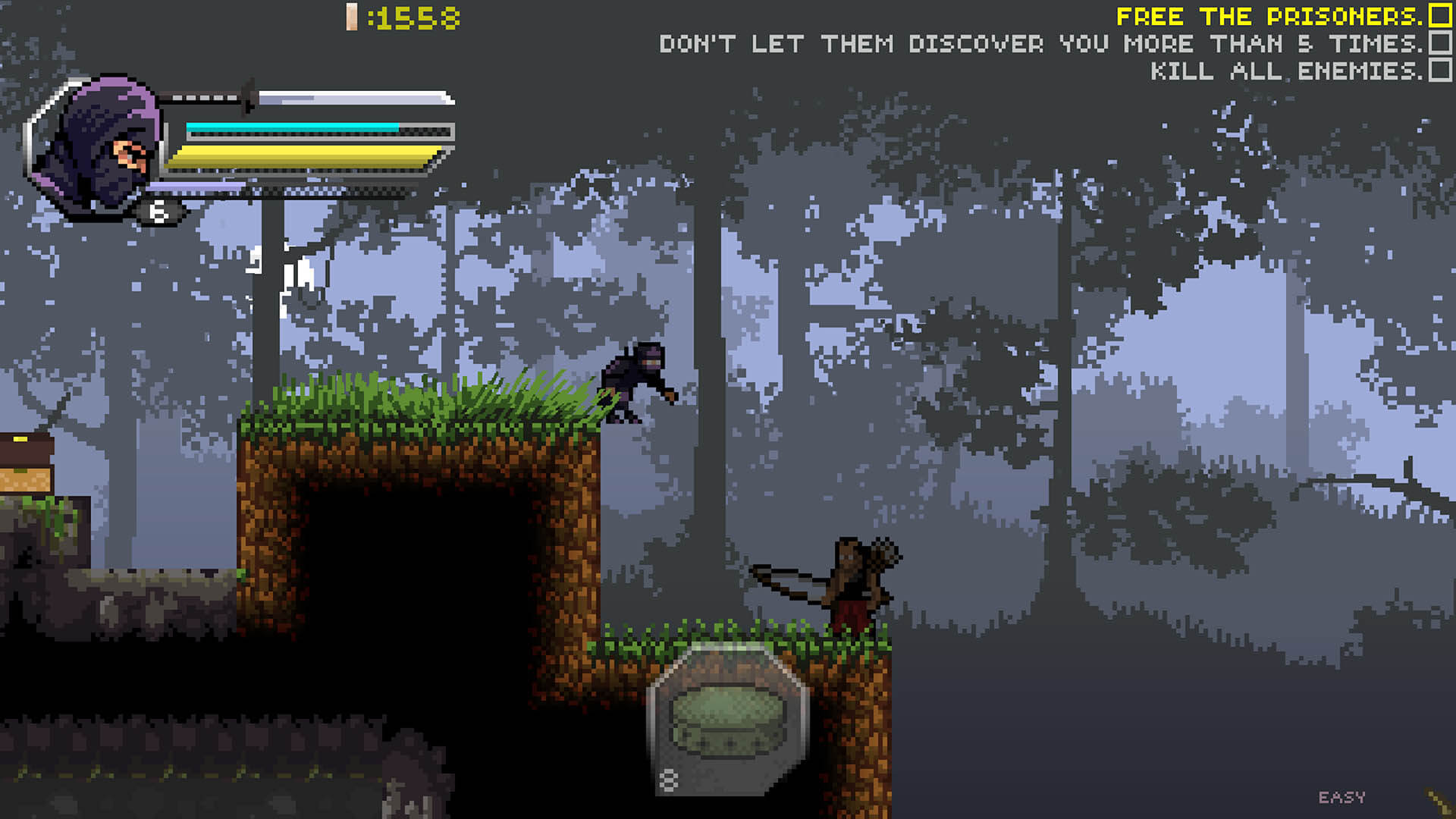 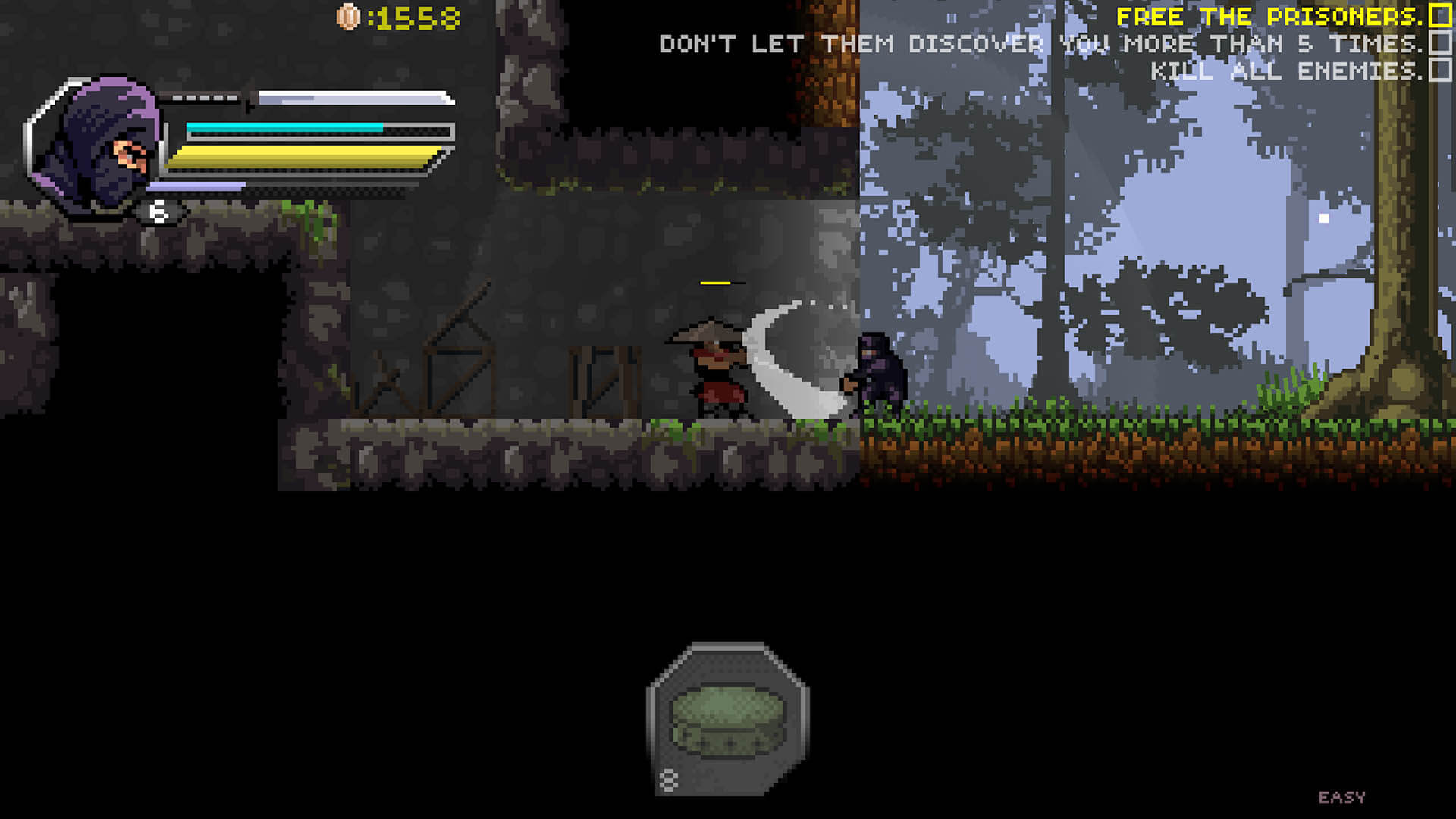 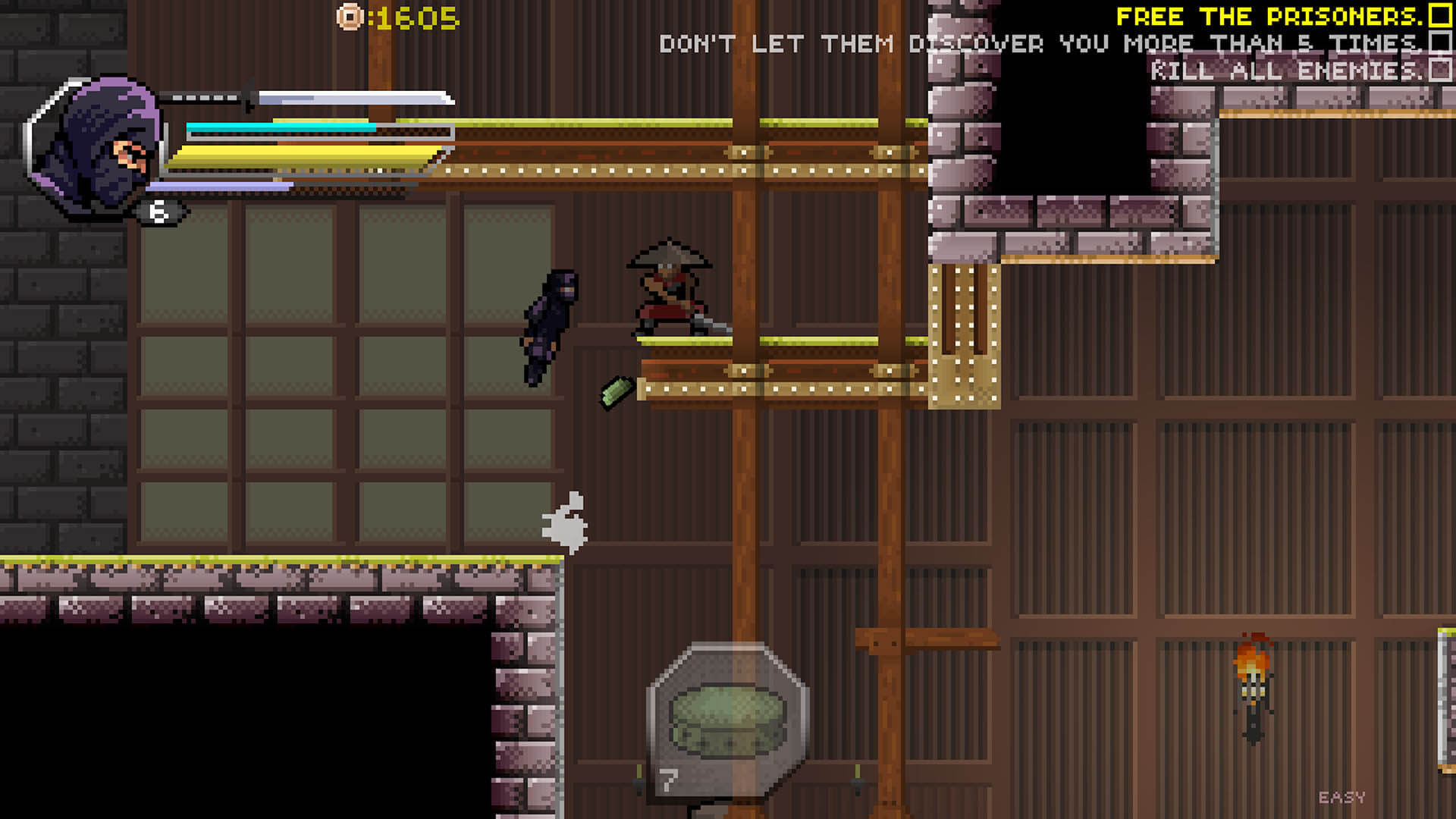 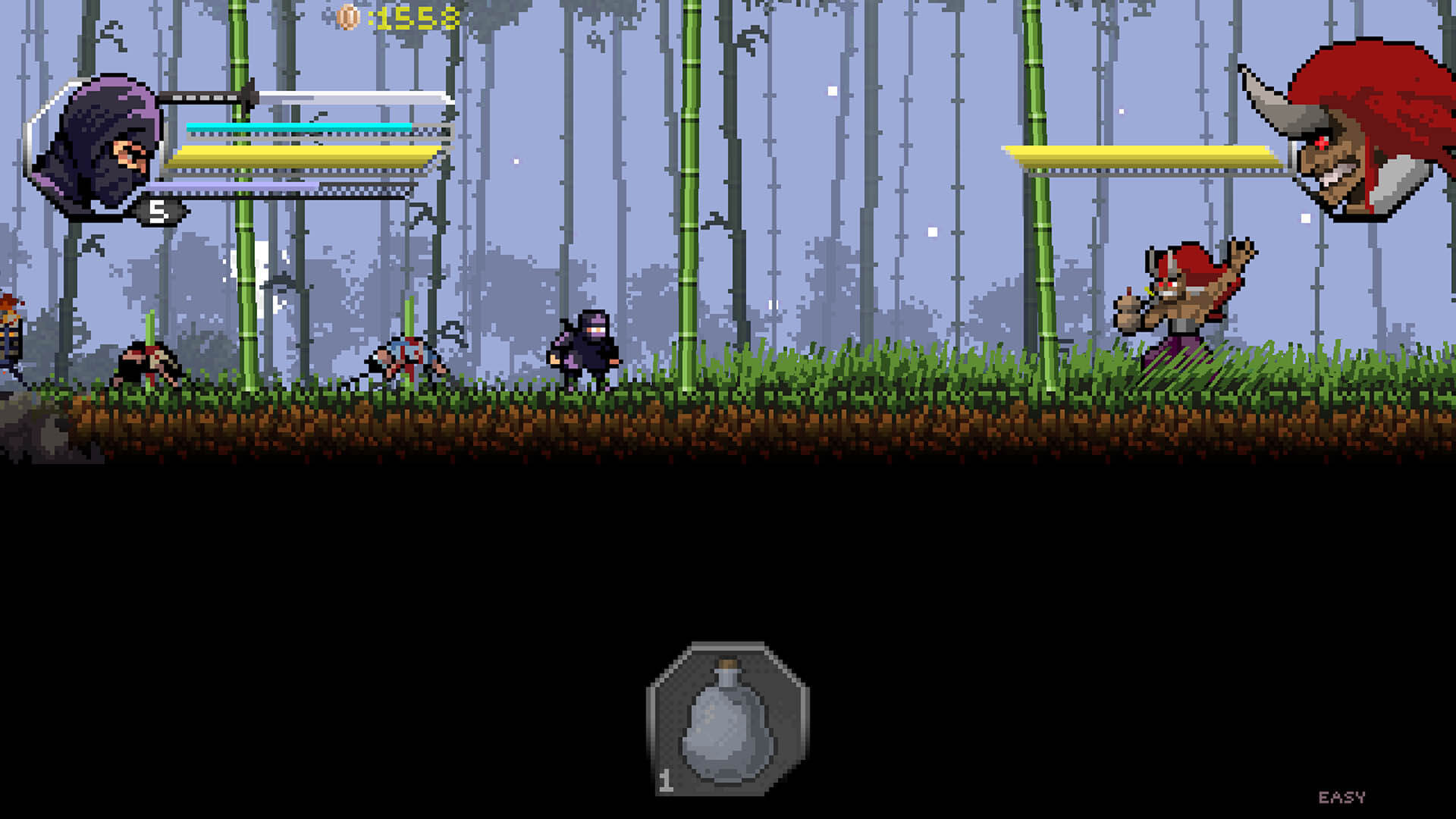 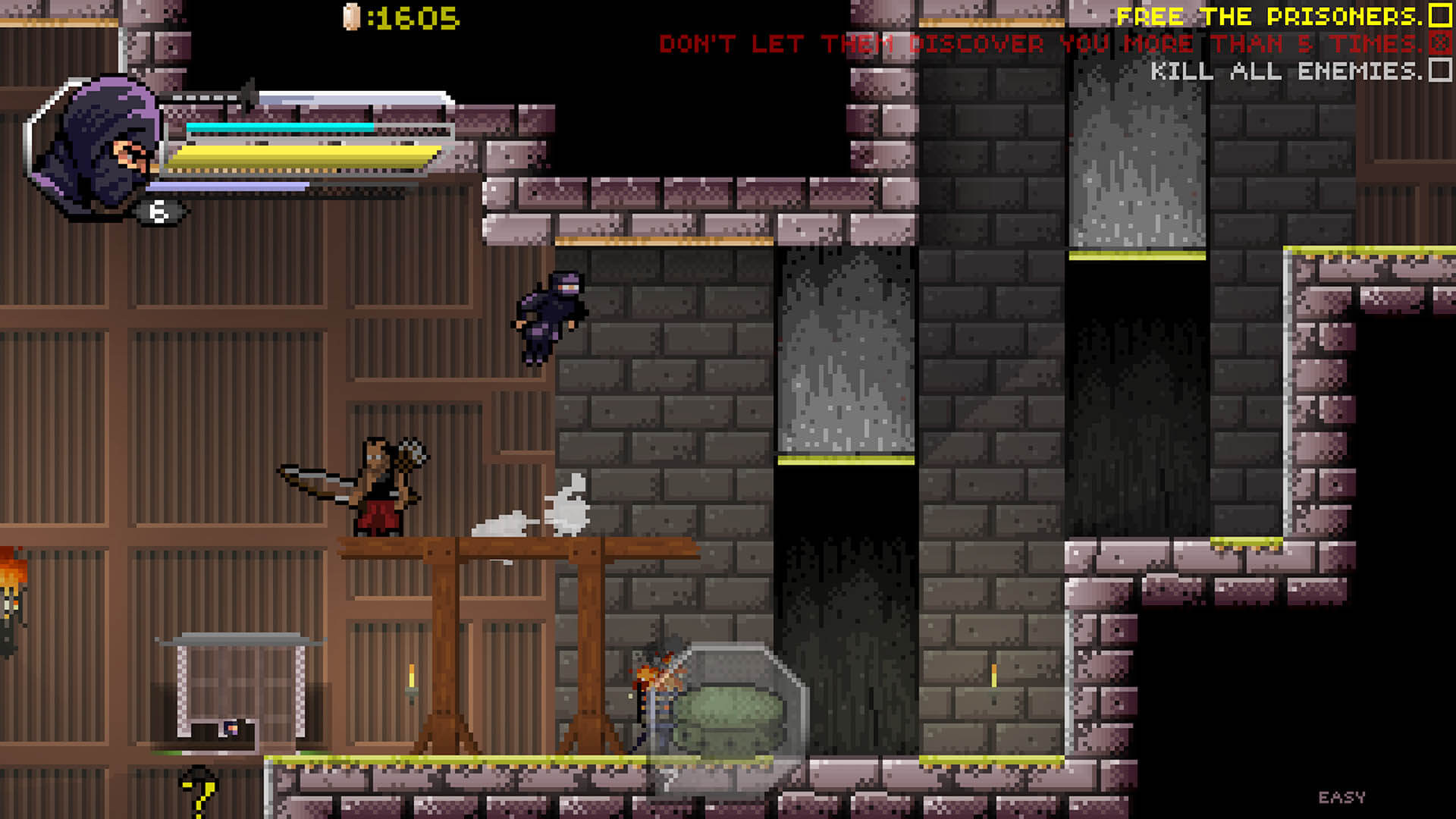