‘Dead Cells’ has grown substantially since its initial Early Access release. With a fresh perspective, we examine the game in its current state to see how it holds up.

January 12, 2022 — The Metroidvania rogue-lite Dead Cells has been out on Switch, PlayStation, and Xbox for over three years now, four on PC if you count its Steam Early Access release in 2017. Within that time, the game has received 27 updates including balance patches and entirely new biomes.

Needless to say, Dead Cells has become an incredibly robust package with plenty of content on offer, but is the Motion Twin title still a fun game to play in 2022? Considering I have now lost count over my total number of attempted runs, the answer would have to be an unequivocal yes.

More Than Meets the Eye

Much of this enjoyment, especially early on, had to do with Dead Cells’ combat system. At first, the combat does n0t seem like it has much to offer. Players can equip a maximum of two main weapons and two sub-weapons at any given moment, each of which only has one or two actions associated with it. So if the player obtains a melee weapon, for instance, the most they can usually do with it is a simple three-hit combo. 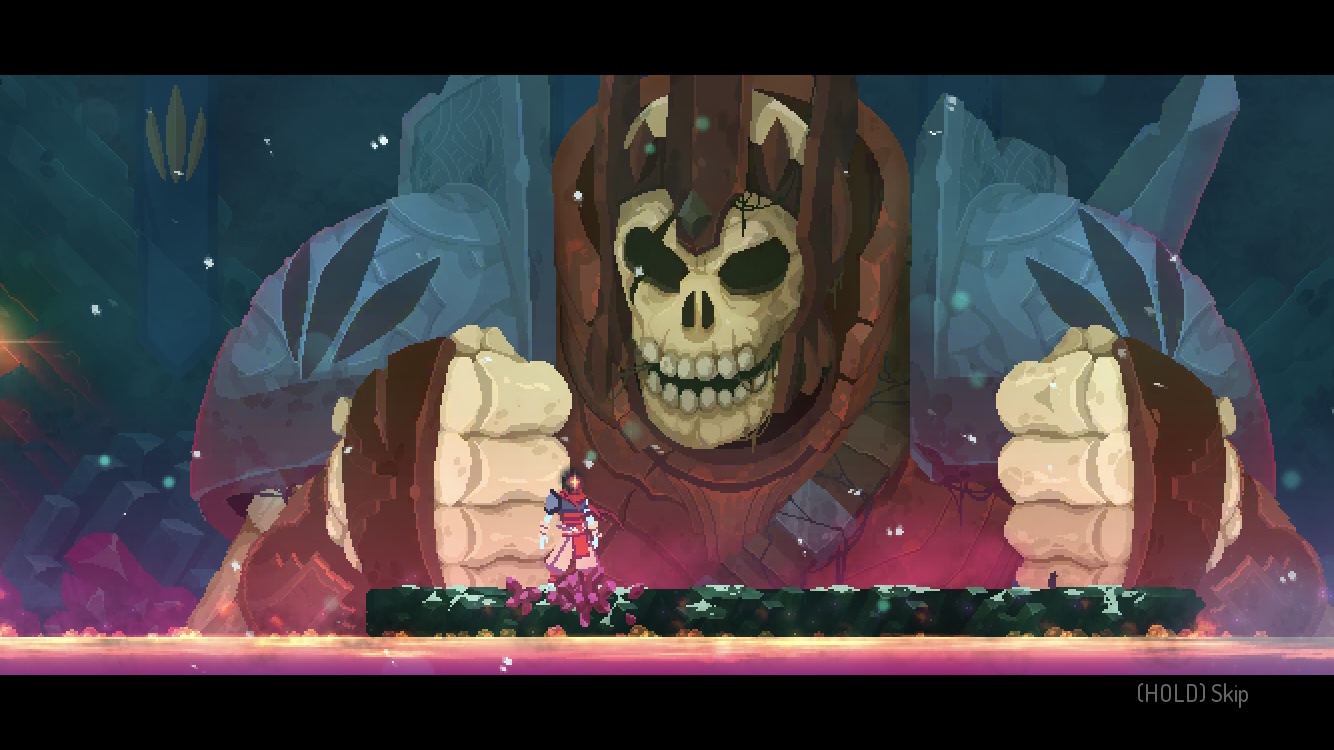 This limited number of options can seem overly restrictive, but the vast array of collectible weapons more than remedies the action. Nearly every potential combat scenario is covered by at least one of these killer tools, which range from dual blades for quick strikes, arrows, and stationary crossbows for long-distance damage, and even a Guacamelee-themed chicken transformation for attacking while on the retreat. The varied weapons already make the combat a joy to experiment with on their own, but what really justifies their inclusion are the tiny nuances used to distinguish otherwise similar weapons. 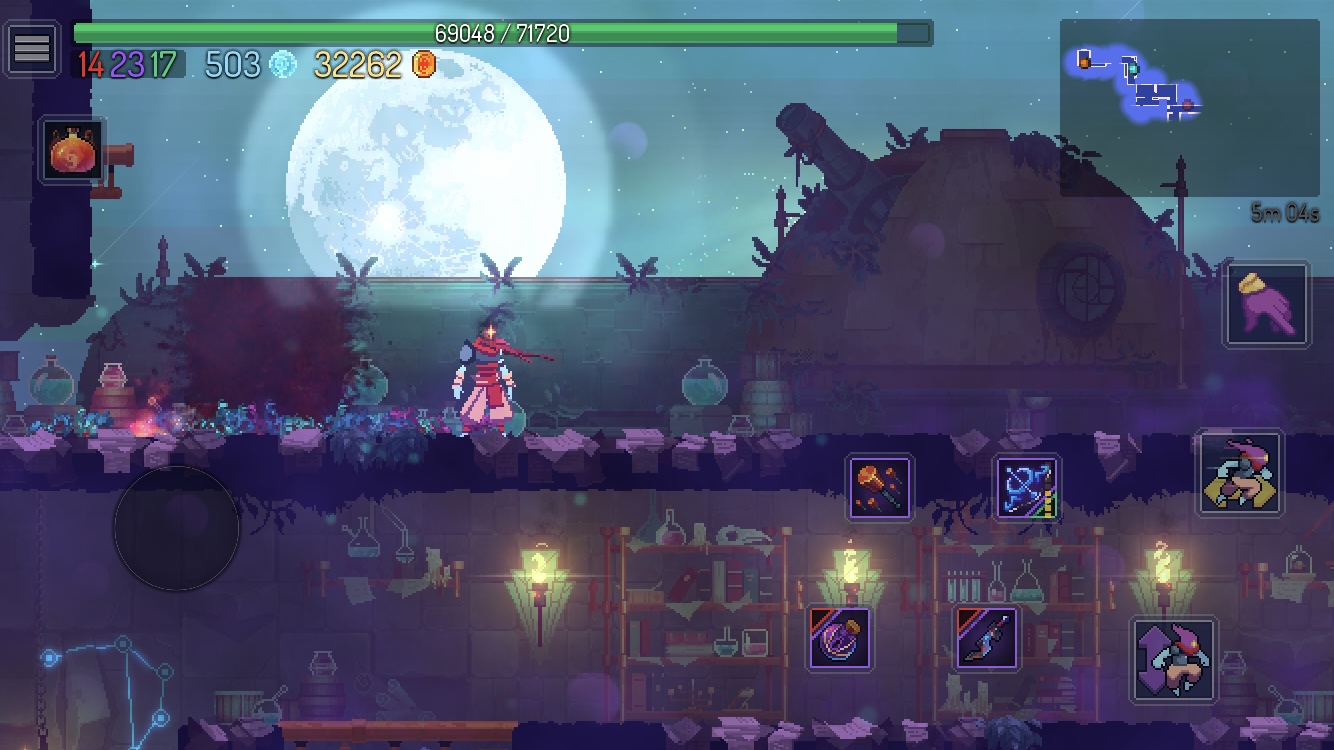 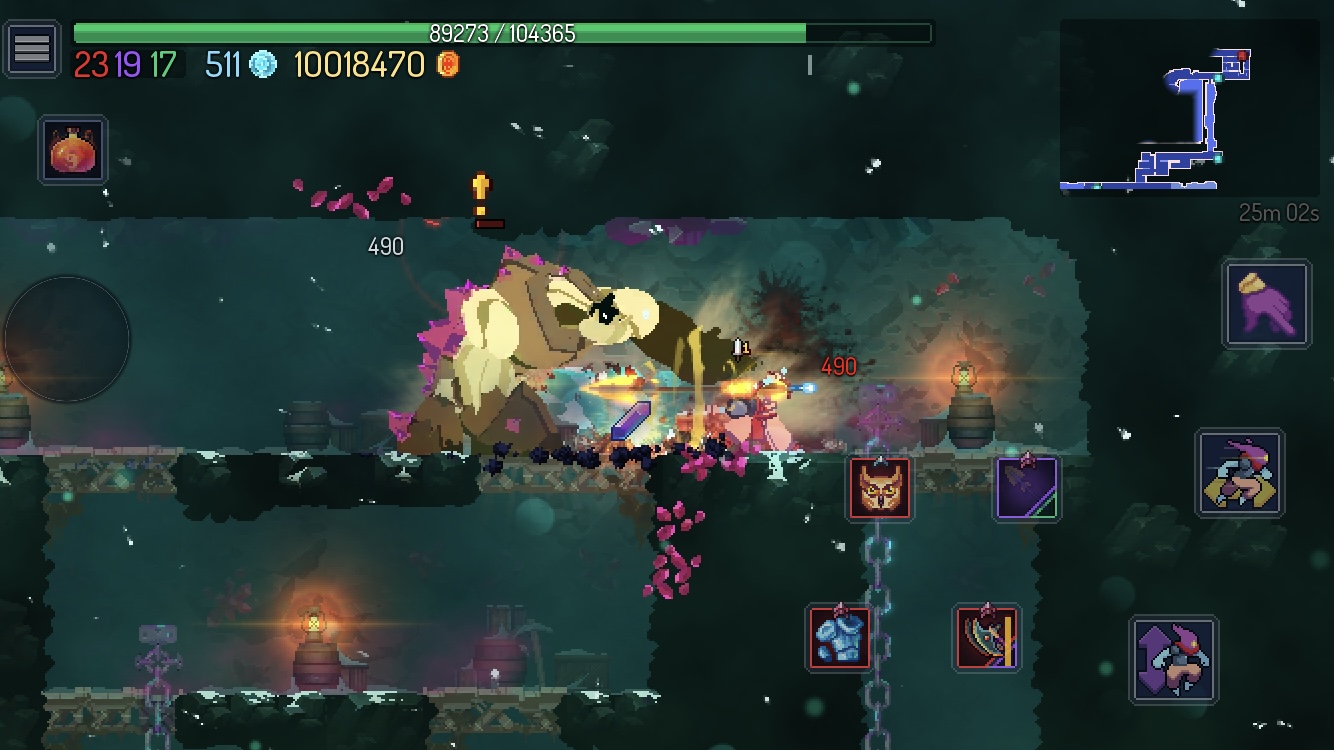 For instance, although the dual blades, assassin’s dagger, and rapier are all fast melee weapons, players will need to change the approach fairly drastically for each one if they wish to take full advantage of their critical hit properties. Since the critical hit for dual blades activates on every third hit, players are incentivized to use the Bayonetta-inspired dodge offset ability so they can more easily initiate the third combo attack in the thick of battle. Meanwhile, the assassin’s dagger encourages players to stay behind enemies as often as possible to maximize its critical damage, and the rapier demands regular use of dodges and parries to do the same. These seemingly minor mechanical differences are shockingly effective at giving each and every weapon its own identity, and they really motivated me to continually reconsider my approach to combat encounters.

What makes the combat system feel truly special is the multitude of ways in which it incentivizes fast, aggressive play. Because dodges are so quick and have fairly generous invulnerability frames, players can easily weave them in between flurries of strikes to keep the flow of combat going even in dangerous situations. Additionally, breaking open doors and ground-pounding from great heights stuns nearby enemies, further rewarding players for staying on the move.

“Best of all, killing enemies in quick succession grants a hefty speed buff for as long as players can keep going.”

Best of all, killing multiple enemies in quick succession grants a hefty speed buff for as long as they can keep the combo going. What starts as a simple jog breaks into a full-on ninja run as players carve down whatever gets in their way, allowing them to effortlessly coast through the environment at an exhilarating pace. This small addition imbues the combat with a wonderful sense of fluidity, which is only made better by the spectacularly dynamic sprite animations and sound design. 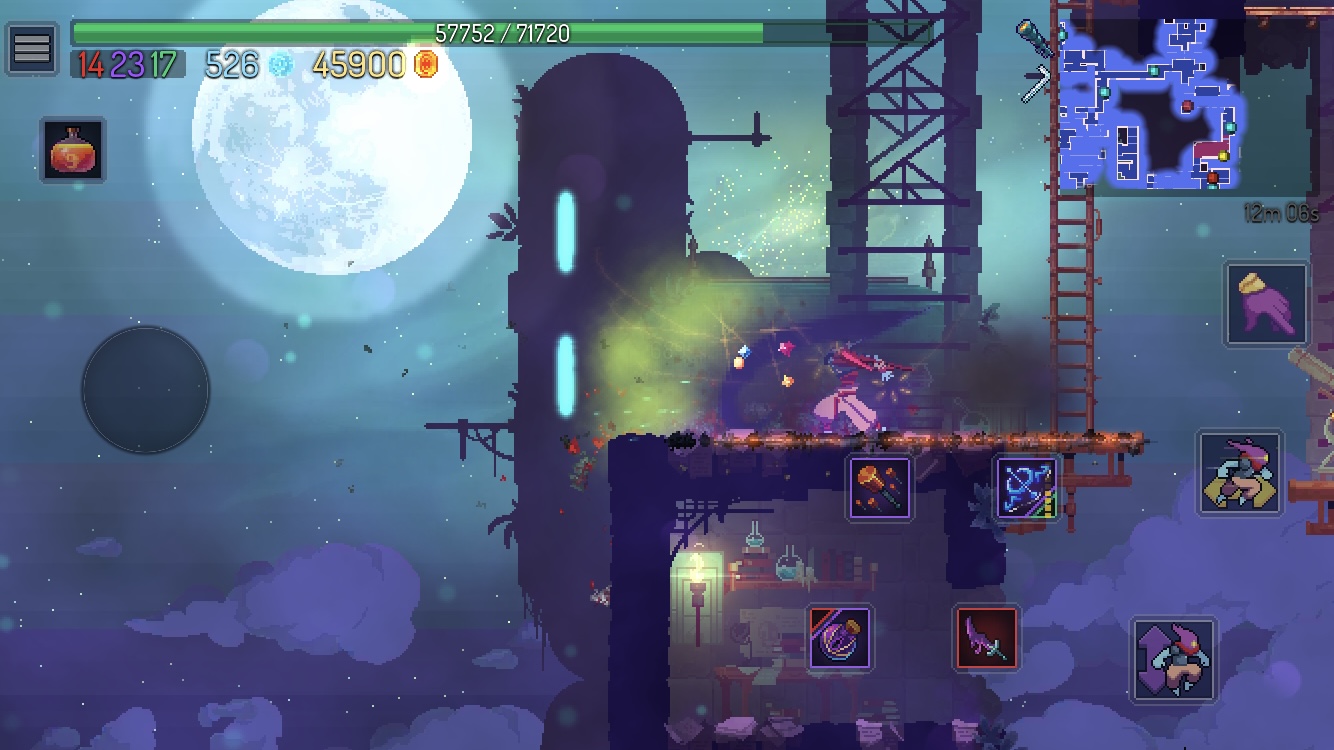 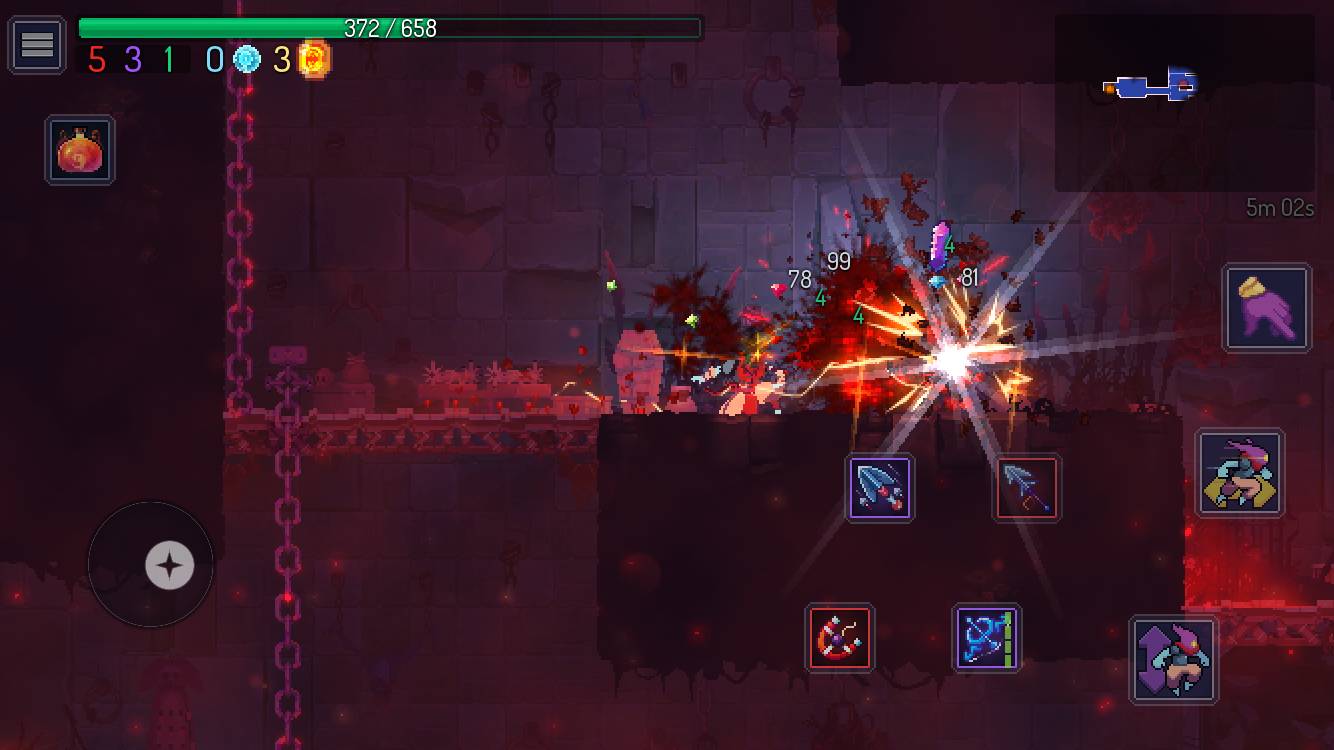 Ideally, a rogue-lite with permadeath mechanics like Dead Cells would ensure that repeat runs do not become too stale. Thankfully, Dead Cells handles this aspect expertly for the most part, as several events, rooms, and areas gradually unlock across multiple runs. While this does not necessarily guarantee that players will always discover something new during each run, it does mean that players who experiment, push themselves, and think outside the box are consistently rewarded, which is immensely valuable in and of itself.

Additionally, the game is structured so players cannot visit each of its many biomes during a single run, which makes the process of exploring Dead Cells across multiple playthroughs even more exciting. Even better, the game goes out of its way to give almost every biome its own mechanical identity. For instance, Stilt Village is more or less structured as a large hub with multiple sub-areas to explore and plunder, while the Slumbering Sanctuary requires players to find a switch that brings all of the area’s enemies to life before they can progress.

Although these different levels are procedurally generated on the fly, they consistently maintain their basic mechanical and structural frameworks in each run, which further enhance the feeling of exploration and discovery and make all stages feel like more than just background assets. 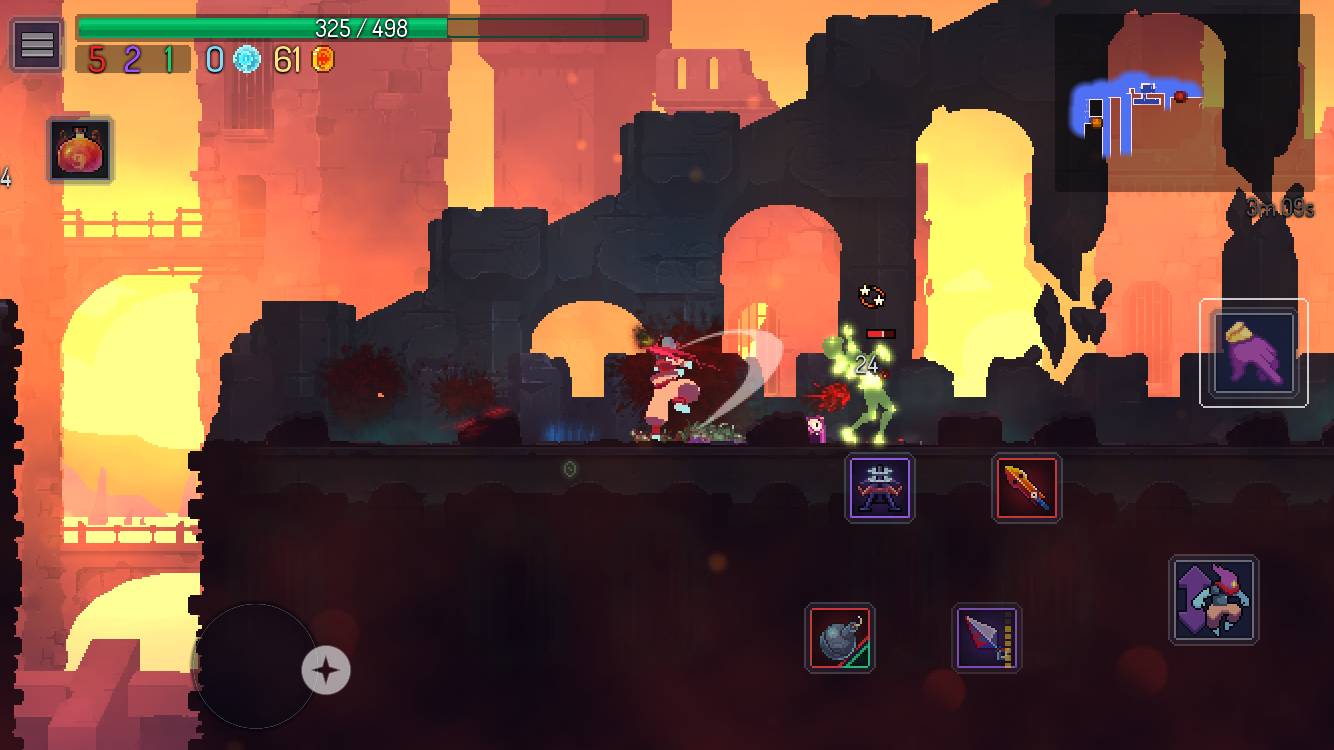 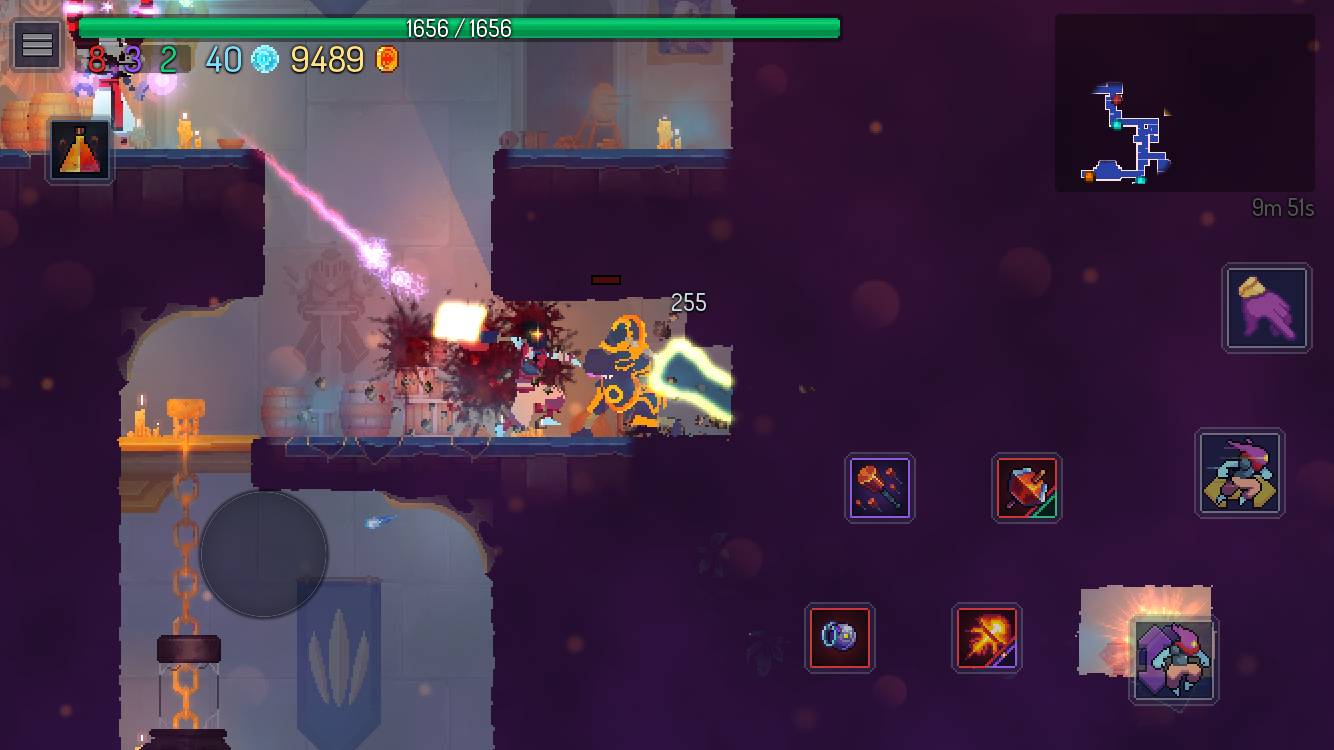 Updates Can Only Fix So Much

The consistently solid execution of nearly every aspect of Dead Cells is truly remarkable, but not everything is handled perfectly. One of the early-game weapons that can spawn, the Frost Blast, is a little too effective at rendering enemies almost completely unable to act. Since it freezes enemies, you would think that it would come with some kind of disadvantage, such as a long cooldown period after use, but no such disadvantage exists, allowing players to spam it with impunity. In a game with such high weapon variety, it was perhaps inevitable that at least one of them would end up a little overpowered. Even so, while it is less effective against bosses, it almost completely removes the need for players to learn enemy movement patterns, which feels like a step too far.

“While there are plenty of bosses for players to take on, most of them are hidden behind specific biomes, boss stem cell doors, and paid DLC.”

Speaking of bosses, they are all fast-paced and do a decent job at testing players’ reaction times, but I would not exactly call them a highlight of the experience. While there are plenty of bosses for players to take on, most of them are hidden behind specific biomes, boss stem cell doors, and paid DLC. This means that until players become more devoted to the game, they will inevitably fight the same three bosses over and over as they play through their first runs repeatedly.

Not helping matters is that the three bosses feel pretty similar mechanically, with the more unique encounters placed fairly out of the way. It would have been convenient to have more options early on in terms of boss fights, as the three standard encounters start feeling like formalities after a while.

The game’s problems are ultimately extremely minor, though, which says a lot about Dead Cells’ sheer quality as a game. Its polished, well-considered mechanics make every run an absolute treat, and it is easy to end up playing for hours straight after intending to spend only half an hour with it. Time has only been kind to Dead Cells, and it will likely improve even more in the near future as new DLC becomes available.

Dead Cells is available now on PlayStation, Xbox, Nintendo Switch, Windows, and macOS. The price on Steam at the time of writing is 24.99 USD/EUR. 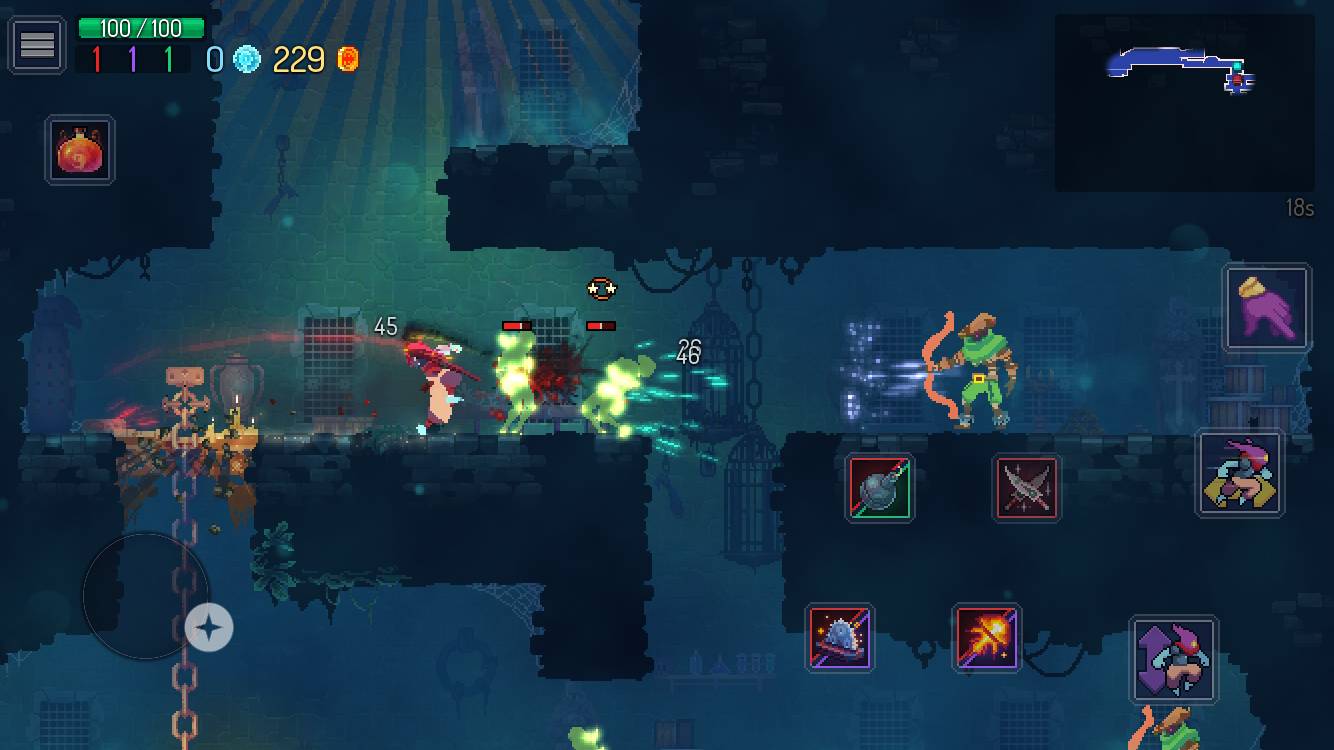 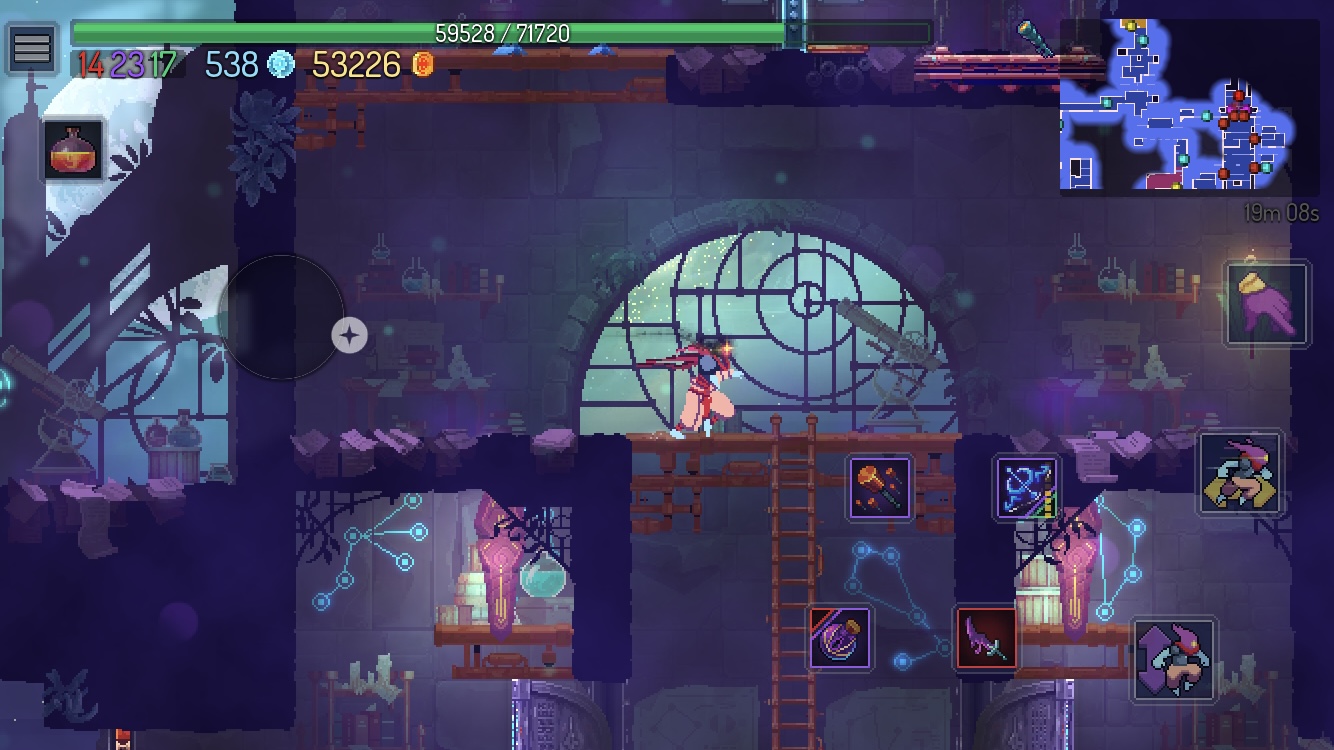 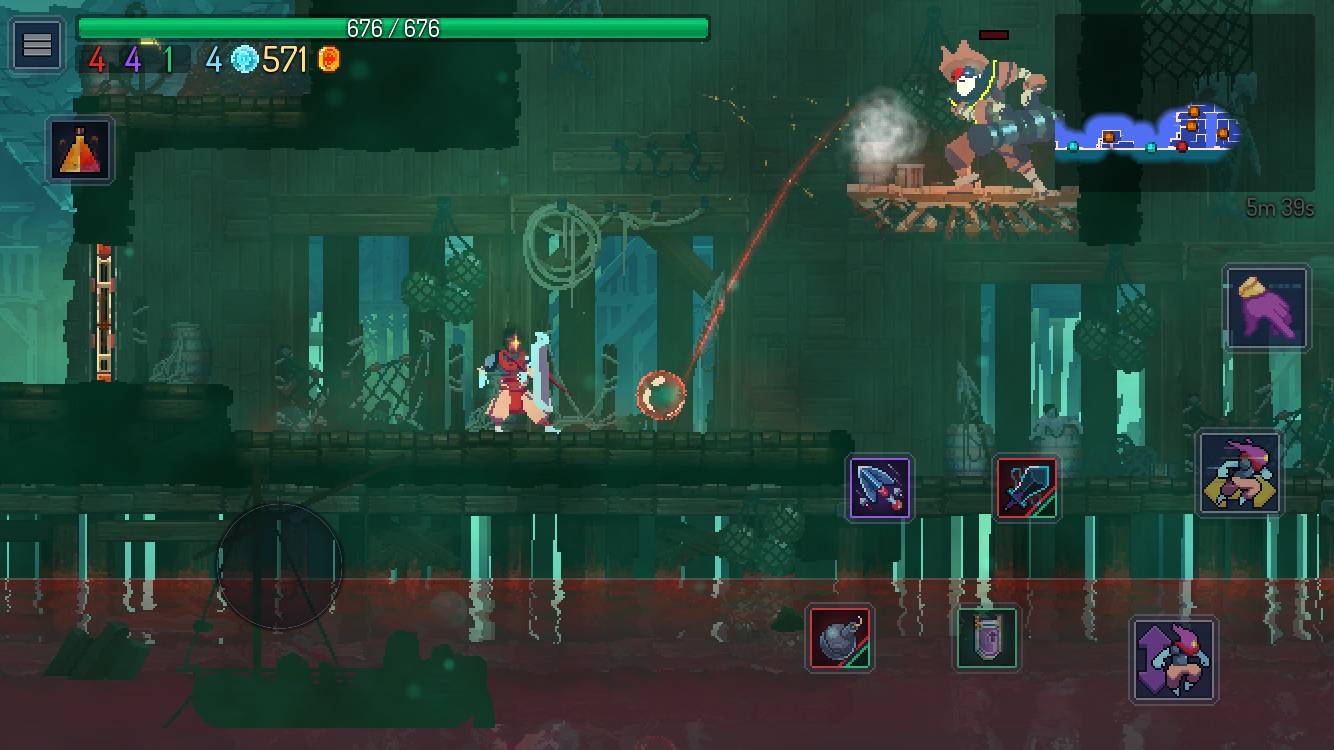 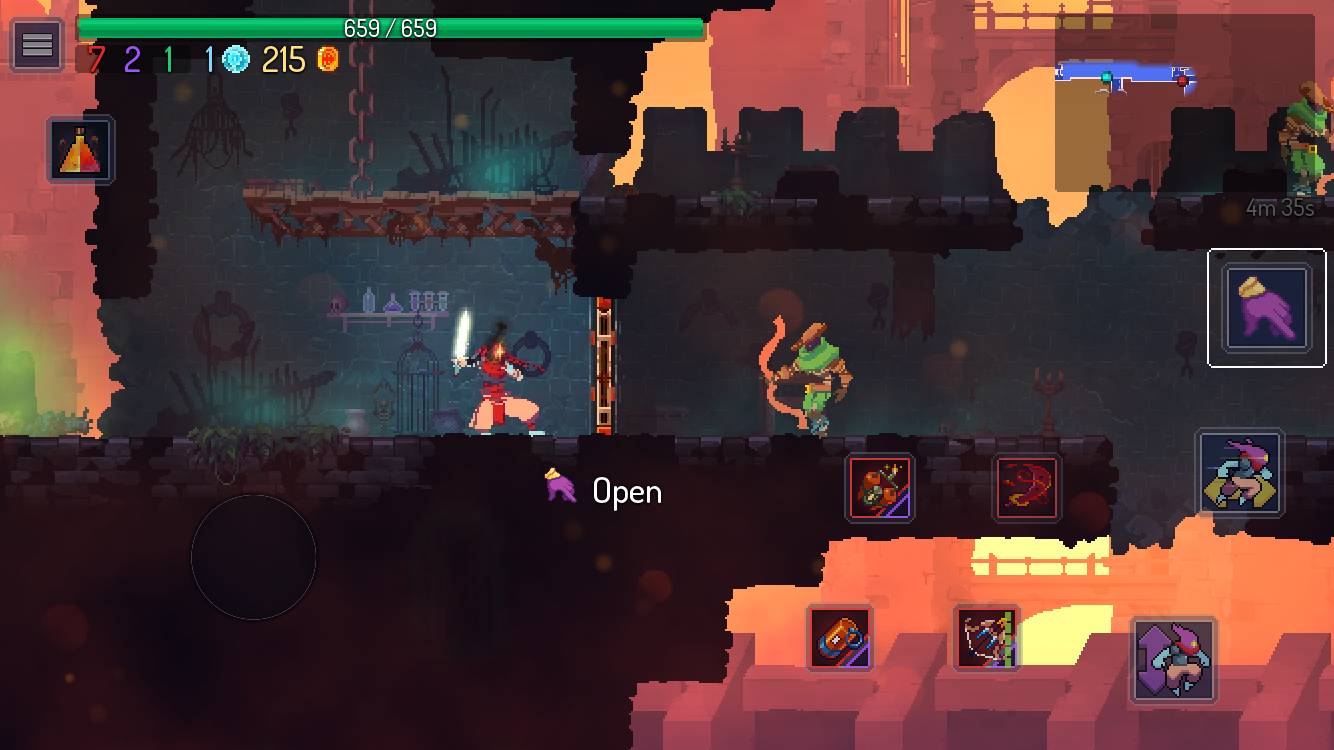 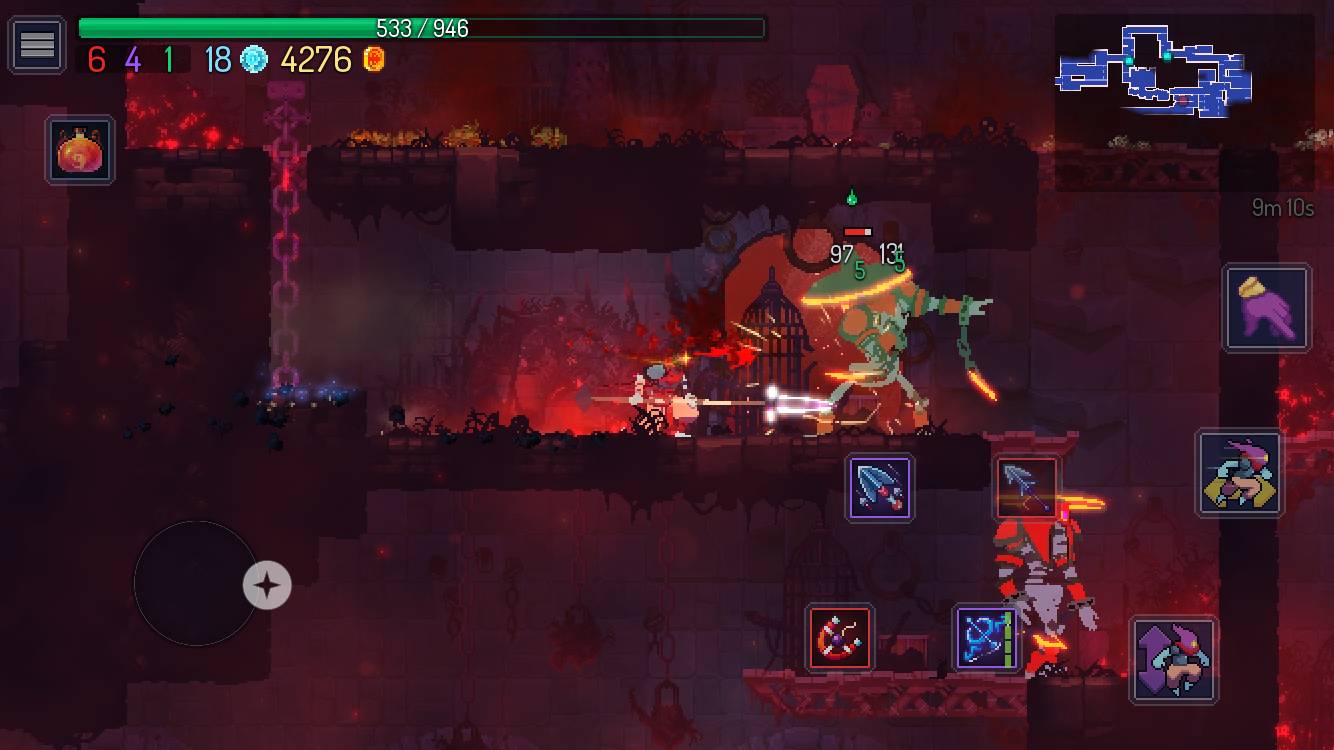 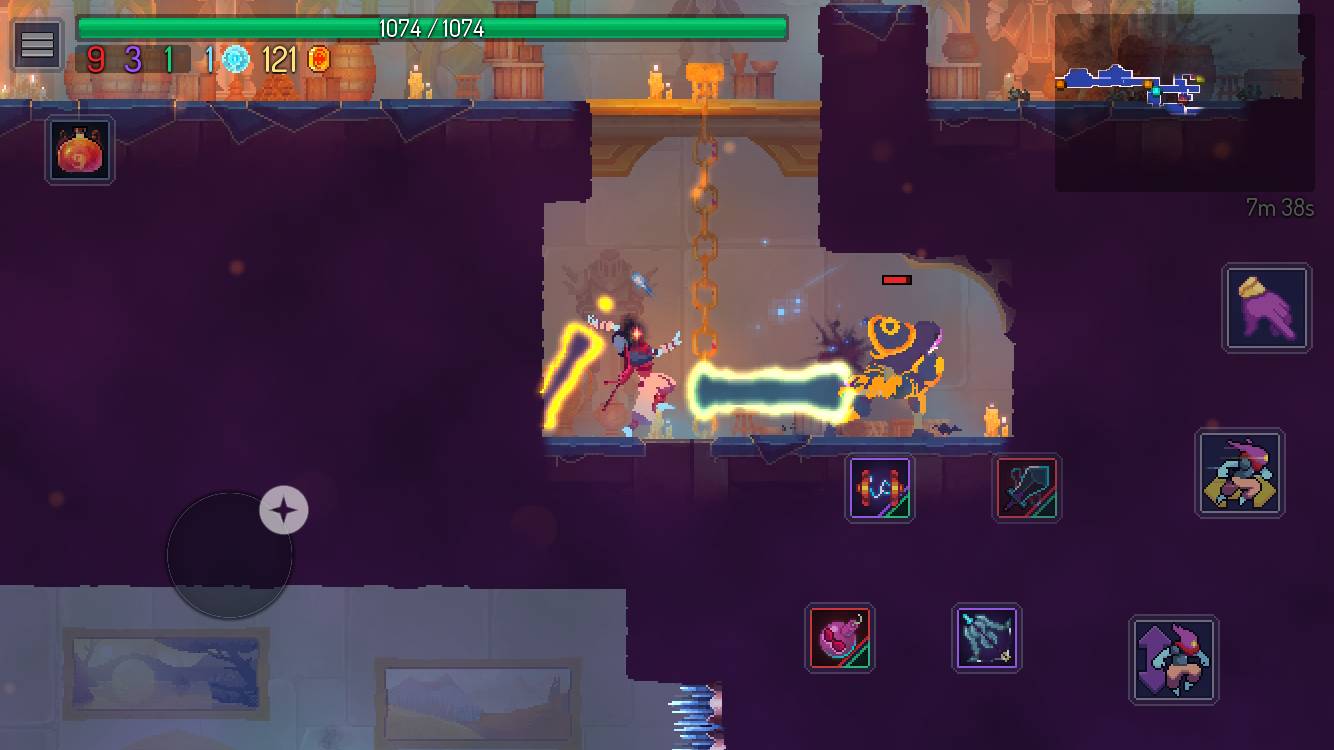 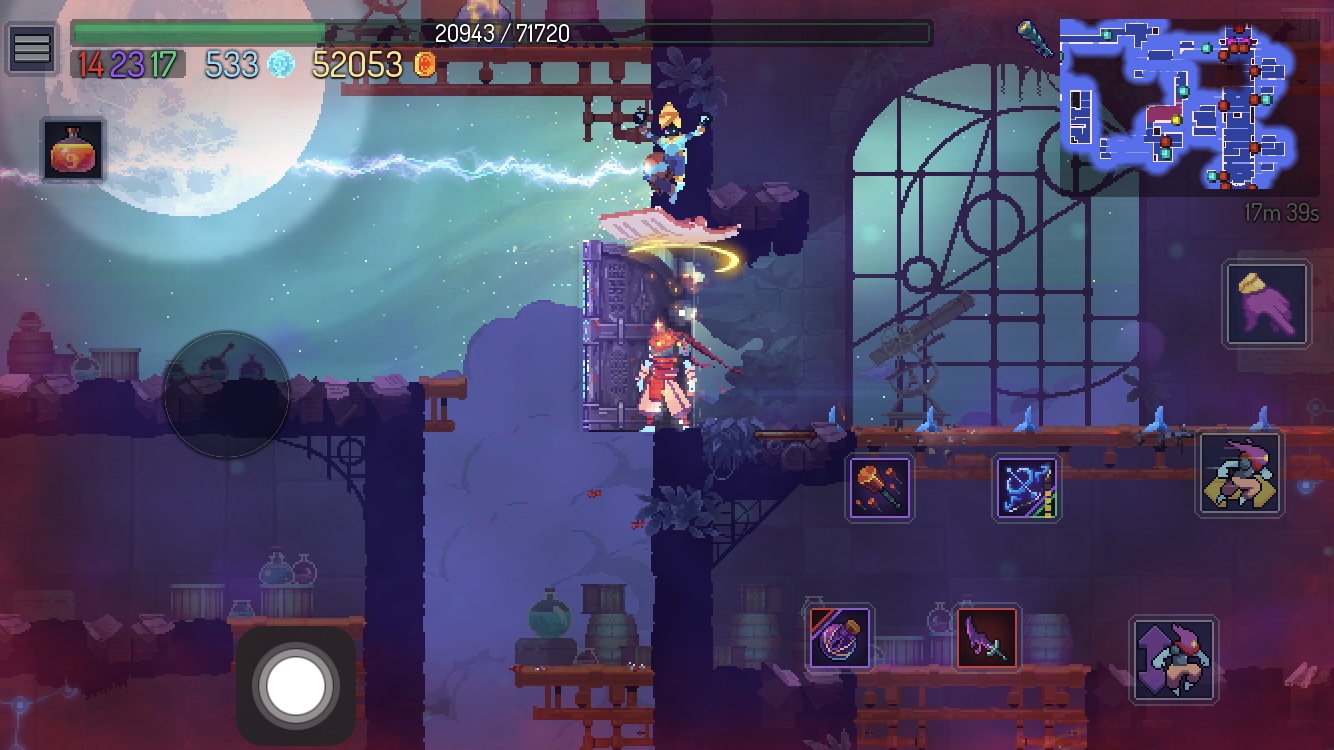 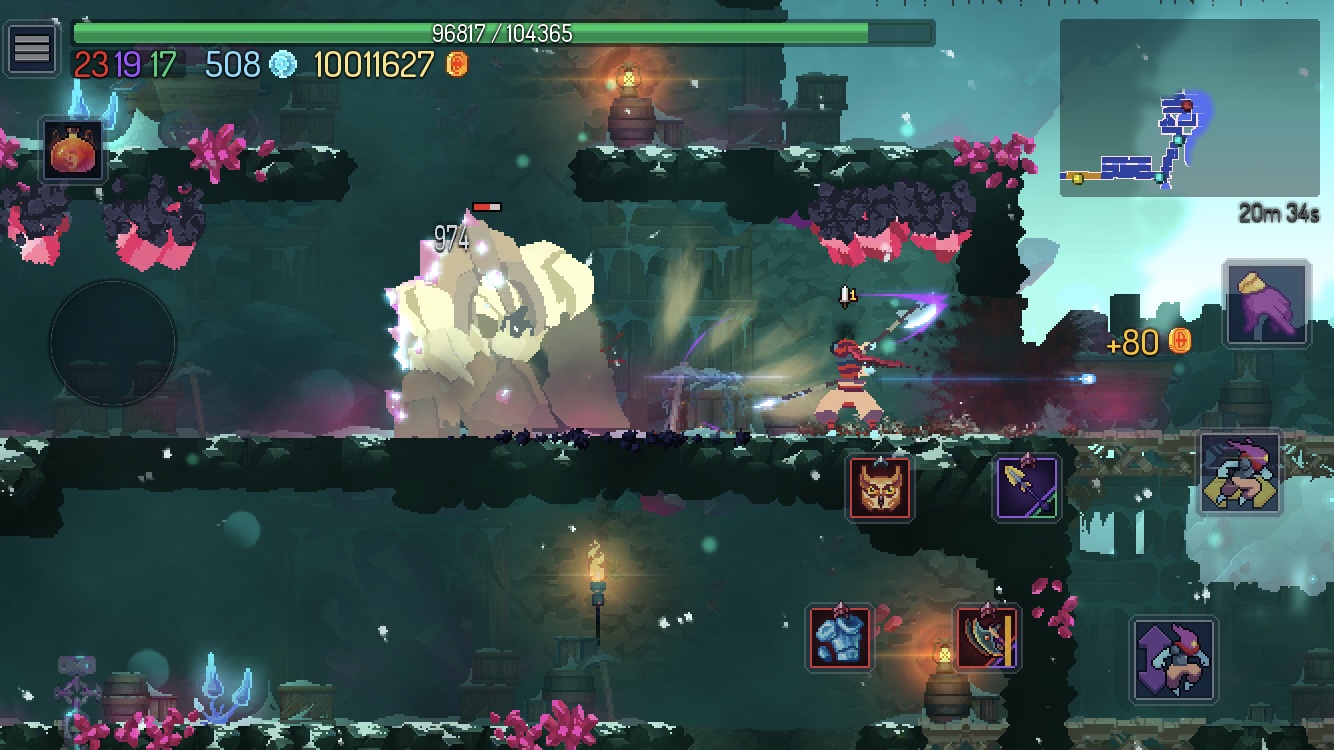 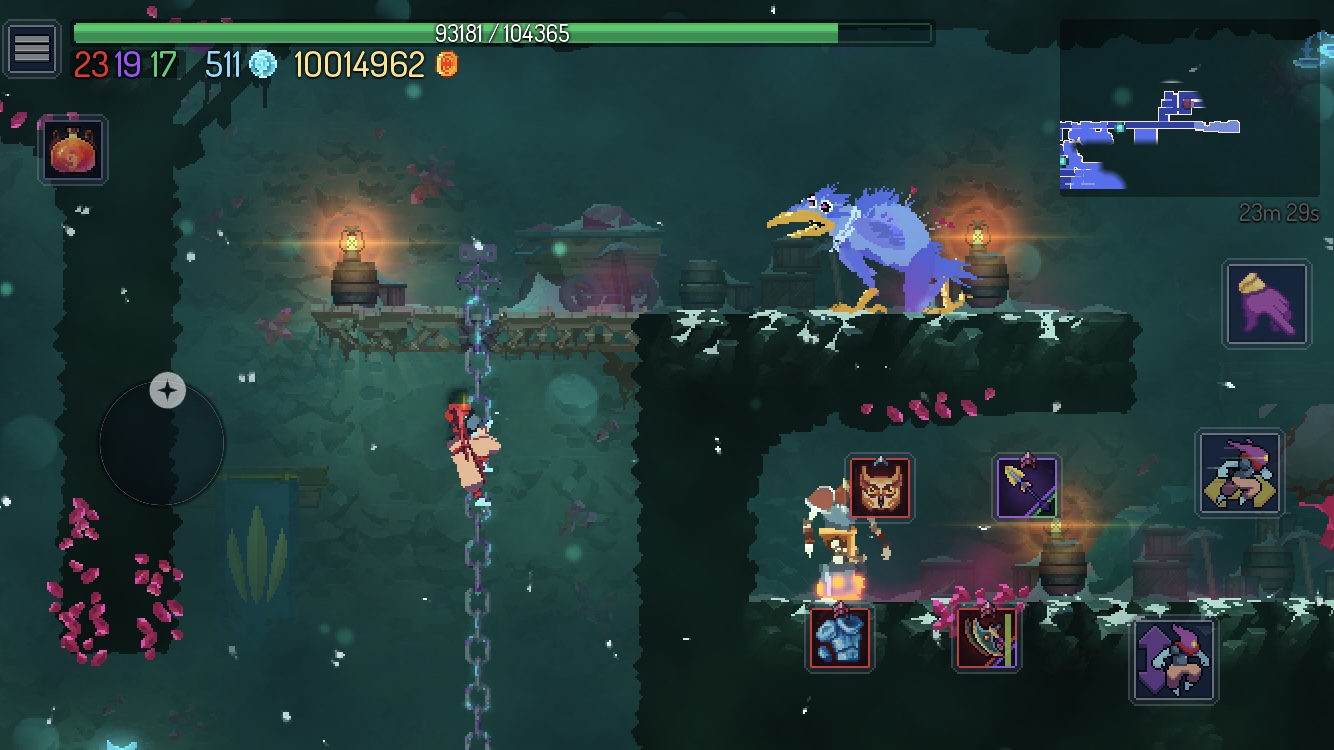 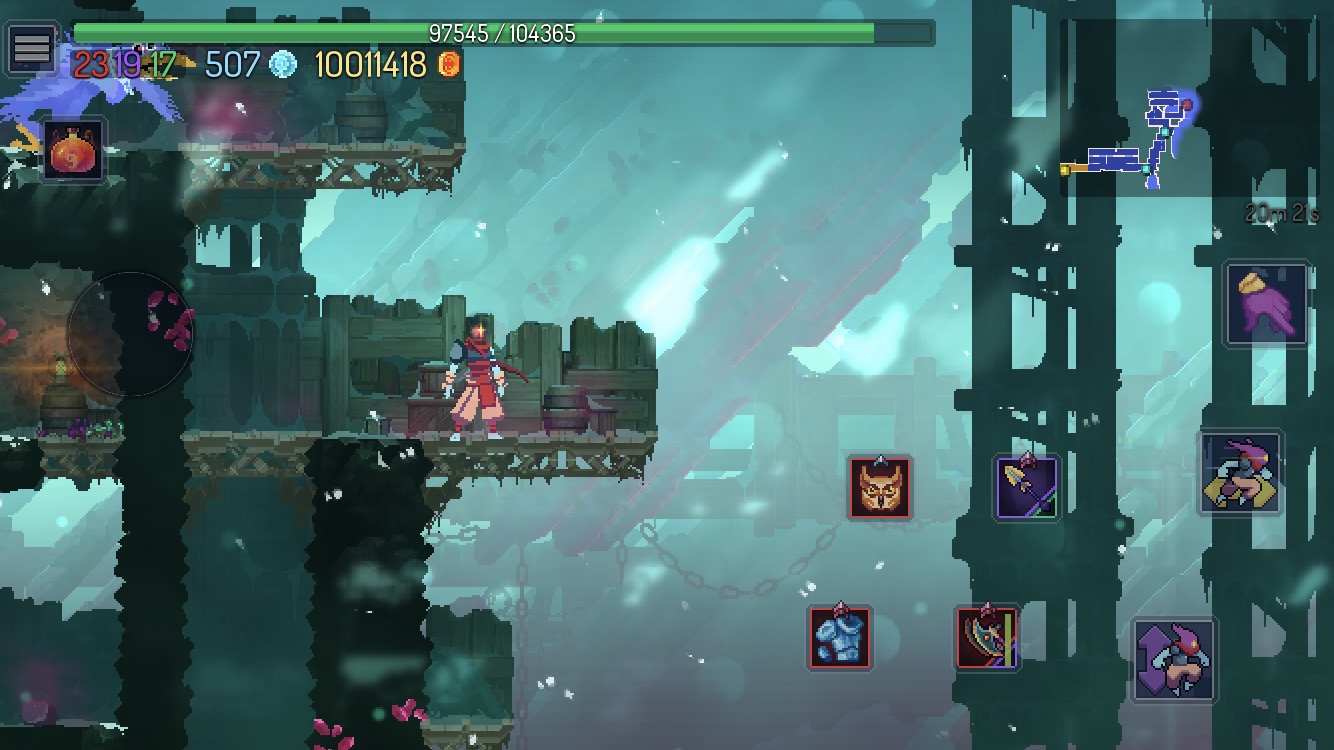 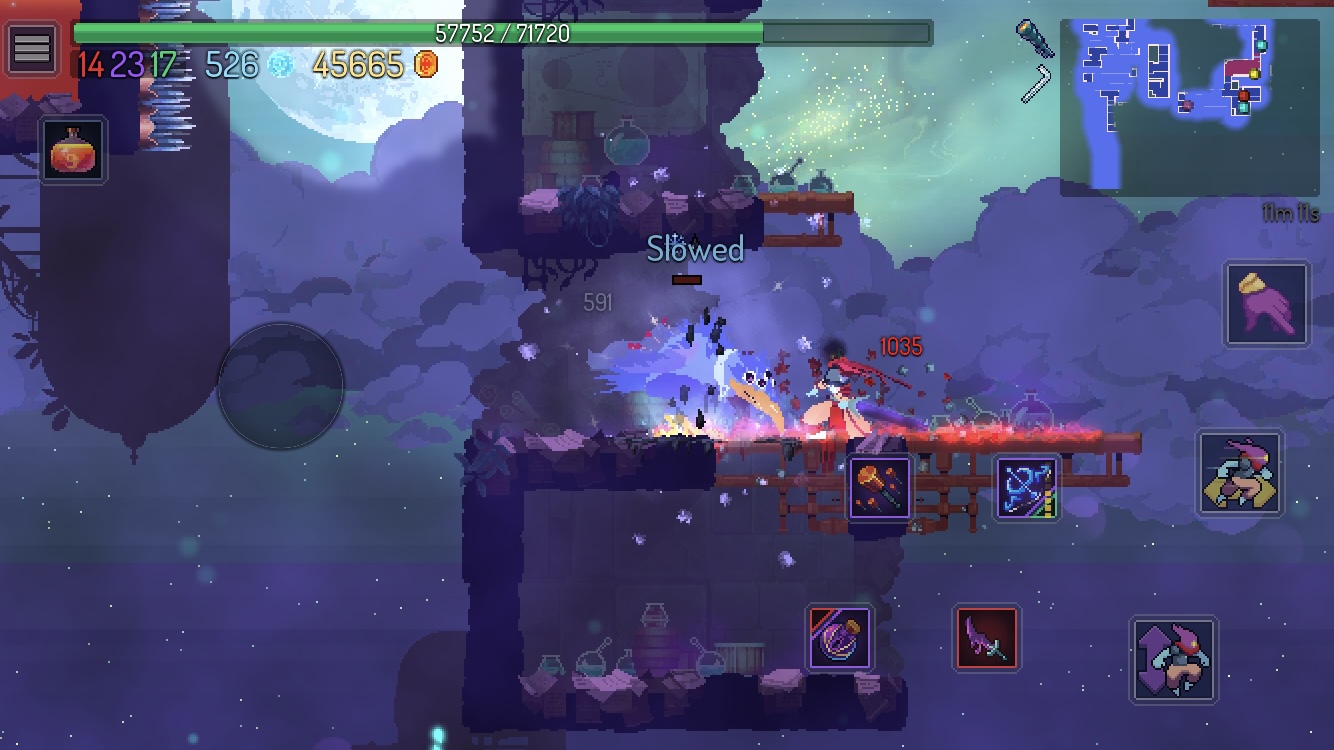