Co-developed with Spain’s MercurySteam, Nintendo has finally added ‘Metroid Dread’ to the Switch library and it is excellent; irristeble side-scrolling love — all the way.

Thankfully, not only is Metroid Dread a fantastic addition to the series, but it also stands as one of the best games to come out this year. The series’ return to its sidescrolling, explorative roots is a sign that Nintendo acknowledges the existence of an enormous player base that loves the kinds of 2D action platformers that dominated the 1980s and 1990s.

Controls Refined to a Mirror Shine 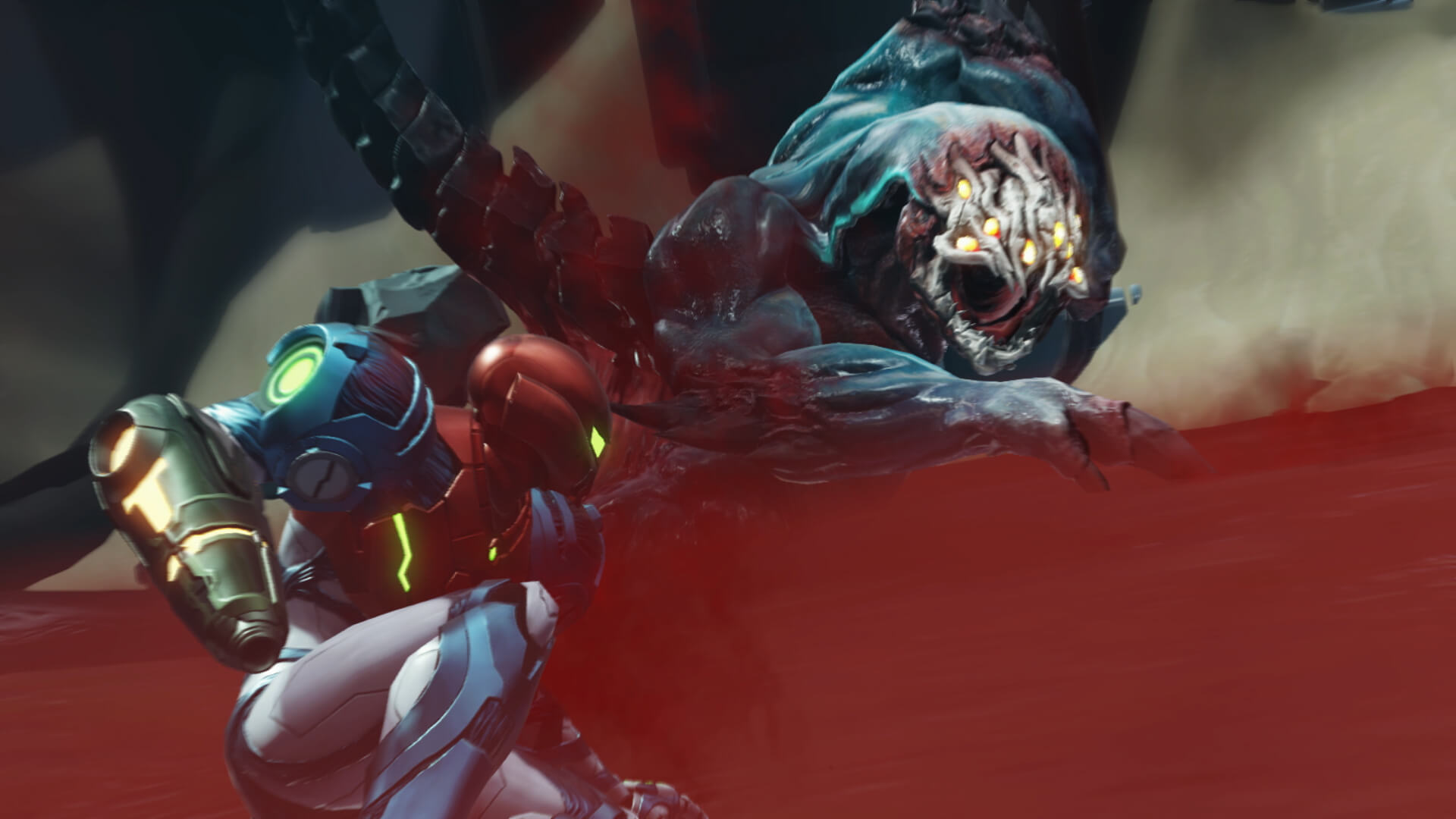 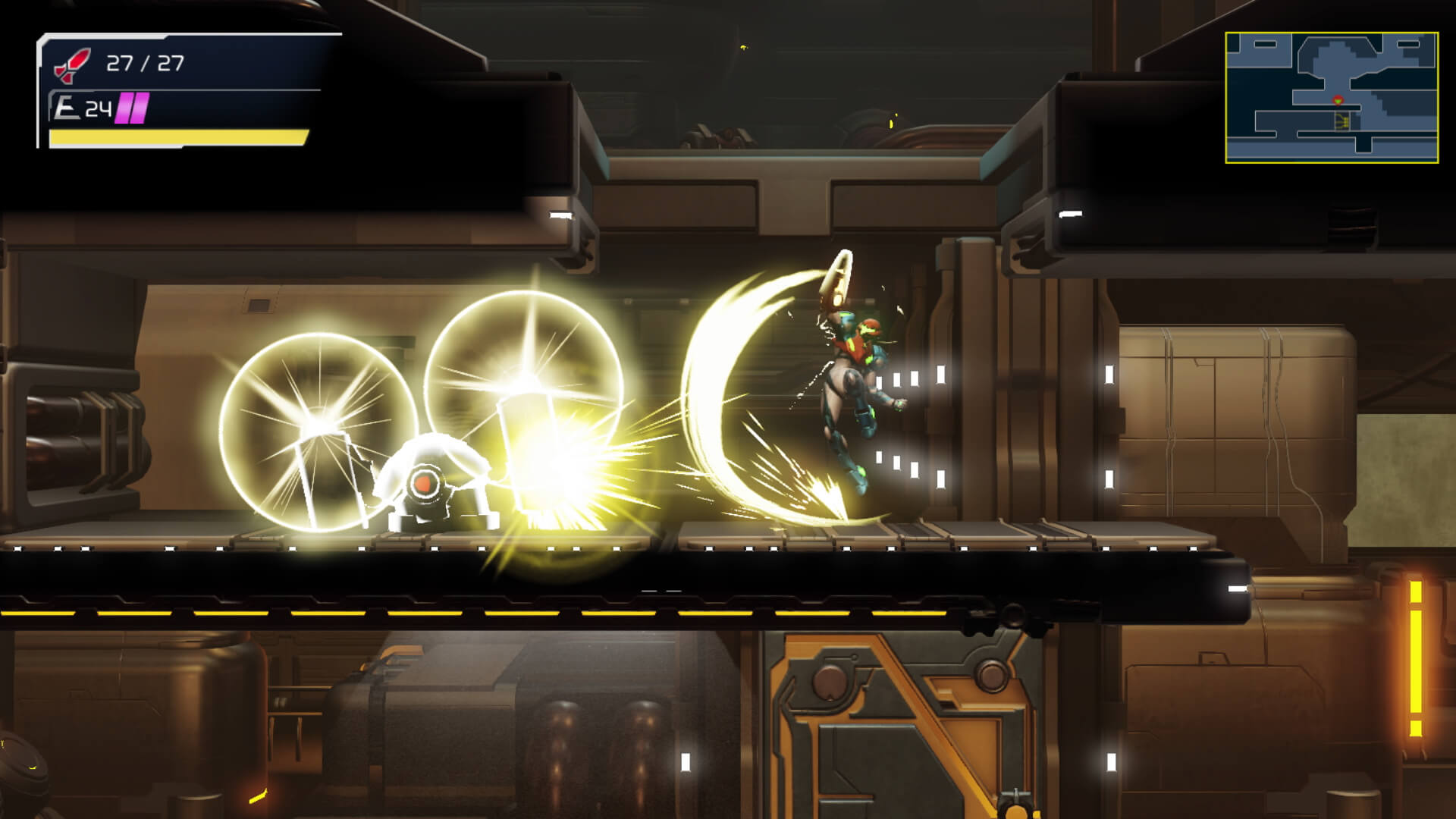 Upon starting the new game, one of the most notable aspects of Metroid Dread is how enjoyable Samus is to control. She responds almost instantly to every movement of the analog stick and push of a button, making it exceptionally easy to dash and leap through the environment with grace and fluidity. Both the 360-degree aiming and the parry mechanic from Metroid: Samus Returns are back, and they serve to make combat both easier and more engaging.

“In particular, the parry mechanic is vastly improved compared to its previous incarnation.”

In particular, the parry mechanic is vastly improved compared to its previous incarnation. Whereas Samus Returns required players to halt movement every time they wanted to counter enemy attacks, Metroid Dread allows players to parry while on the move, when clung to a wall, or even in the air. This small tweak to the controls makes countering attacks feel more integrated into the core movement system, which in turn makes combat and exploration less segregated. Wall jumping toward a platform and parrying an enemy before landing on the ground both looks and feels amazing, and scenarios like this are a testament to the incredible amount of thought that went into the game’s movement, animation timings, control system, and user interface.

Of course, because Metroid games are primarily known for their exploration, it is important for Metroid Dread to nail its map design. Fortunately, the game’s level design is nothing short of excellent, as it provides a huge, nonlinear space for players to explore while subconsciously guiding them toward the right direction. That being said, the game is not afraid to leave players feeling lost. While the level design is often content with providing players a straightforward path toward the next destination, there are still frequent moments where players must carefully study the map layout and deduce the way forward for themselves. The world design succeeds at requiring players to properly engage with the environment without leading them too astray, and the developers deserve nothing but praise for achieving such a delicate balance. 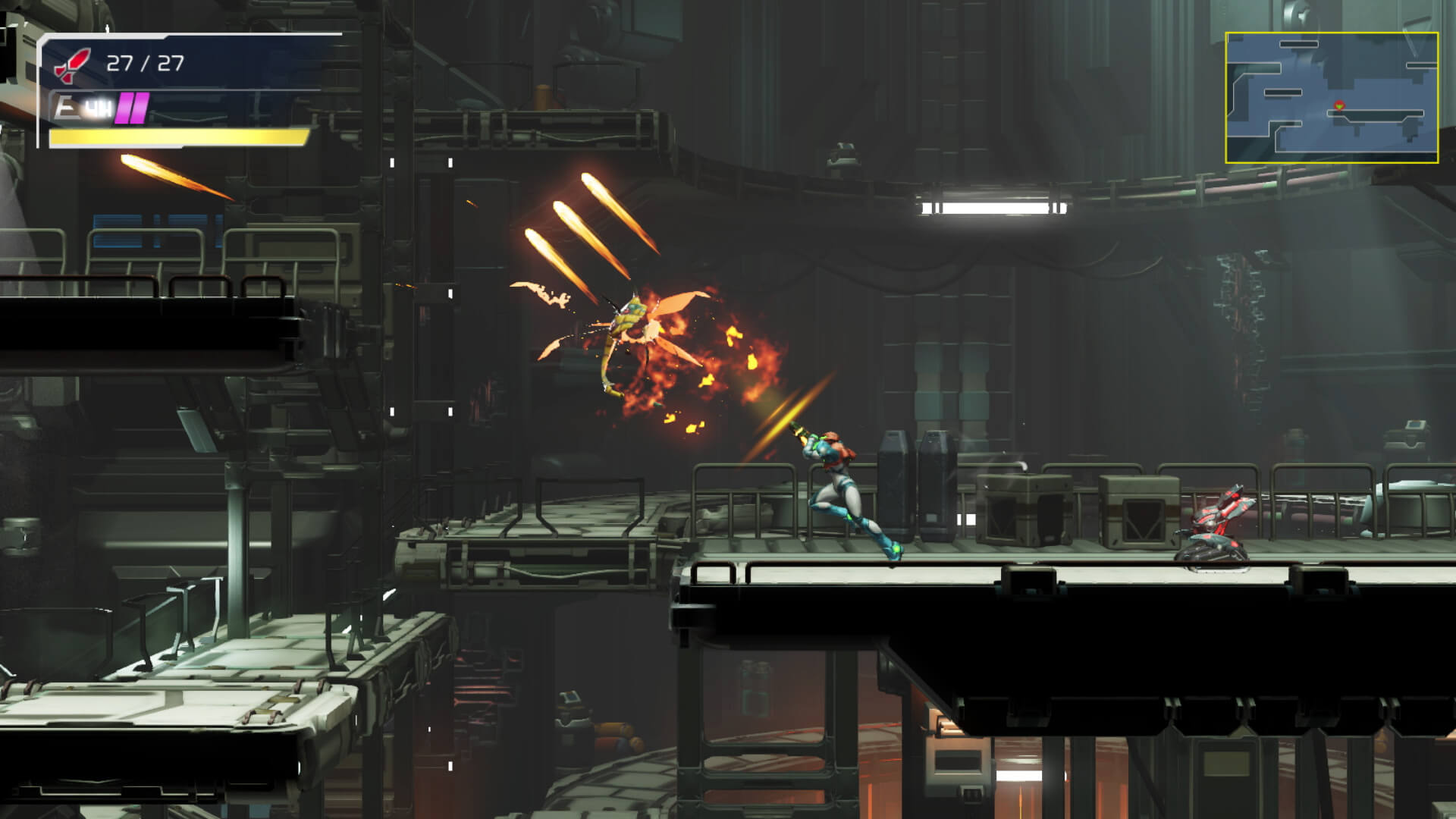 Additionally, the level design excels at making use of Metroid Dread’s myriad powerups and rewarding player ingenuity. While some of the optional upgrades are fairly trivial to obtain, others require surprisingly in-depth knowledge of the movement mechanics and powerups. In particular, some of the upgrades that require the Speed Booster demand insane levels of precision and mastery, which makes finally acquiring them all the more satisfying.

The level design also tests players’ knowledge of the controls through several secret passageways that allow players to reach certain rooms and powerups earlier than they normally would. These sequence breaks have long been a staple of the Metroid series, and they are a fantastic way to incentivize repeat playthroughs and player mastery. Metroid Dread could have easily abandoned these sequence breaks in favor of providing a more railroaded experience, but it recognizes the value in this kind of player expression, which is definitely worth celebrating.

A New Threat to Face

Extraplanetary Multiform Mobile Identifier, or ‘E.M.M.I.’, is a very powerful operative robot in the Metroid universe. Despite how expertly crafted Metroid Dread is, if it did not feature some kind of unique hook, then it might have ended up forgettable. Fortunately, the game does more than enough to separate itself from the rest of the series (and other competing titles) thanks to the ‘E.M.M.I’ sections that are contained in specific parts of the world. These challenges take the already rich and tense atmosphere of the rest of the game and crank it up tenfold, as it forces Samus to hide from and, if necessary, frantically flee from a frighteningly hostile robot. 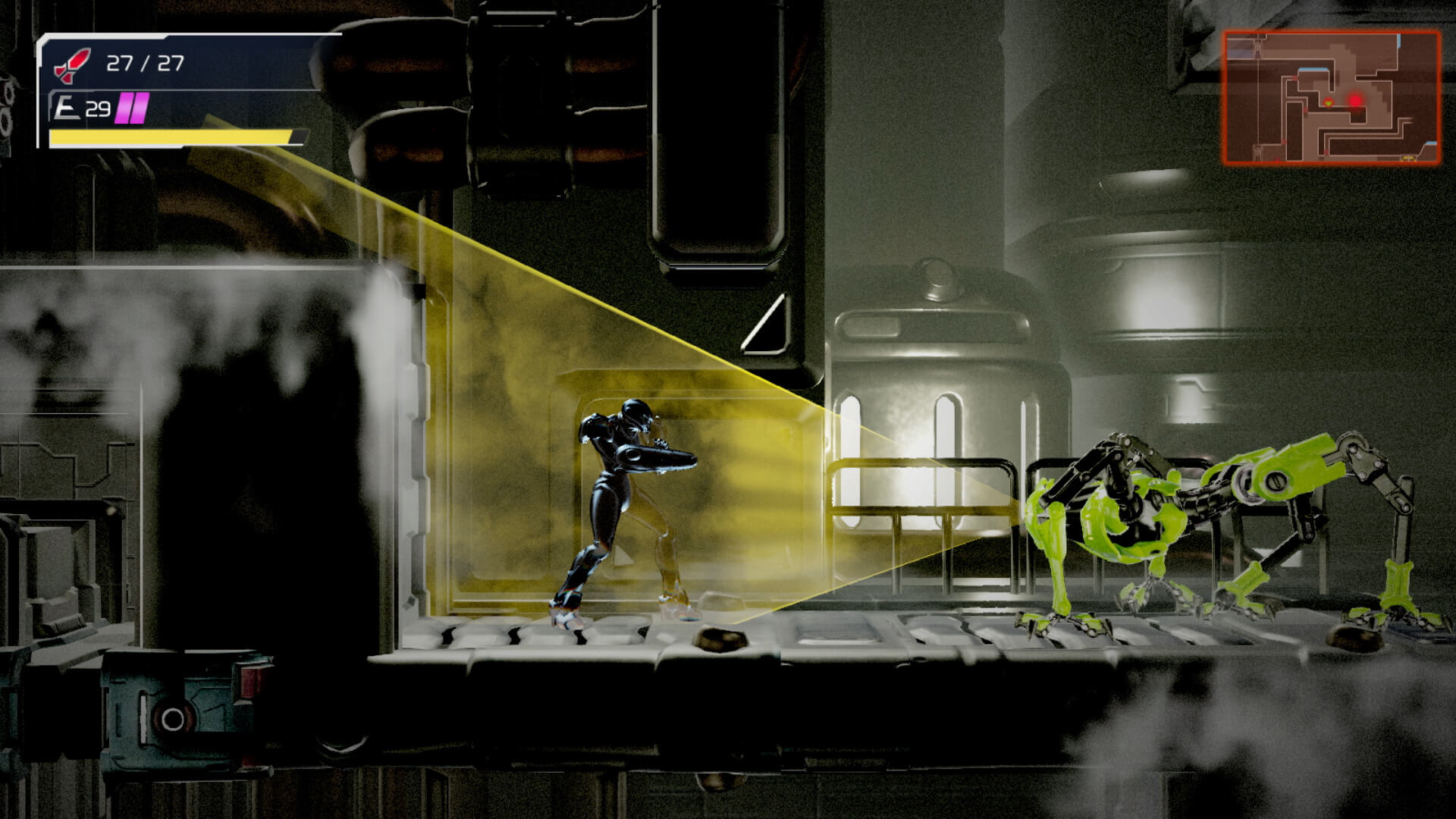 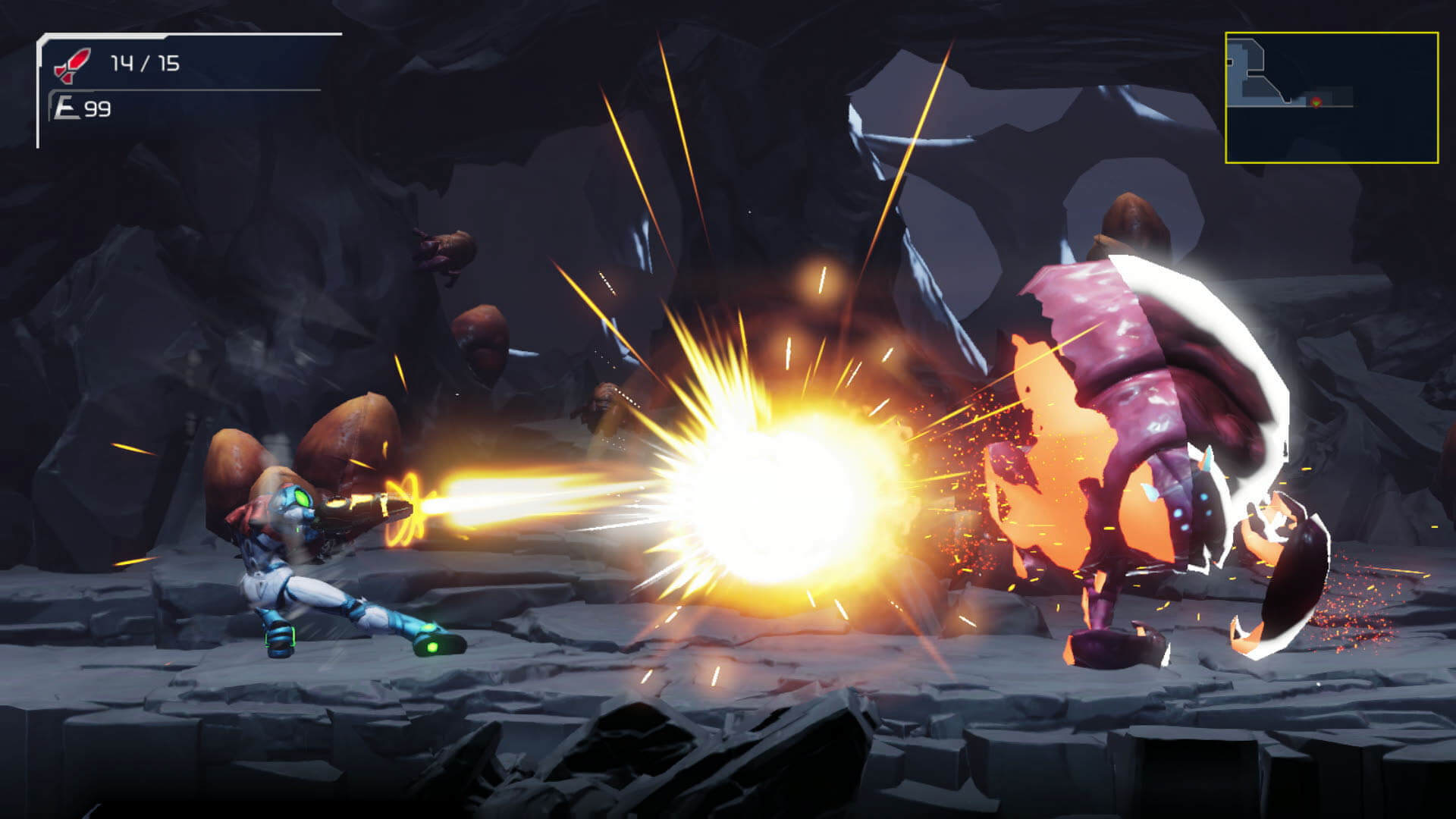 The ways in which the ‘E.M.M.I.’ unnaturally bend and fold while navigating the environment is fantastically unnerving, and their sheer speed and persistence make nearly every encounter with them a terrifying life-or-death situation. The ‘E.M.M.I.’ encounters serve as some of the most challenging parts of Metroid Dread, but they are also some of the most rewarding, as they really test players’ ability to plan their routing and quickly adapt to unexpected scenarios. Metroid Dread would still have been a good game without ‘E.M.M.I.’ robots, but it would not be quite as engaging.

Metroid Dread’s flaws are few and far between, but can occasionally become intrusive. While the controls are mostly rock-solid, they also happen to make use of every button on the controller, which is both a blessing and a curse. While this does allow for quick use of every tool no matter the situation, it also makes it difficult to remember which button does what, especially since the button mapping feels less intuitive than it ideally should.

“While the controls are mostly rock-solid, they also happen to make use of every button on the controller.”

The Switch does have a system-wide button remapping feature, but it is far from a perfect solution, as the feature is disabled outright for third-party controllers. Needless to say, an in-game button-mapping option would have gone a long way toward mitigating this controller issue. Additionally, while the Metroid Dread mostly performs at a smooth 60 frames per second, there are instances in which the framerate gets distractingly choppy, most notably during a few late-game fights. These framerate issues are never enough to hamper the gameplay but are disappointing nonetheless.

Metroid Dread marks an absolutely phenomenal return to the 80s-rooted 2D Metroid saga after a long absence. It succeeds at offering an engrossing, perilous world for players to get lost in as well as a liberating movement and controls system to learn and master while empowering and disempowering players — at just the right moments.

If later Metroid games can consistently maintain this bar of quality, the future of the series would be bright indeed.

Metroid Dread is available now for the Nintendo Switch and Nintendo Switch Lite in both physical and digital form. A special edition is also on offer, that in addition to a haunting steel game case pictured below, includes the game card, five high-quality art cards with key art for each 2D Metroid game, and a 190-page art book spanning all five entries in the 2D Metroid saga. 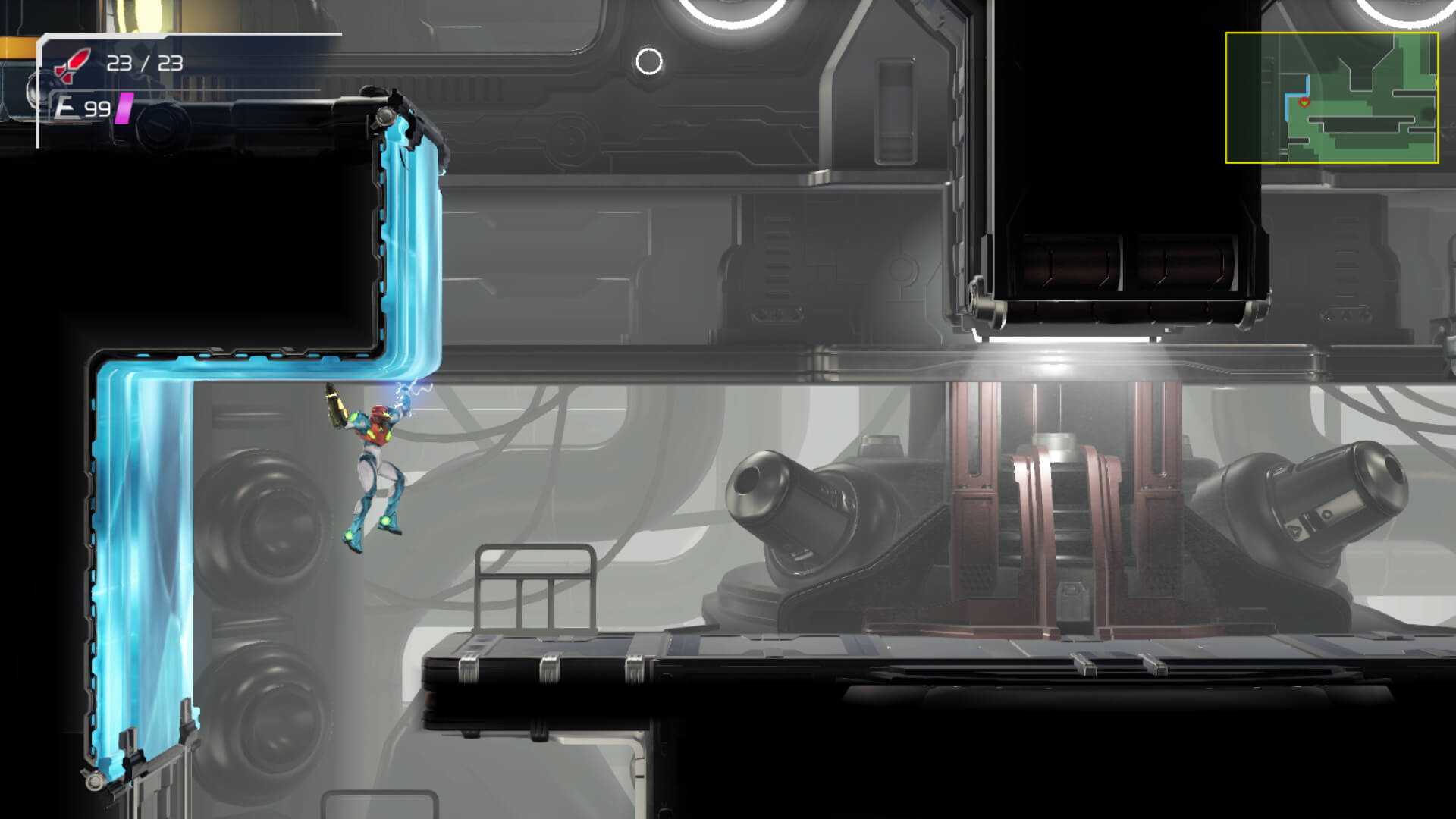 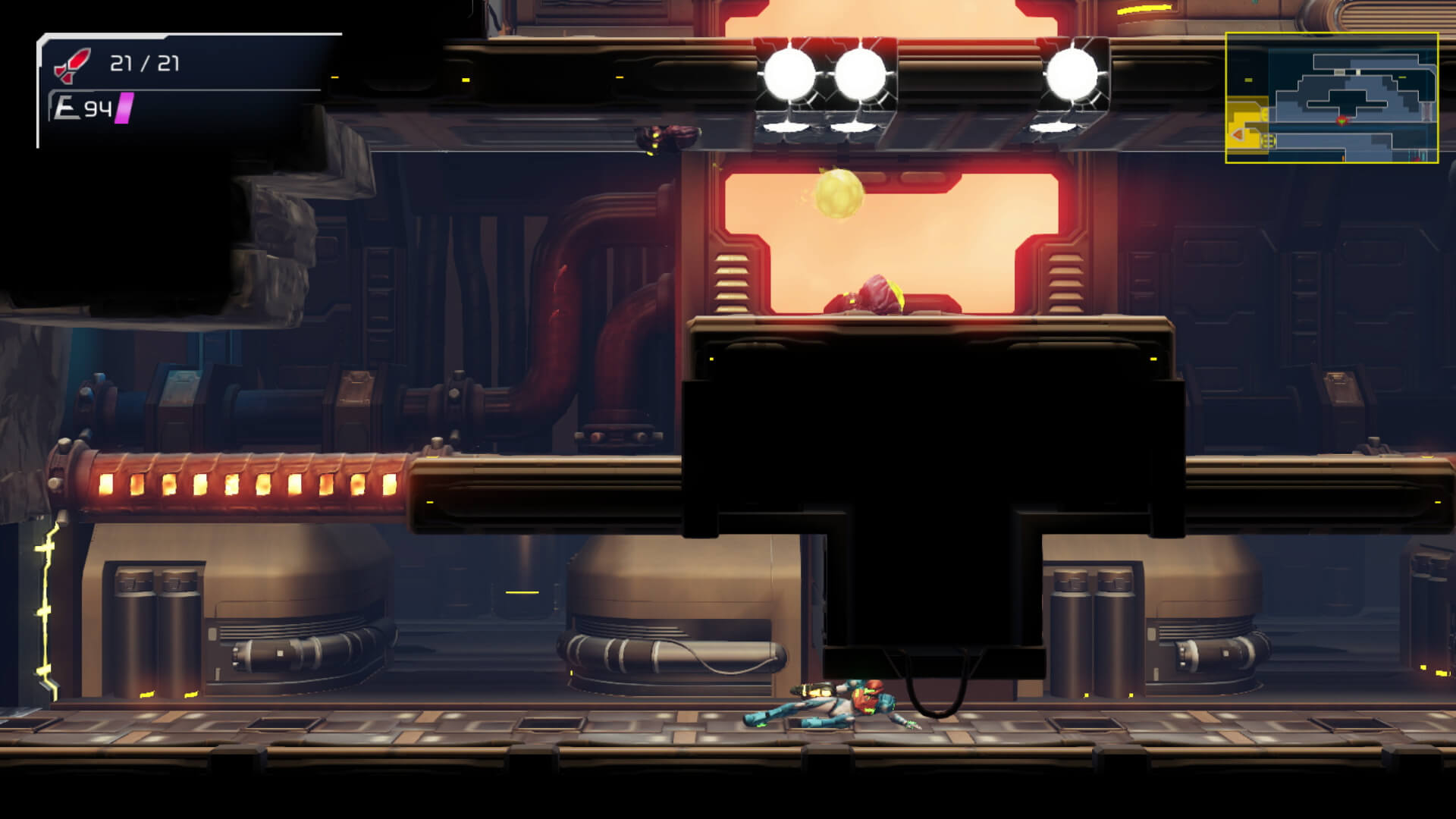 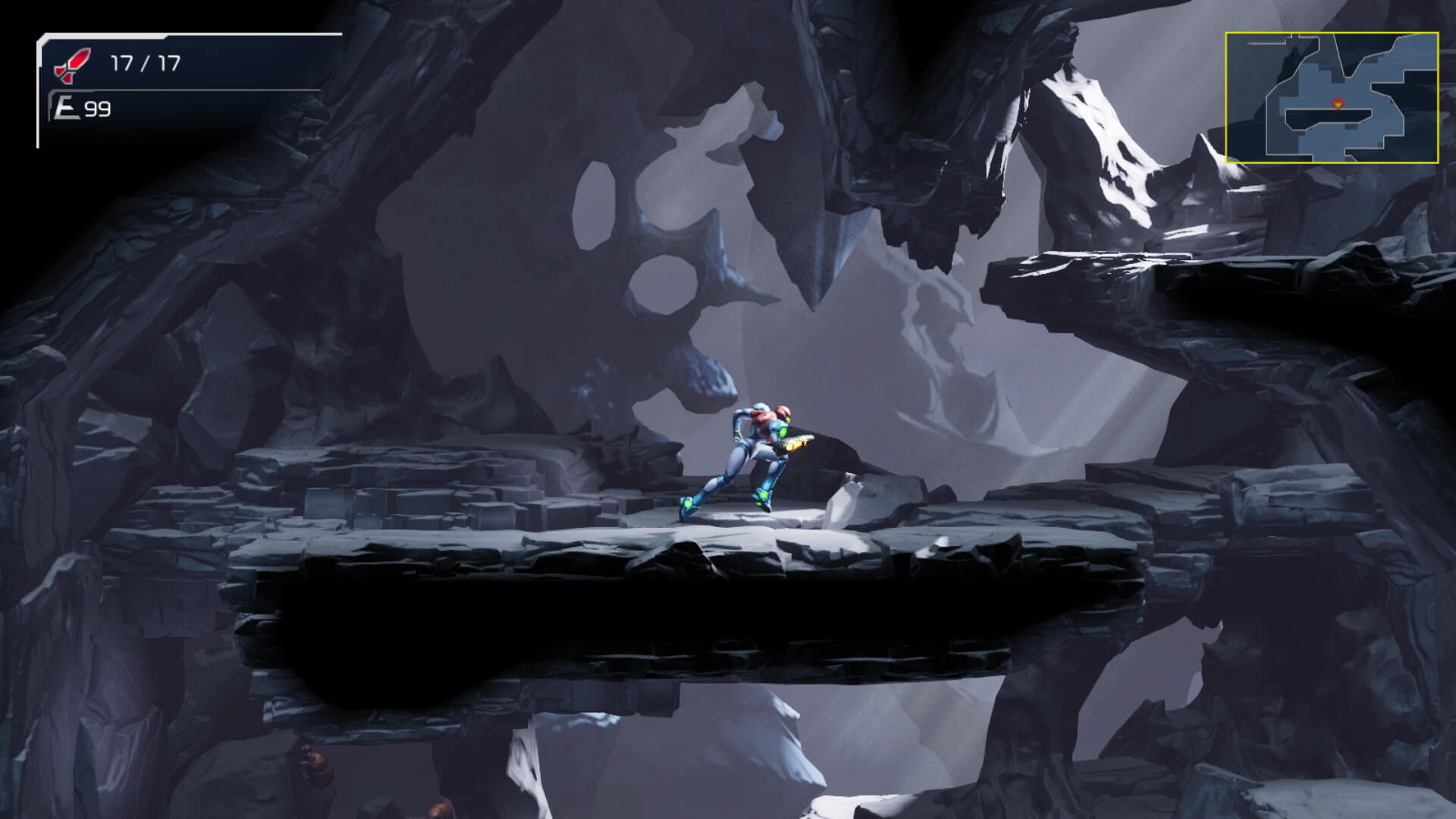 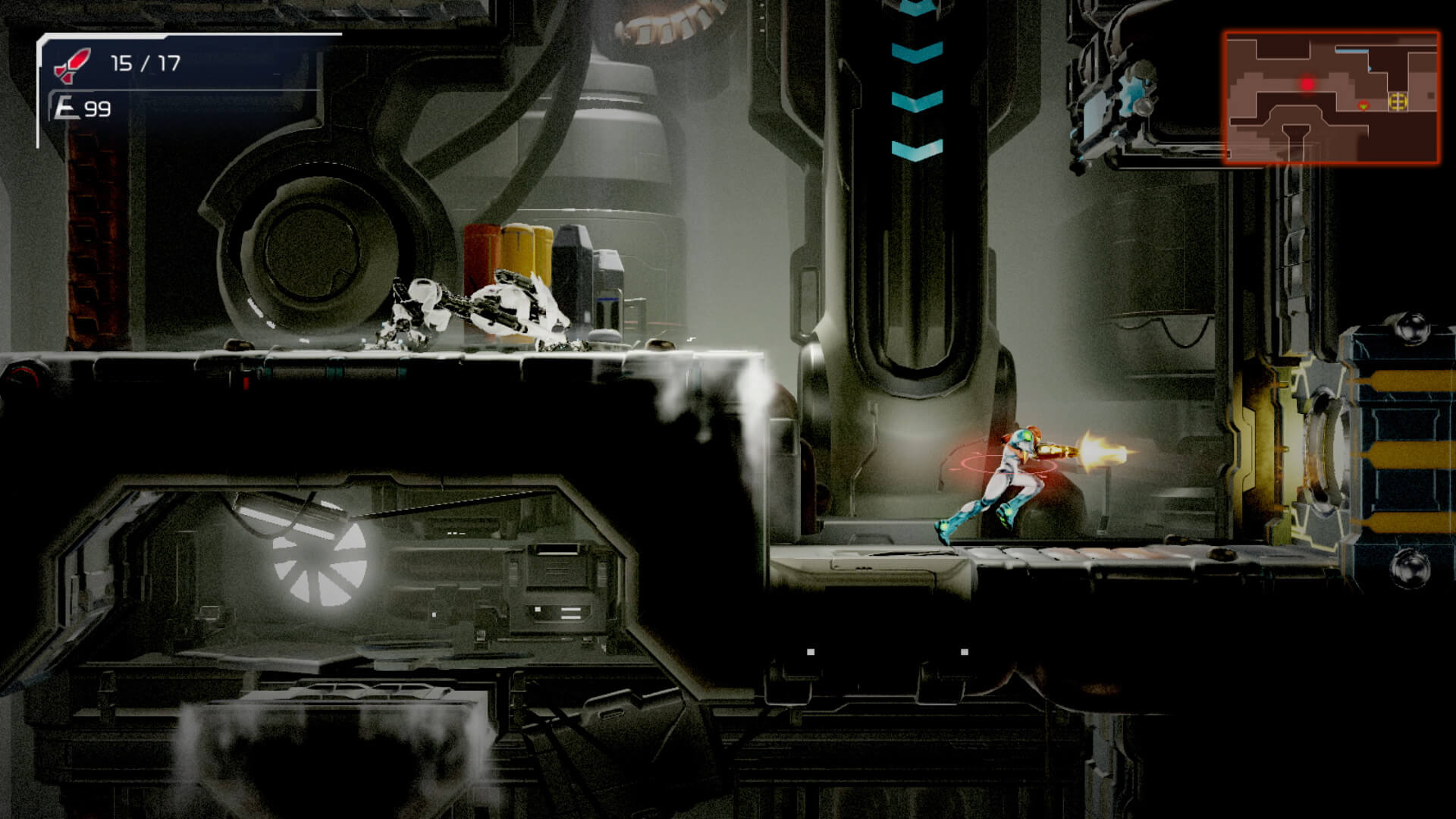 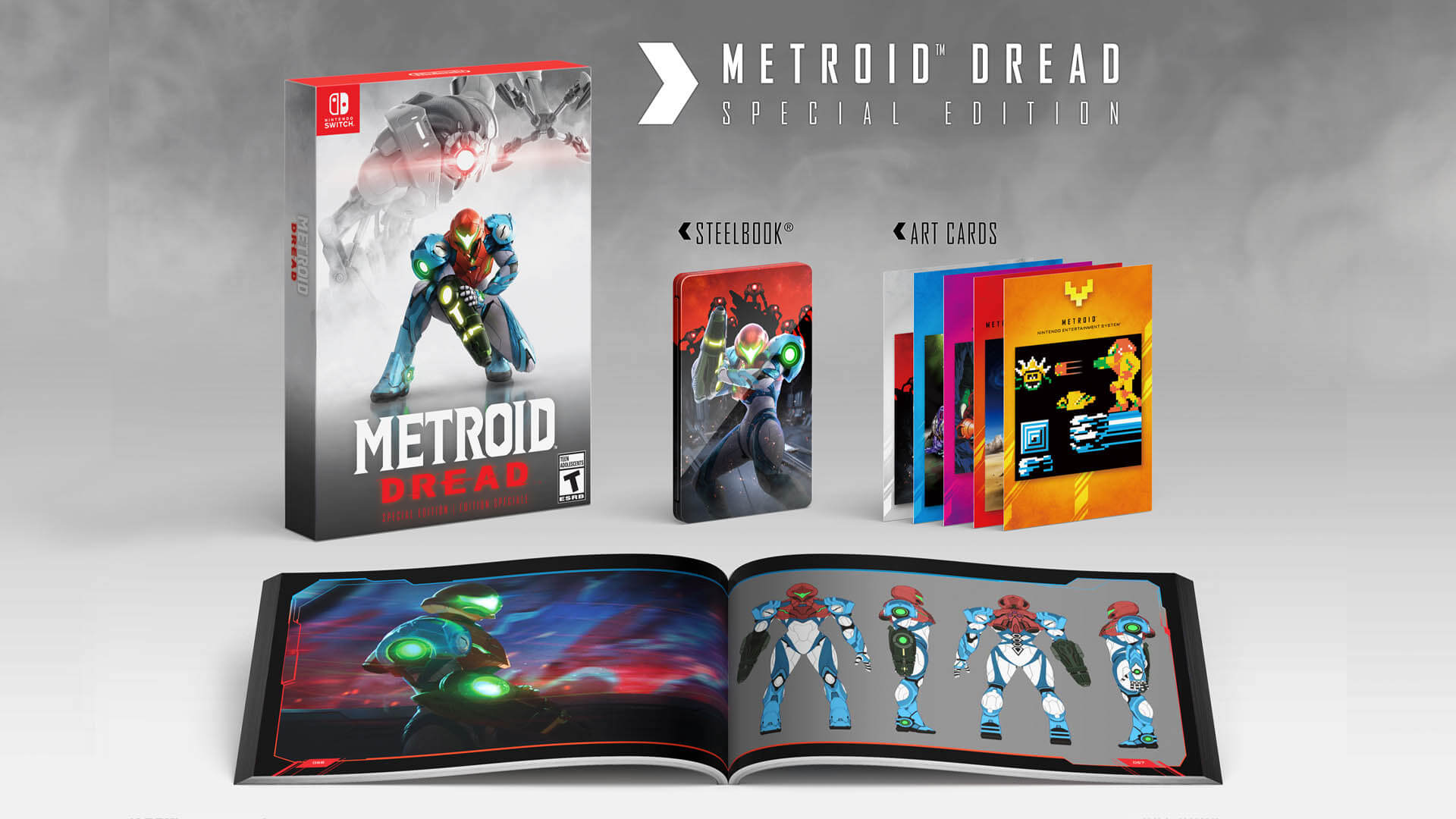