However, the aesthetics are far from the only thing OlliOlli World has going for it; it also happens to be a staggeringly well-made skateboarding game, one with a cavernously deep set of mechanics that continuously encourage both player mastery and expression. If you have any interest in the skateboarding genre, OlliOlli World is a no-brainer purchase.

At first, the sheer mechanical complexity of OlliOlli World is not immediately apparent, as the game spends the first few levels teaching its basic control scheme. Gameplay is viewed from a 2.5D side-scrolling perspective with the player character skating forward automatically. Players perform most of their tricks and (basic) actions using the analog stick, and moving it in various directions before letting go leads to different kinds of trick jumps. Additionally, players can grind on rails and other thin surfaces simply by holding the control stick in any direction. 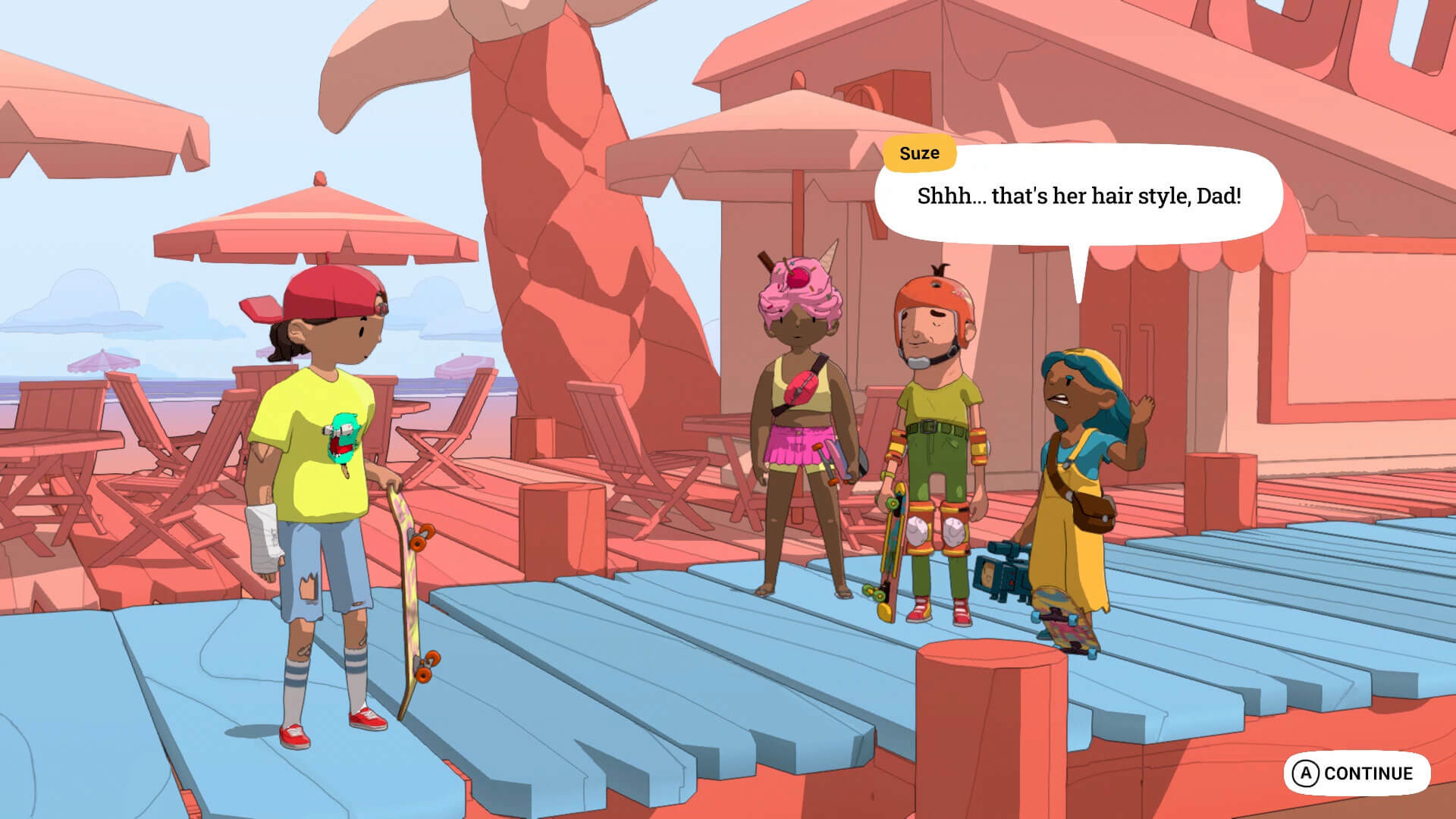 These actions form the core of OlliOlli World’s gameplay, which initially seems rather straightforward in comparison to, say, Tony Hawk’s Pro Skater. Over time, however, the game gradually starts to introduce more mechanics. At the start of the second world, for example, players will learn how to ride on walls, and the game spends the next few levels accustoming players to this mechanic before the third world, which introduces midair grabs, and so on. 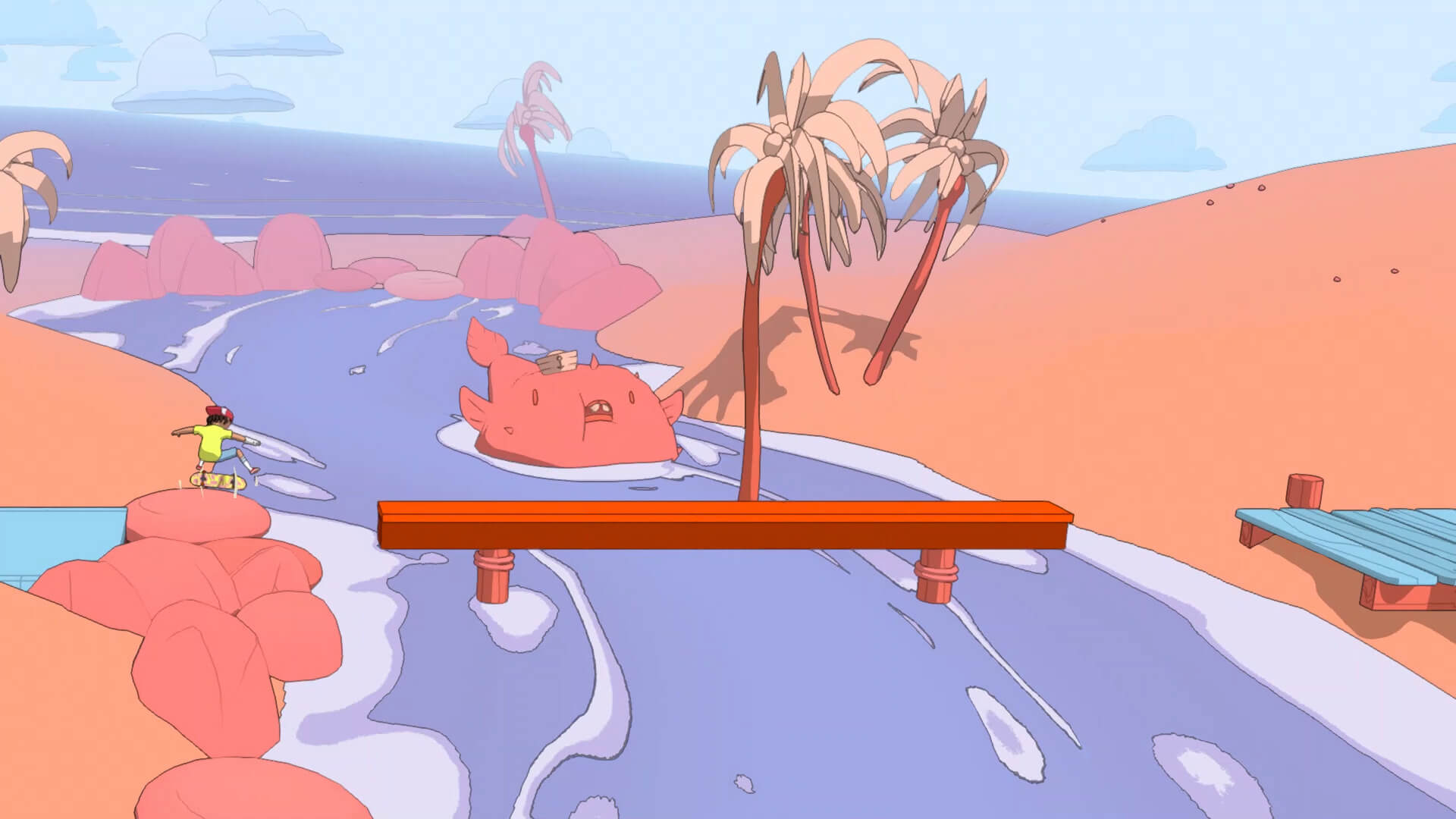 Players will eventually learn how to perform advanced and special tricks, special grinds, late tricks, and more to vary up their gameplay and earn more points. Soon enough, the game will introduce manuals, a game-changing mechanic that allows players to maintain their combo potentially throughout the entire level if they’re skilled enough. By the final few worlds, all these accumulated skills will inevitably result in players performing complex, split-second stick motions and button presses at a near-constant basis to keep up with the game’s increasingly demanding challenges and score thresholds.

Despite the vast array of mechanics and the outrageously high learning curve required to master them, the game’s slow trickle of tutorials as well as the carefully considered rises and dips in difficulty ensure that these gameplay elements rarely become overwhelming. Almost all these skills may technically be available right from the start, but everything from the level designs to the extra challenges and score thresholds is balanced entirely around the skills explicitly taught to the player at that point.

The difficulty of both the levels and optional objectives can get insanely high, especially later on, but players will rarely if ever be underprepared to tackle them. These design decisions are exactly what was needed to have such a mechanically complex game appeal to a wider audience, and they are a large part of why the game never feels discouraging in spite of its stiff challenge.

Of course, effective teaching methods are nothing without a solid gameplay experience, and by all accounts, OlliOlli World is an extremely fun game to play. Much like Tony Hawk’s Pro Skater, the extensive number of options and mechanics ensures players almost never have to go through any downtime, making the game a perfect outlet through which players can experiment and express themselves. The skateboarding physics and sense of momentum are impeccably fine-tuned and intended to be exaggerated but still feel natural. Watching your character accelerate downhill before flying through chains of trick jumps at high speed is always a thrill.

However, it’s the level design that truly allows OlliOlli World’s mechanics to sing. What starts off as simple straight lines with occasional obstacles to avoid escalates into insanely intricate strings of grind rails, rideable walls, and other stage elements that test players’ knowledge and skill of the mechanics to their absolute limit. Most levels also feature multiple pathways that take advantage of the 2.5D viewpoint, with many containing entirely different challenges to overcome and also unique graphical assets to ensure a varied visual experience.

The branching paths already give levels a great degree of depth and replayability, but it’s made even better through the varied ways in which the game experiments with these pathways. For instance, certain levels set up their courses to form a sort of loop, allowing players to rack up more points before moving on to the core goal. 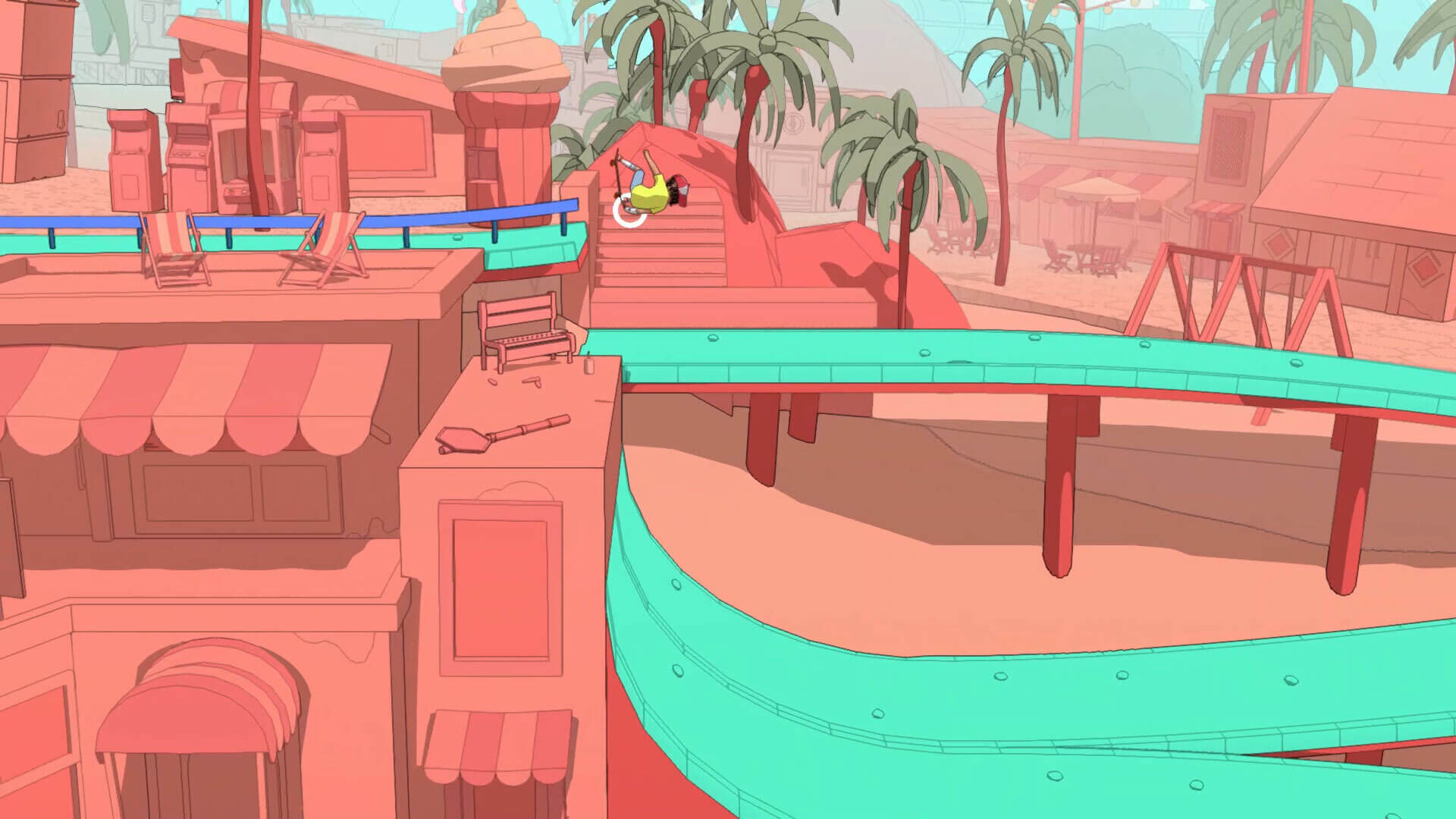 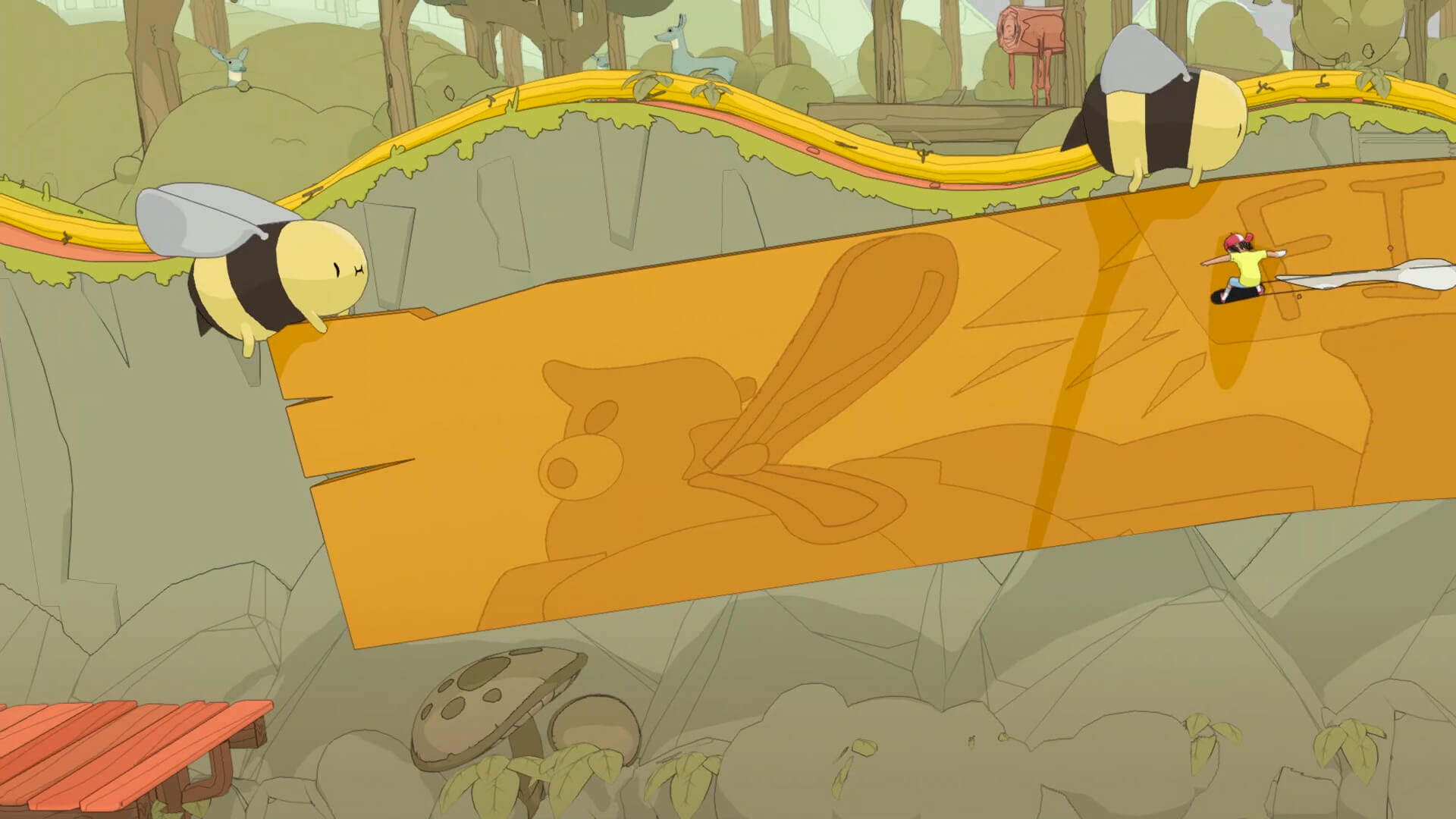 The pathways can even contain temporary platforms or walls that permanently go away once the player has used them, restricting access to additional loops and requiring players to smartly avoid and conserve them until later. The amount of mileage the developers have squeezed out of OlliOlli’s levels is nothing short of impressive, and by the time the credits begin to roll, it truly feels like the game has explored its ideas and gameplay elements to the fullest.

Of course, even a game this good still has its flaws, however minor they might be. OlliOlli World has its fair share of visual glitches which are especially prevalent during loading screens, but ultimately, they don’t impact the experience much. Unfortunately, what does detract from the experience is how unclear the criteria for completing some of the optional challenges can be. There were numerous instances in which I followed the exact instructions the game provided only for the challenge to not count as completed. Oftentimes, it turned out the game expected me to complete the challenge without using any checkpoints. But for whatever reason, the challenges that necessitate a single run tend to avoid explaining this requirement in their descriptions, which inevitably leads to wasted runs that could have been easily avoided with more transparency.

Additionally, one of the later levels may have a small bug that can ruin runs through (seemingly) no fault of the player. One of the billboards in this particular stage is supposed to rise when the player rides it, transporting you to a nearby grind rail. But half the time when I rode the billboard, it ended up not rising at all, which led to instantaneous death. Of course, it’s entirely possible I may have missed something, but this tenacious issue made achieving the high score in this stage way more of a headache than it needed to be.

Aside from these minor problems, OlliOlli World is consistently surprising in its quality. The deceptively intricate mechanics rival those of the best games in the genre, and they give the game a shockingly high skill ceiling that few other modern titles can match. Additionally, the extensive scope of both the individual levels and the main campaign at large allows these mechanics to blossom in a way they otherwise wouldn’t, and it guarantees that players of all skill levels have reason to come back again and again. Simply put, OlliOlli World is rad as hell.

We have reviewed the Switch version of OlliOlli World which is a sports-skateboard game developed by England’s Roll7 and published by the New York-based Take-Two indie publishing label Private Division. The title is available on Nintendo Switch, PlayStation 4, PlayStation 5, Xbox One, Xbox Series X|S, and Microsoft Windows. 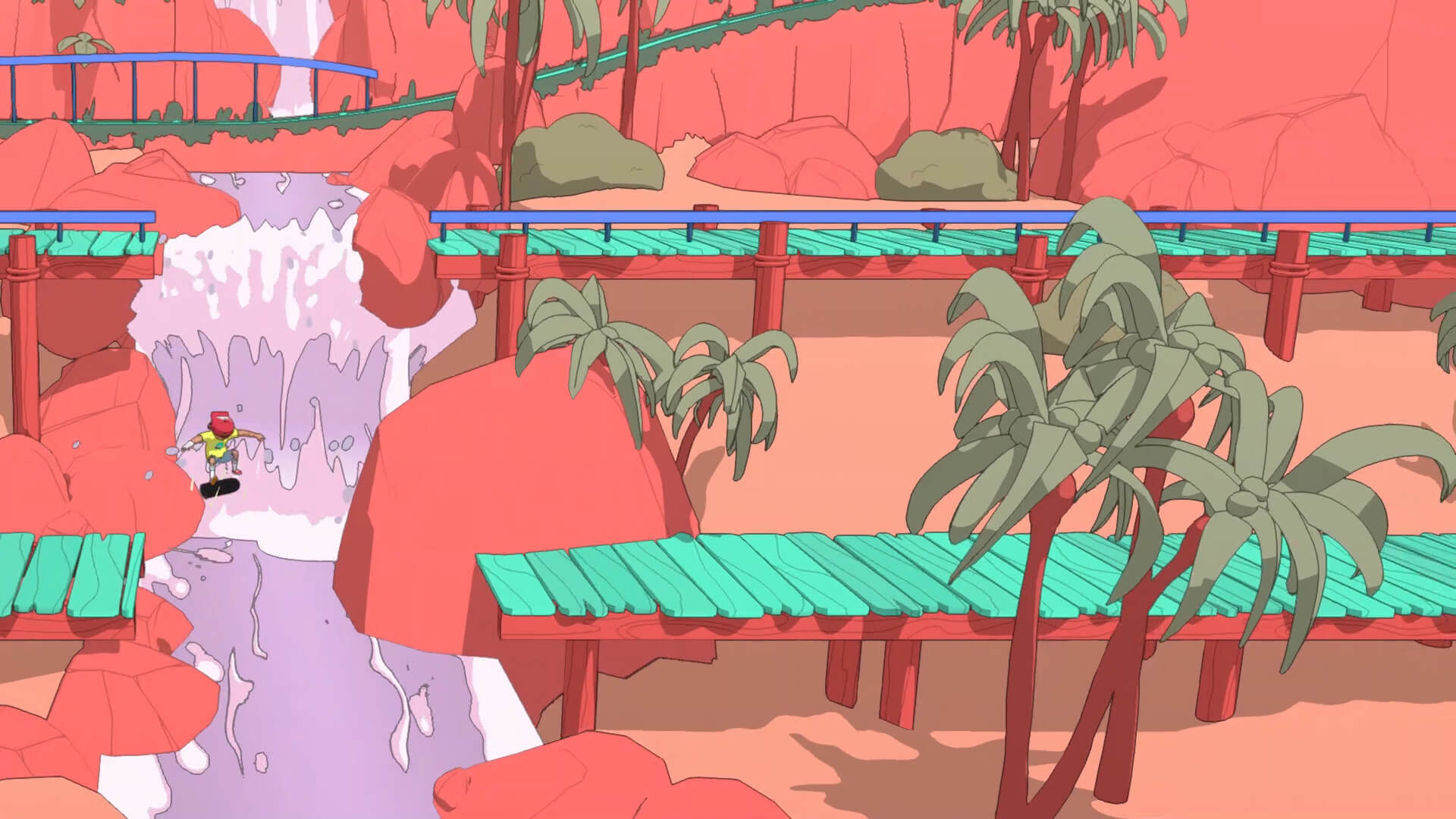